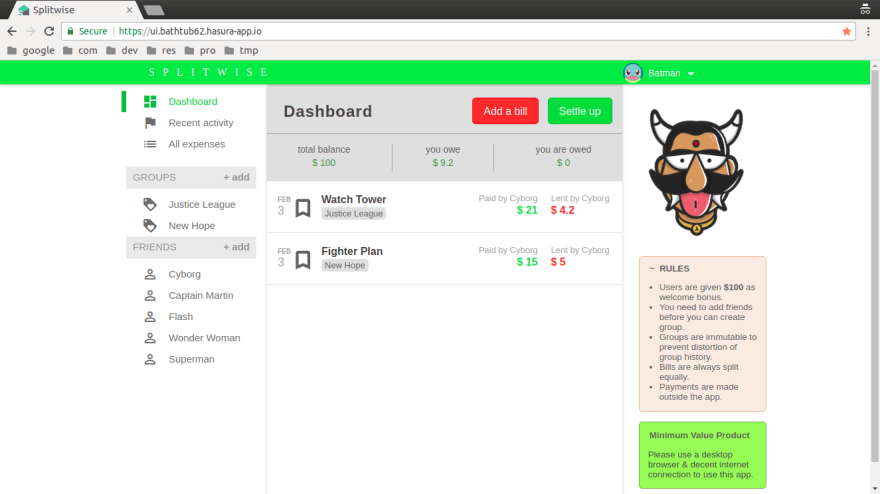 For more technical details regarding the project : Hasura Hub Submission

A Minimum Viable Product is the version of a new product which allows a team to collect the maximum amount of validated learning about customers with the least effort. And the task assigned to us was App clone of Splitwise. This app makes it easy to split bills with friends and family. It allows you to organize all your shared expenses and IOUs in one place, so that everyone can see who they owe.
We had an initial set back as our react-native developer was inactive which left behind only two members in the subgroup myself a ReactJS developer and a Node.js developer at the backend.

So as a react developer I started off by checking out the user interface and features of the original web-app. I made rough designs of the pages on paper then, I decided which of the features to include in the MVP. Also, there were some guidelines provided provided by Hasura.
Up next, was making the action plan which included our deadlines wireframes and database designs. The rest was a journey from wireframes to MVP.

Features of this MVP

I simply stuck to the wire frames in most cases except one where I had trouble opening two dialog boxes side by side so I ended up merging the contents into one.
I divided up the interface into several parts so that I had more control over the components.
The UI has two distinct parts the navbar (AppBar) and rest of the body. The login and signup pages are interchangeable and the only other page is the dashboard. Dashboard is the place where all the action takes place : adding friends, groups, bills etc. For adding friends, groups, bills I used three material-UI dialogs and for displaying the friends, groups, expense history I used material-UI lists and menus. All the displays are dynamic each time user makes some changes the display is
updated in a fraction of second as soon as the api-calls are finished under the hood. It took me some time to use the use the react life-cycle methods to achieve the same. 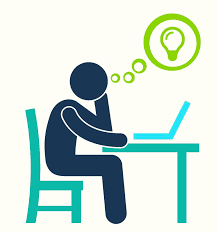 To be honest it's no fun if it isn't difficult. To me the real thrill of programming is solving these problems. This task was challenging in many ways...
we had to deviate from the database design that I had initially though off. We had to add new columns to the tables because of new situations arising like for example in the groups table we added no_of_members because otherwise I would have had to write more code in ReactJS each time I handled the groups.
I got some logical errors that I couldn't understand and after being stuck for days I finally got rid of those portions and rewrote with a different approach altogether.
But, the biggest challenge was not actually implementing these features it was communicating with other group members. Because, to convey your ideas to a random person takes a bit to patience if not communication skills. Most of our communication was no Slack as it's very convenient in-terms of code sharing adding comments to images etc. Fortunately, my teammate was active on slack so even we faced errors we resolved it together.

Overall it was a great learning experience for me.

For the next task we are going to extend the MVP by adding some more features such as selecting user-avatars currently the user avatar is randomly picked out of 5 choices. Also, I plan on refining the UI and UX etc.

Once suspended, rounakpolley will not be able to comment or publish posts until their suspension is removed.

Once unsuspended, rounakpolley will be able to comment and publish posts again.

Once unpublished, all posts by rounakpolley will become hidden and only accessible to themselves.

If rounakpolley is not suspended, they can still re-publish their posts from their dashboard.

Once unpublished, this post will become invisible to the public and only accessible to Rounak Polley.

Thanks for keeping DEV Community safe. Here is what you can do to flag rounakpolley:

Unflagging rounakpolley will restore default visibility to their posts.