It should be noted that when i'm talking about aliases, I mean bash/zsh aliases and not git aliases.

What's the difference? Bash/Zsh aliases are setup in a .bashrc or .zshrc file and allows you to assign a command to a shorthand version. For example, you could alias git log to be gl, which would save you a few characters of typing. Git aliases allow you to similarly assign a git command to a shorthand version, but you still have to type git prior to the shorthand. For example, you could alias the git log command to be l and then you would invoke the command by typing git l. All git aliases are set in a .gitconfig file which is usually found in a computer's HOME directory.

Adds all changes to staging.

Creates a new commit with all staged files and uses the given message as the commit's message.

Adds all files to staging and makes a commit using the given message as the commit's message.

If the previous commit message should be changed, I've aliased git commit --amend --no-edit to gcae. It does the same as gca, but it opens up the git editor to edit the previous commit's message. In my case, I've setup VS Code to be my default git editor since i'm not proficient with VIM. 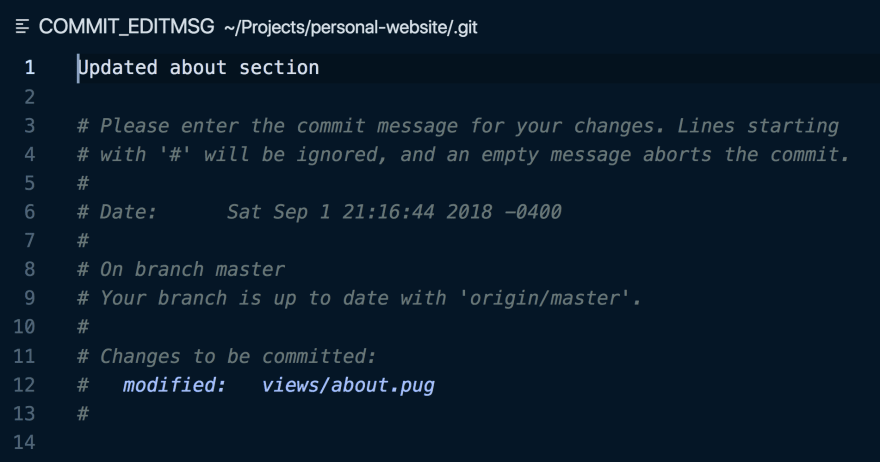 Removes all the changes detected by Git.

Undoes the last commit and moves the files in the commit to staging.

Logs previous commits in a concise manner. The argument passed to --pretty is defining the information that should get displayed for each commit (i.e. commit hash, branch name, commit message, date of commit, and author). Definitely wouldn't want to type this out every time!

Allows to switch between branches.

Overrides the remote branch with the local branch if no one else has commited to the remote. It is considered to be a safer approach than using git push --force.

Fetch updates from the remote and rebase the local branch with the upstream branch. This avoids any merge commits that may occur when using git pull.

Rebases the current branch with another branch.

This is actually a shell command which allows for variables to be passed in as arguments. The $1 is a placeholder for an argument that gets passed to the grn function. This function accepts N as an argument, where N is the number of commits to perform an interactive rebase on.

Accepts a commit hash as an argument and performs an interactive rebase back to the passed commit hash.

Aborts an interactive rebase and restores the git state to the moment the git rebase command was run.

Continues an interactive rebase after conflicts on a commit have been resolved.

Ok, I know that was a lot of aliases, so sorry for rambling on about them. I would encourage others to start aliases more often to speed up their development. Let me know if any of those were helpful or if you've got some favourite aliases you'd like to share.

If you found this article consider following me on Twitter, Github, or LinkedIn.