Building a SaaS product in just 43 days have been a lot of fun, so let's deep dive in to it!

This was originally posted over at robertbrunhage.com you can also find me over on Twitter!

And just to be transparent, here is the first commit and the launch tweet of krossa.io 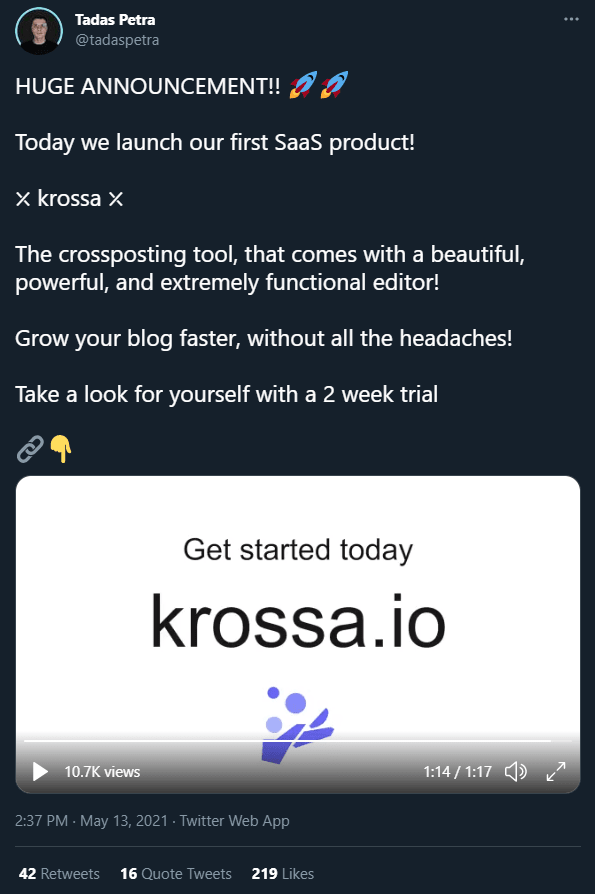 And yes, I regret not having a cool first commit...

This is actually something I made together with Tadas Petra and both of us are content creators mostly focused on YouTube. Though we had an issue which was that we wanted to both move in a bit to the blogging space.

One issue with starting a blog is getting traffic, now both of us could drive a bit of traffic from our YouTube channels but we thought that this wasn't enough, so we started doing something called "crossposting".

Crossposting is when you take your original blog post let's say this one which is published at robertbrunhage.com, and publish it to other platforms as well, such as Medium, DevTo and Hashnode. The reason for this is that you can drive traffic from those platforms over to your website! I personally did this with adding a small message at the top or bottom saying something like "This was originally posted at ...".

But just this simple thing of crossposting your blog could take A LOT of time. For my first blog I did this with, took over an hour which, let's be honest here... I wanted to spend on other things 😅 (Playing games and wasting time).

So we started researching about crossposting more on how to do it effectively which in the end mostly cut the time from a bit over an hour per post to about an hour. To us, these were no solutions.

We thought about the idea of a platform that would do everything for you and this is the flow we came up with.

TLDR of the stack

The reason we went this route was that we had some requirements that made us go with Next.js such as being able to have a blog on the website and both of us prefer a typed language which TypeScript helped with!

Now in my opinion the one that helped us create krossa.io in such a short amount of time is Firebase. There were so many things handled for us right of the bat, such as

We launched krossa.io in 43 days and we believe it will help A LOT of bloggers find their audience.

The problem was that crossposting took too much time and this was our solution for a platform:

TLDR of the stack

If you found this interesting and you are a blogger or thinking about becoming one,consider krossa.io as even this was posted from it 😎

A Guide to user authorization in Nextjs

Robert Brunhage 💙
Ex Volvo Software Engineer that writes mostly about Flutter but could be more dev related content in the future! 25 000 subs and growing! YouTube: http://youtube.com/robertbrunhage
Flutter Web Opinions & Why I Choose Next
#flutter #dart #nextjs