First of all, you might ask yourself, what is SSH?
Well, in short, SSH stands for Secure Shell. It allows you to gain, cryptographically secured, command-line (shell) access on a remote machine.

Remote machine can be your web or build server, or any other machine that can be accessed via SSH.

Establishing an SSH connection is pretty straightforward. But, before it can be done, you need to know username and hostname, or IP address, of the server.

So basically, you will use the SSH client, on your machine, to connect with the SSH server on the remote machine. Assuming you are on macOS or Linux, you can run the following command to connect via SSH.

If you are connecting with the server for the first time, you will be asked to confirm server identity. If you confirm it, the public key of the server will be saved into your local ~/.ssh/known_hosts file. Next time you try to connect, your known_hosts file will be checked and since the server public key is already added there, this step will be skipped.

As a next step, you will be asked for a password to confirm that you are authorized to access the server. If provided password is not correct, connection will be rejected.

As you might have already noticed, every time you want to establish an SSH connection with the remote machine, you will have to enter a password. This approach is good if you don't access the server frequently, but even so, it is still better to use SSH keys instead.

If you are currently connected via SSH, go ahead and run following command.

It will terminate the currently running SSH session. Now, let's check out what are those SSH keys.

SSH protocol uses SSH keys as an access credential. This means that, instead of the password that was used before, you can use SSH keys to connect to the server. Other than that, SSH keys are much more robust, longer and complex than any password could ever be. As such, they are a better and more secure method of authentication.

Public key can be shared freely with others, while private key must be saved securely and only the key owner should know its value.

There is one more important key called session key. This key is negotiated by both parties, client and server, during the connection process. Session key is generated using a version of the Diffie-Hellman algorithm. This algorithm works in a way that both parties contribute equally to the generation of the session key. Because of the nature of the algorithm, the session key represents a shared symmetric key. It means that this key can be used for both encryption and decryption. 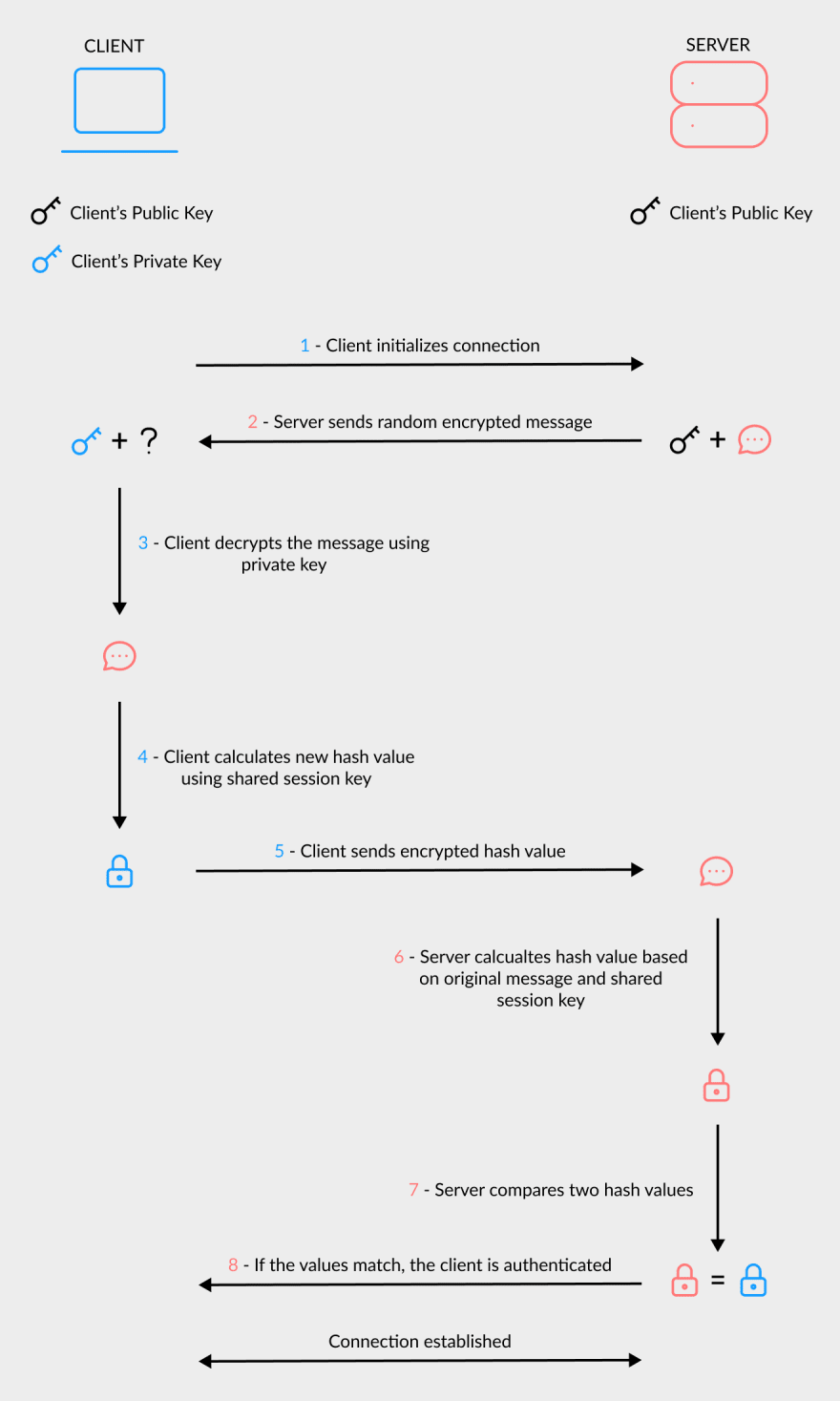 By now, you might ask yourself, how can I generate those SSH keys?
SSH keys can be generated really quickly using following command.

This command will create SSH keys using your the email address as a label. Optionally, you can pass -f flag where you can specify file name for SSH keys.
If -f flag is not provided, you will be prompted to provide file name or you can press enter to accept default. If you press enter, file name id_rsa will be used as a default.

Next, you will be asked to enter a passphrase. If a passphrase is provided, it will be required when ever key is used. This can be useful if someone gains access to the machine where private key is stored, since they will not be able to use private key without correct passphrase.

When command finishes running, you shold see following files in your ~/.ssh directory.

This command will copy your public key to the clipboard. Now, coppied public key needs to be added into the ~/.ssh/authorized_keys file on the server. To do so, login to the server using password authentication.

Once you gain access to the server, run following command.

It will paste your, previously copied, SSH key and append it at the end of the content in ~/.ssh/authorized_keys file.

Execute following command to confirm that your public key is saved.

You should see content of authorized_keys file printed in terminal window. Your public key should be printed as a last item.

Now, execute logout command to terminate current SSH session.
Next time you start a new SSH connection with the same server, authentication will be made using SSH keys.

This way of authentication is often used on CI/CD to automate processes and authenticate machines without user interaction.

Today, SSH and SSH keys are incredibly important and used everywhere. From online services to automatically authenticate each other to your Github account to push the code changes.

You don't have to be a Secure Shell expert by any means, but knowing the basics can come a long way. I hope this post has provided you with just that - the basics.

Redirect traffic to another IP

My first i3 rice

Once suspended, rmmgc will not be able to comment or publish posts until their suspension is removed.

Once unsuspended, rmmgc will be able to comment and publish posts again.

Once unpublished, all posts by rmmgc will become hidden and only accessible to themselves.

If rmmgc is not suspended, they can still re-publish their posts from their dashboard.

Once unpublished, this post will become invisible to the public and only accessible to Ramo Mujagic.

Thanks for keeping DEV Community 👩‍💻👨‍💻 safe. Here is what you can do to flag rmmgc:

Unflagging rmmgc will restore default visibility to their posts.