UML is an abbreviation of Unified Modeling language. The history of UML started in the mid of the 90's and today we are at version 2.4.1. It has several alternative versions and extensions, like SysML. UML is modelling by using different types of diagrams. UML is the way of representation. Later on based on your goals you can draw UML diagrams by hand on a table or on a white board, by using paint or by using a professional UML editor. There are several UML editor tools, some of them are free for use (ex.: Umbrello), others costs a lot (ex.: Enterprise Architect). Some of them are just like a specialized drawing tool, others are including a lot of features, like version control, connections between diagrams or even code generation on a certain level.

I also tried out several free UML tools and it was really challenging to find one which can save the diagrams as pictures in a proper way and which can draw all types of diagrams in the standardized way.

Below I made a short introduction into the most popular UML diagram types.

The first big group of diagrams describe the structure of your software. 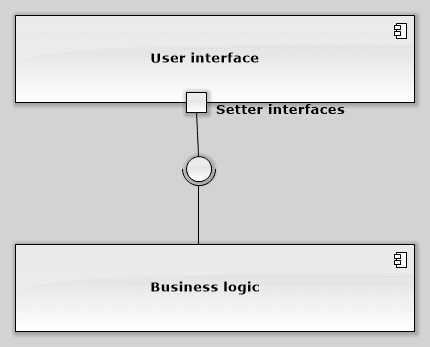 A component diagram stands for modelling the high level architecture or your code.

It’s main elements are the following: 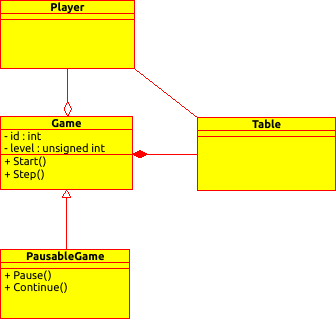 The next section represents the operations (functions and methods) of the class.

In several cases the class diagram simple ignores the attributes and/or the operations and concentrates only on the connection of different classes.

The classes can be connected to each other in four different ways:

Object diagram is not so popular as class diagram, but it can also be really useful in some cases. It is representing the state of the objects (instances of classes) of an object oriented program in one dedicated point of time. Each object is represented by a rectangle. In the top part of the rectangle there’s the name of the object (“player1”) : Type of the object (Player). Below that you can list the attributes of the objects with their actual value. The objects can be connected to each other (like game has two players and a table). 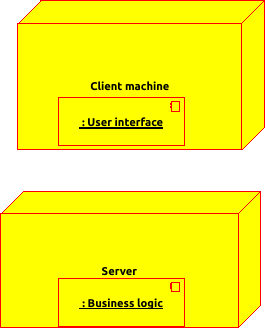 Deployment diagram is useful if your software is distributed on multiple different machines. You can add machines to the diagram (devices), like “Client machine” and “Server” on the picture and you can assign the software components to them which running on the given device.

The second big group of diagrams is the behavioural (dynamic) diagrams. Their purpose is to describe how the software behaves in different use cases.

The sequence diagram describes the communication between the different object or software components in a dedicated use case.

The above example describes a login procedure in case of a web portal.

The first element in the top left corner is an actor, which represents the user itself. The user calls the Login method (clicks on the login button). The event will be handled by the user interface. This is represented by a rectangle. Here it is also possible to add an object : Type pair. The dashed line below is the life time of the object/component. In this case the life time is the same for all components, but it could differ from each other. It is also possible to create on object later by a dedicated call or destroy it earlier. In this case the life time line should of course shorter.

As the next step the user interface is calling itself to check if the user name form is not empty. After this call there’s a big red rectangle with the tag “alt” in the top left corner. This represents that the part inside the rectangle will be only executed if the condition “user name is not empty” is true. Otherwise it won’t run. Instead of alt we could also use a loop.

So if the given username is not empty the User interface calls the Business logic.

Of course a sequence diagram can be done in a more or less detailed way. 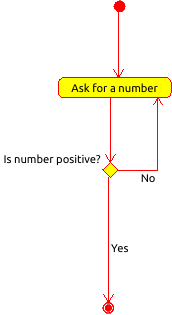 The diagram type called activity diagram is maybe the easiest one, since it is nothing else then a well formulated flow chart. The filled circle is always the start point of our program/algorithm. The flow of the program or algorithm is represented by arrows. The rounded rectangle (like “Ask for a number”) represents an activity. And the diamond represents a decision (in this case if the given number is positive). From the decision start always multiple arrows, which are labeled by the result of the decision (here Yes or No). In some representation there is also a merge element which is also a diamond. A merge element has always multiple incoming line and only one which is started from that. In this case I missed this element and I connected it back directly to the action “Ask for a number”.

The last element to mention is the filled circle inside the unfilled circle which is always the endpoint of the program of algorithm. A program can have multiple endpoints.

So the above diagram represents a short program which is keep on asking for a number until the given number is not positive.

The state diagram is used to represent state machines. The start point and end point is represented similarly as in the activity diagram. The transmissions are represented by arrows. The dedicated states of the program are marked with rounded rectangles. The state machine can also have multiple end points. It is also possible to have parallel states or add substates to an already existing state. The advantage of this representation of your program is that it’s giving a good, human readable overview and at the same time, it's easy to convert it into source code. 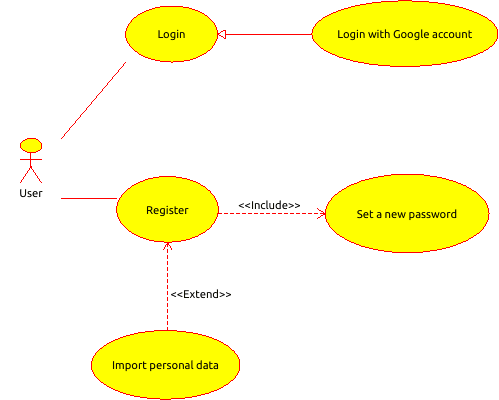 The so called actor is represented by a stick figure, in the case of this diagram we call it “User”. It is also possible to have multiple actors (like users with different permissions) and it can also be the case that the actor doesn’t represent a human, but another system using our program.

The functionalities which can be used are called use cases. They are represented by an ellipse and they can be connected by a line directly to the actor or they can be also connected to an other use case by specific connectors. In case of the example we have to main use cases: Login and Register.

The connectors between use cases can be the followings:

Use case diagram is a perfect tool to represent the high level functionality of the program in a human readable way.

UML is a pretty strong tool to represent the software in a human readable format. It is a good basis also for technical discussions. However it should be considered that pretty often the same things are represented in different ways, since it is just semi-formal.