In this tutorial we'll introduce test-driven development and you'll see how to use pytest to ensure that your code is working as expected.

pytest lets you specify inputs and expected outputs for your functions. It runs each input through your function and validates that the output is correct. pytest is a Python library and works just like any other Python library: you install it through your package manager and you can import it into your Python code. Tests are written in Python too, so you'll have code testing other code.

Test-driven development or TDD is the practice of writing tests before you write code. You can read more about TDD and why it's popular on Wikipedia.

Creating a project structure for pytest

For large projects, it's useful to keep your testing code separate from your application code. In order for this to work, you'll need your files set up in specific places, and you'll need to create individual Python modules so that you can refer to different parts of the project easily.

Create a new Python repl called namesplitter. As always, it'll already have a main.py file, but we're going to put our name splitting function into a different module called utils, which can house any helper code that our main application relies on. We also want a dedicated place for our tests.

Create two new folders: one called utils and one called tests, using the add folder button. Note that when you press this button it will by default create a folder in your currently active folder, so select the main.py file after creating the first folder or the second folder will be created inside the first folder.

You want both the folders to be at the root level of your project.

Now add a file at the root level of the project called __init__.py. This is a special file that indicates to Python that we want our project to be treated as a "module": something that other files can refer to by name and import pieces from. Also add an __init__.py file inside the utils folder and the tests folder. These files will remain empty, but it's important that they exist for our tests to run. Their presence specifies that our main project should be treated as a module and that any code in our utils and tests folders should be treated as submodules of the main one.

Finally, create the files where we'll actually write code. Inside the utils folder create a file called name_helper.py and inside the tests folder create one called test_name_helper.py. Your project should now look as follows. Make sure that you have all the files and folders with exactly these names, in the correct places.

Splitting names is useful in many contexts. For example, it is a common requirement when users sign up on websites with their full names and then companies want to send personalised emails addressing users by their first name only. You might think that this is as simple as splitting a name based on spaces as in the following example.

While this does indeed work in many cases, names are surprisingly complicated and it's very common to make mistakes when dealing with them as programmers, as discussed in this classic article. It would be a huge project to try and deal with any name, but let's imagine that you have requirements to deal with the following kinds of names:

Specifically, you can assume that once you find a name starting with a lowercase letter, it signifies the start of a last name, and that all other names starting with a capital letter are part of the first and middle names. Middle names can be combined with first names.

Of course, this does not cover all possibilities, but it is a good starting point in terms of requirements.

Using TDD, we always write failing tests first. The idea is that we should write a test about how some code should behave, check to make sure that it breaks in the way we expect (as the code isn't there). Only then do we write the actual code and check that the tests now pass.

Writing the test cases for our names function

Now that we understand what our function should do, we can write tests to check that it does. In the tests/test_name_helper.py file, add the following code.

Note that the namesplitter in the first line is taken from the name of your Repl.it project, which defines the names of the parent module. If you called your project something else, you'll need to use that name in the import line. It's important to not include special characters in the project name (including a hyphen, so names like my-tdd-demo are out) or the import won't work.

The assert keyword simply checks that a specific statement evaluates to True. In this case, we call our function on the left-hand side and give the expected value on the right-hand side, and ask assert to check if they are the same.

This is our most basic case: we have two names and we simply split them on the single space. Of course, we haven't written the split_name function anywhere yet, so we expect this test to fail. Let's check.

Usually you would run your tests by typing py.test into your terminal, but using Repl.it things work better if we import pytest into our code base and run it from there. This is because a) our terminal is always already activated into a Python environment and b) caching gets updated when we press the Run button, so invoking our tests from outside of this means that they could run on old versions of our code, causing confusion.

Let's run them from our main.py file for now as we aren't using it for anything else yet. Add the following to this file.

You should see some scary looking red failures, as shown below. (pytest uses dividors such as ====== and ------ to format sections and these can get messy if your output pane is too narrow. If things look a bit wonky try making it wider and rerunning.)

If you read the output from the top down you'll see a bunch of different things happened. First, pytest ran test discovery and found one test. It ran this and it failed so you see the first red F above the FAILURES section. That tells us exactly which line of the test failed and how. In this case, it was an AttributeError as we tried to use split_name which was not defined. Let's go fix that.

Head over to the utils/name_helper.py file and add the following code.

This is the very simple version we discussed earlier that can only handle two names, but it will solve the name error and TDD is all about small increments. Press Run to re-run the tests and you should see a far more friendly green output now, as below, indicating that all of our tests passed.

Before fixing our function to handle more complex cases, let's first write the tests and check that they fail. Go back to tests/test_name_helper.py and add the following four test functions beneath the existing one.

Rerun the tests and you should see a lot more output now. If you scroll back up to the most recent ===== test session starts ===== section, it should look as follows. 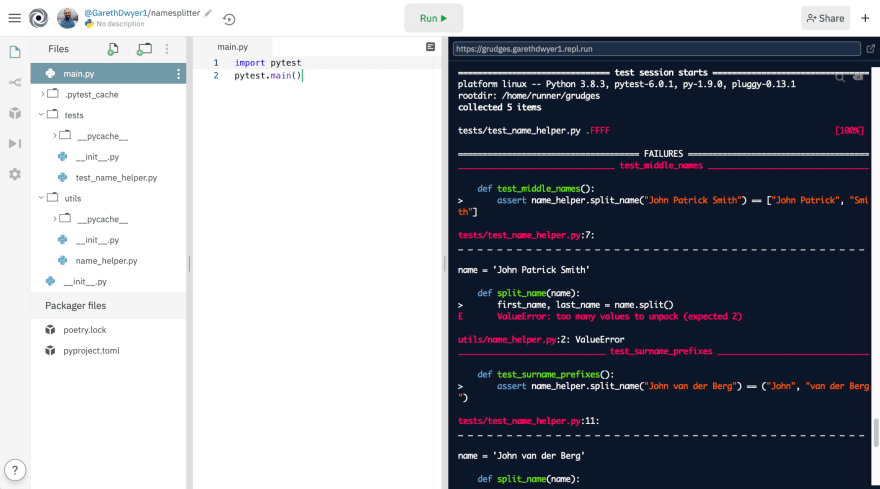 In the top section, the .FFFF is shorthand for "five tests were run, the first one passed and the next four failed" (a green dot indicates a pass and a red F indicates a failure). If you had more files with tests in them, you would see a line like this per file, with one character of output per test.

The failures are described in detail after this, but they all amount to variations of the same problem. Our code currently assumes that we will always get exactly two names, so it either has too many or too few values after running split() on the test examples.

Go back to name_helper.py and modify it to look as follows.

This should handle the case of zero, one, or two names. Let's run our tests again to see if we've made progress before we handle the more difficult cases. You should get a lot less output now and three green dots, as shown below.

The rest of the output indicates that it's the middle names and surname prefix examples that are still tripping up our function, so let's add the code we need to fix those. Another important aspect of TDD is keeping your functions as small as possible so that they are easier to understand, test, and reuse, so let's write a second function to handle the three or more names cases.

Add the new function called split_name_three_plus() and add an else clause to the existing split_name function where you call this new function. The entire file should now look as follows.

The new function works by always appending names to the first_names list until it gets to the last name, or until it encounters a name that starts with a lowercase letter, at which point it adds all of the remaining names to last_names list. If you run the tests again, they should all pass now. 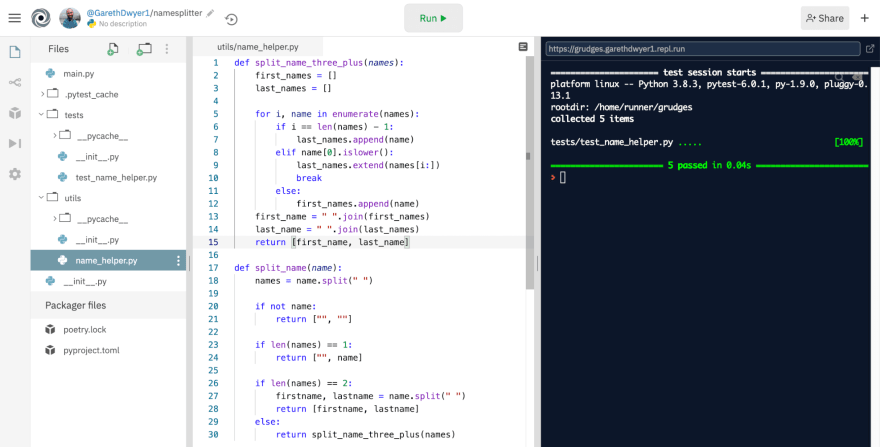 The tests were already helpful in making sure that we understood the problem and that our function worked for specific examples. If we had made any off-by-one mistakes in our code that deals with three or more names, our tests would have caught them. If we need to refactor or change our code in future, we can also use our tests to make sure that our new code doesn't introduce any regressions (where fixing problems causes code to break on other examples that worked before the fix.)

Let's build a very basic application to use our function. Replace the testing code in main.py with the following.

If you run this, it will prompt the user for their name and then display their first and last name.

Because you're using the main.py file now, you can also invoke pytest directly from the output console on the right by typing import pytest; pytest.main(). Note that updates to your code are only properly applied when you press the Run button though, so make sure to run your code between changes before running the tests.

Make it your own

We've written a name splitter that can handle some names more complicated than just "John Smith". It's not perfect though: for example, if you put in a name with two consecutive spaces it will crash our program. You could fork the project and fix this by first writing a test with consecutive spaces and then modifying the code to handle this (and any other edge cases you can think of).

You've learned to do TDD in this project. It's a popular style of programming, but it's not for everyone. Even if you decide not to use TDD, having tests is still very useful and it's not uncommon for large projects to have thousands or millions of tests.

Take a look at the big list of naughty strings for a project that collects inputs that often cause software to break. You could also read How SQLite Is Tested which explains how SQLite, a popular lightweight database, has 150 thousand lines of code and nearly 100 million(!) lines of tests.

In the next tutorial, we'll show you how to become a Repl.it poweruser by taking advantage of the productivity features it offers.

How to Build a Cross-Platform Desktop Application in Python