Distributed systems are hard, and things can often get much more difficult when problems arise. This is only exacerbated by the fact that many of these systems can be notoriously difficult to dig into when they are actually out in the wild and not just running "on your machine".

They say that a picture is worth a thousand words, but in the world of distributed systems, a picture can easily be worth a thousand hours. While I can't promise you that this post will in any way save you a thousand hours, I hope that you find value in the thought process that I explored when introducing tracing and visibility into an Apache Beam pipeline.

What is Your Quest? What Do You Seek? 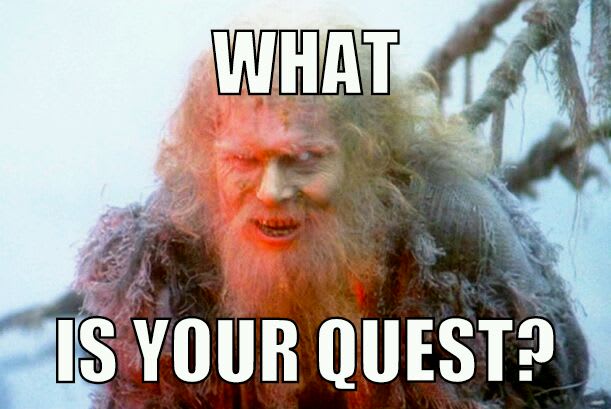 Before embarking on this journey, it was important to establish a few reasons why tracing is important, both in a development and production sense, as well as what the overarching goal of introducing it would be.

These are the few that I came up with:

Choose Your Own Adventure

Approaching the problem given my previous experience with Kafka and still (at the time) being relatively new to working with Beam, the following three approaches came to mind:

After some exploration, we found that the approach with the least overhead was simply adjusting the records themselves such that each record could be responsible for persisting its own trace (aka the "Data" Approach).

The Wrapper had significant overhead with regards to coding issues after transforms and added another layer of complexity when trying to retrieve the elements to operate on. The Kafka record lent itself too heavily to Kafka and made transforming difficult, not to mention it was inefficient since it persisted information specific to Kafka throughout the process (e.g. topic names, partitions, etc.)

Take These, You’ll Need Them! 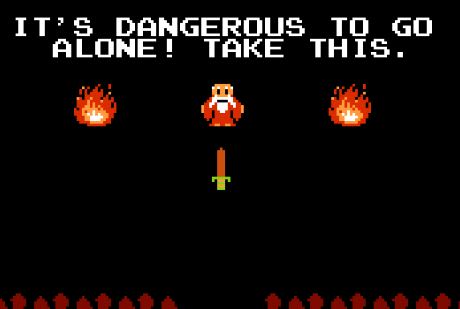 With the hopes of following open-standards like those defined by OpenTracing, I figured it best to explain a bit about what goes into a trace. These terms come up frequently when discussing tracing and frameworks that handle it, so it could hurt before we embark into the code.

As mentioned earlier, a picture can say a thousand words, so it’s probably worth providing a very rudimentary example of what these pieces look like composed together, or what a timeline between actual actions and operations in the system parallel with a series of traces:

If we look at the diagram above, we can see how a given series of operations within an Apache Beam pipeline can parallel with building a trace to allow visibility into the pipeline. From the first encounter, a context will be created for the trace and spans will be associated with the context as it travels through the pipeline. It'll provide opportunities to tag searchable properties, output exceptions and logs, and much, much more.

The Adventure Begins (Using and Building a Trace)

There are four components necessary to initialize or create a trace/span within Beam, which this section will cover:

As mentioned in the previous section, a span context can come in a variety of forms (such as a byte[], map, HTTP Headers, etc.). If you want to perform tracing at the element level, you'll want to ensure that your specific class or element has something defined to store it:

Likewise, if you were defining an Avro schema, this context might be defined as follows:

Configuring the tracer is a requirement if you want to start sending your traces to Jaeger or another service that handles distributed tracing via the OpenTracing standard. Thankfully, it's quite easy to configure via a custom TracingOptions class that your overall Apache Beam pipeline can inherit from:

This will allow this configuration to be driven from command line arguments, files, or environmental variables. Next, you'll want to make sure that your overall pipeline inherits from these so they can be accessible via the pipelineOptions property within your transforms:

After your individual elements and tracing has been configured, you are ready to build your first trace. Since tracing is done at the element-level, you'll only be able to interact with the tracer at the DoFn level within Apache Beam. As such, there are two ways to handle this, you can either explicitly initialize this during the @StartBundle operation of a given transform as seen below:

This static reference will allow you access to the tracer which will be used to build your traces and send them to Jaeger (or not do anything if you haven't configured it). If you plan on doing any decent amount of tracing, you'll likely find it beneficial to constructor your own TraceableDoFn to handle this:

This will allow you a publicly accessible tracer instance within any usages of the TraceableDoFn, which will cover using in the next section.

As we discussed earlier in this post, we would be adopting an element-wise tracing context that could follow each individual message as it flowed through the pipeline:

As you might imagine, that can be a lot, so we can create some extension methods to handle simplifying this into two functions: one to initialize a trace and another to diverge an existing trace:

After you've established your tracer within your appropriate element-wise transform, you can use the trace() method to build and start your trace as seen below leveraging those extension methods:

Behind the scenes here, the following is happening:

Pipelines are seldom linear. Complex ones frequently branch, diverge and split off onto multiple paths, therefore tracing needs to support such operations and thankfully we can.

Let's consider you had a single event that was coming into your system and it had some notion of being traced. As we saw in the earlier example, we could easily do this via the trace() we showed off in the previous step:

This will establish your trace and expose it up to Jaeger, Google Operations (formerly StackDriver), or your preferred OpenTracing consumer. However, if during your pipeline, you wanted to trace other entities that branch off from your event (e.g. an event contains multiple user instances that we care about, so we want to initialize traces from those that follow from our event).

To accomplish this, you can use the follows() API to create a new trace that follows from an existing one. What this means is that you can have an element traced independently downstream, but ultimately it can still be linked back to the originating record that introduced it into the system:

After introducing this into your pipeline and running some data through, you can view the trace (covered in the next section) to visualize this branching within the trace:

What you can see in this chart is the following steps:

As you might imagine, an entirely separate Apache Beam pipeline could pick up one of these users, and apply an additional trace, which will ultimately appear on the overall graph for the originating event.

NOTE: This assumes that either have a production instance of Jaeger running or a local instance (perhaps inside of a Docker container) where you can send your traces.

Once you've updated your applications to configure a tracer, your elements to contain and support contextual tracing, and actually run them, you are ready to leave your application and take a look at the traces themselves in Jaeger.

After running your application, you should be able to visit your Jaeger instance, which provide a UI to visualize the traces themselves: 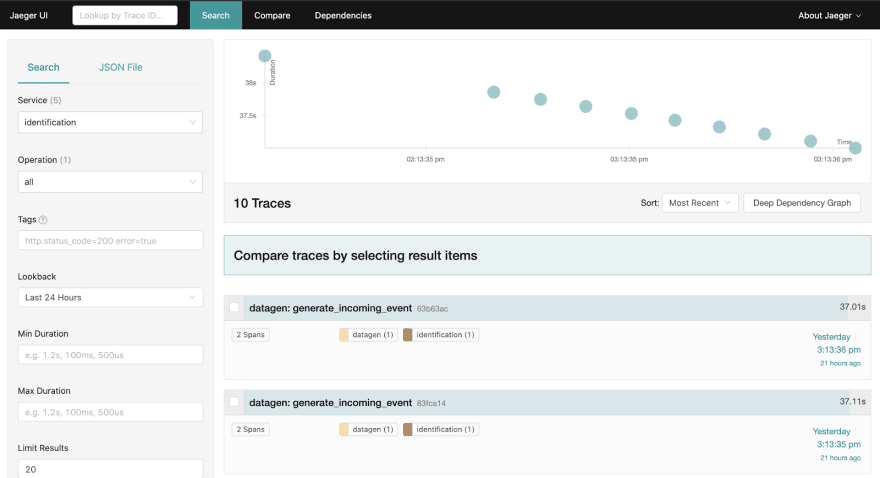 From the Jaeger UI, you can do quite a bit in terms of exploration. You get an overview of all of the applications that are currently performing traces and filter down by a specific application. You can also search all of the known spans for a given tag that was defined within your application (e.g. a search for error=true would display every span that contained an error, so you could easily find errors within your pipeline).

Additionally, you can drill into any given trace to see more information about it such as timings, individual tags, logging information and more: 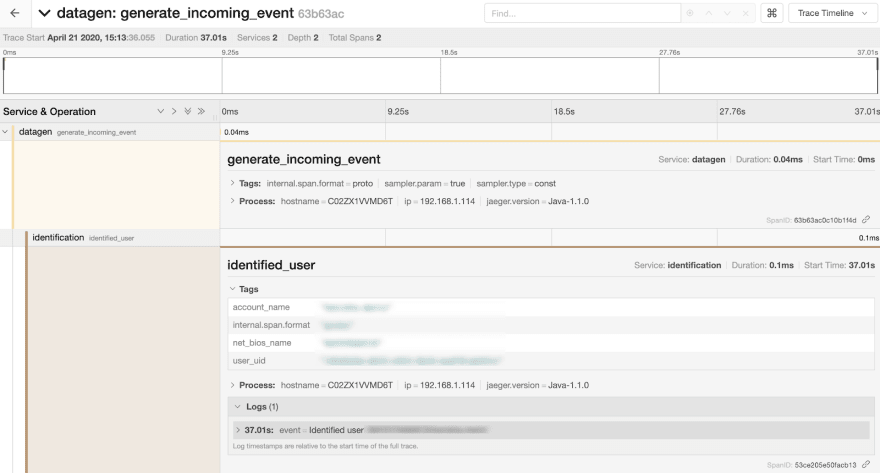 While this example is a very simple use case, you can imagine the value in more complex systems, especially during the development process, for logging aggregations in real-time, ensuring that transformations are being performed correctly, etc. The UI also provides a graphical representation of a trace as well:

You can also take two traces and compare them against each other to see where one might diverge (e.g. if one contained erroneous data it might be offloaded to a Kafka topic for manual review and another would continue on to its expected destination). As you might imagine, adding more traces, spans, and applications, this image would begin to expand into a complete graph of your entire system.

Obviously tracing and logging are their own massive topics that entire books have been dedicated to, so this is really just the tip of the iceberg. This post just covered the most simple of use cases for getting started with a tracing framework in a distributed system. There's a wide range of different frameworks, implementations, and strategies but this was just one of the options that was chosen.

Why you should switch to kotlin as an android developer