They’re the names we’re all used to hearing a lot about in the tech world: Amazon, Microsoft and Google, among others.

And it may come as no surprise that Amazon has been winning the battle with their AWS (Amazon Web Services) which they call “The leading cloud platform.”

But, is it still the leader in cloud services?

Azure closes the gap on AWS

According to Flexera 2022 State of the Cloud report, Microsoft Azure has not only closed the lead that AWS had for years, but Azure actually took the lead among many businesses. Google Cloud Platform lags behind both AWS and Azure by a good bit. 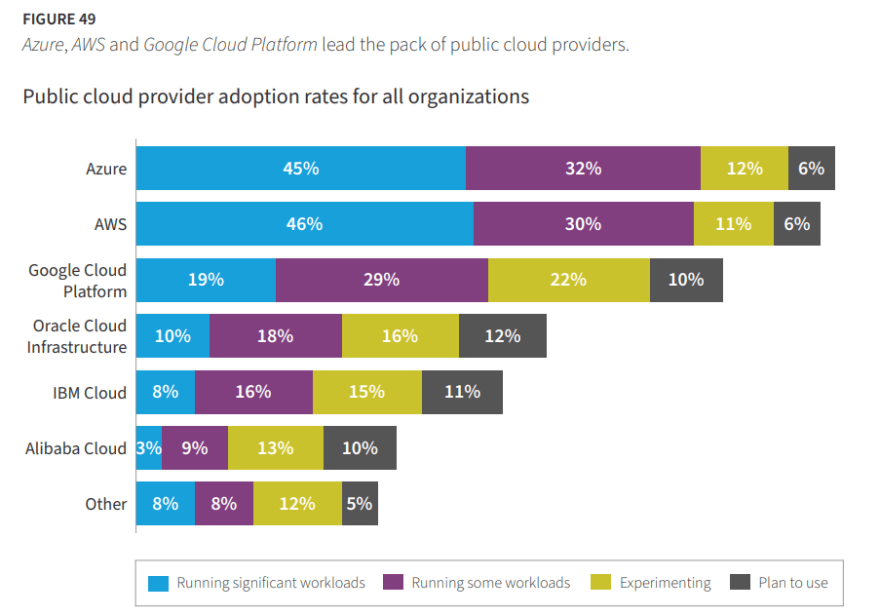 As we can see in the graph above, Azure is being used by 89% of companies polled and another 6% plan to use it. AWS is used by 87% of those same respondents, with another 6% planning to use the platform. In terms of “significant,” “some workloads” and “experimenting” both AWS and Azure had extremely similar percentages in all three categories.

Google is in third, with 70% using its cloud services, and another 10% planning to try it out. Oracle Cloud Infrastructure is in fourth, with 44% of companies in the study using it and so on.

How was Azure able to take the lead over AWS?

Over the last year, AWS’s usage has been mostly stagnant while Azure saw a 4% growth in adoption. 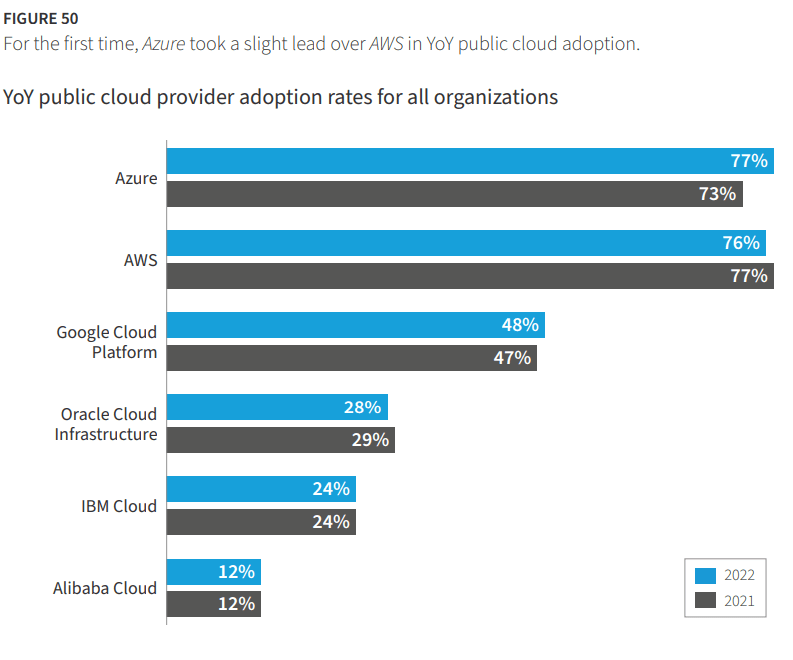 According to Tech Monitor, Dan Kirsch, the managing director of Techstrong Research explained AWS isn’t being used by enterprises as much as Azure.

"AWS is not getting the level of engagement with enterprise that Azure is," he told Tech Monitor in March of 2022. "You wouldn't say they're struggling, but it's not getting the level of engagement in the enterprise that Microsoft gets in highly regulated banks, the huge airlines, the huge insurance companies, and with its governmental cloud offering."

He added: "AWS is the DeFacto standard if you're a small or medium-sized business looking to get into cloud, but if you're a mature company, which already has Microsoft products in-house, there's a good chance you'll go Azure."

The data backed it up as Azure earned 95% of respondents’ answers for enterprise-level businesses while AWS earned 93%.

As far as small and medium-sized businesses are concerned, AWS leads there 89%-84%. And AWS is running more “significant workloads” (41%-31%) compared to Azure.

Interestingly, in the year over year change, AWS saw a 3% decrease while Azure saw an 11% increase by small and medium businesses, while Oracle Cloud Infrastructure grew by a strong 13%.

For the first time ever, Azure is more used than AWS in terms of cloud hosting. That’s a big deal!

Where Microsoft is seeing their gains is among the biggest, strongest enterprises who have likely enjoyed working with Microsoft for many years and trust them. But while Azure has pulled slightly into the lead, AWS is still right behind, as those two are clearly ahead of Google Cloud Services at this time.

When talking about small and medium businesses, there’s more parity in terms of which cloud is being used. So, it’s not completely a three-horse race, although the big guns are leading there, too.

What we offer at Fathym is wide-ranging. There’s IoT Ensemble, the data-collection and automation platform for the Internet of Things. Our Fathym Platform is a modular frontend development space for building websites and apps. And then we offer hosting of those websites using Microsoft Azure (soon with options for AWS, too!).

Fathym operates as a virtual cloud architect that automates best practice infrastructure and workflows in your Azure cloud.

Take advantage of our simplified developer experience while scaling to your own Azure cloud with full access to your infrastructure and the full range and power of Azure's extensive services. Build a future-proof tech stack from the get-go without the complexity.

Removing all vowels with JavaScript