This post is the second part of a series of posts concerning the basic concepts of Object-Oriented Programming. The first post has focused on Information Hiding. This time, I focus on the concept of Inheritance. Whereas most people think that it is easy to understand, the inheritance is a piece of knowledge that is very difficult to master correctly. It subtends a lot of other object-oriented programming principles that are not always directly related to it. Moreover, it is
directly related to one of the most potent forms of dependency between objects.

Out of there, many articles and posts rant against Object-Oriented Programming and its principles, just because they don't understand them. One of these posts is Goodbye, Object Oriented Programming, which treats inheritance and the others object-oriented principles with a very biased and naive eye.

So, let's get this party started, and let's demystify the inheritance in object-oriented programming once for all.

A good point where to start to analyze a concept is its definition.

Inheritance is a language feature that allows new objects to be defined from existing ones.

Given that we have a class for each object

an object's class defines how the object is implemented, i.e. the internal state and the implementation of its operations. [..] In contrast, an object's type only refers to its interface, i.e. the set of requests to which it can respond.

By now, we understood there are two types of inheritance: Class inheritance and interface inheritance (or subtyping). When you used the former, you're performing code reuse, that is you know a class as a piece of code you need, and you are extending from it to reuse that code, redefining all the stuff you don't need.

The problem with object-oriented languages is they’ve got all this implicit environment that they carry around with them. You wanted a banana but what you got was a gorilla holding the banana and the entire jungle.

It is normal that if two classes are linked through this type of relation, they must be used together. This fact is the problem of inheritance: Tight coupling.

Concerning our previous example, there is a problem of code reuse and a violation of the Single-Responsibility Principle. Each class is doing too much, and it is doing in the wrong way.

If you think about it, there is a big problem with class inheritance: It seems to break encapsulation. A subclass (a class that inherits from another) knows and can virtually access to the internal state of the base class. We are breaking encapsulation. So, we are violating the first principle of object-oriented programming, are not we?

Well, not properly. If a class you inherit from exposes some protected state, it is like that class is exposing two kinds of interfaces.

The problem is that maintaining two different interfaces of the same type is very hard. Adding more types of clients to a class means to add dependencies. The more dependencies, the higher the coupling. A high coupling means a higher probability of changes cascades among types.

So, don't use class inheritance. Stop.

If you can't use inheritance, why is this considered one of the essential principles of object-oriented programming? Technically, inheritance is still possible under certain circumstances.

The first case in which you are allowed to use inheritance is subtyping, or behavior inheritance, or interface inheritance.

The above sentence is very informative. It screams to the world that you must not override methods of superclasses if you want to reuse behavior.

Following this principle, the only types from which we can inherit are interfaces and abstract classes, avoiding to override any concrete method of the latter.

When inheritance is used carefully (some will say properly), all classes derived from an abstract class will share its interface. [..] Subclasses merely adds or overrides operations and does not hide the operations of the parent class.

Why is this principle so important? Because of polymorphism depends on it. In this way, clients remain unaware of the specific type of objects they use, reducing implementation dependencies drastically.

Program to an interface, not an implementation.

The only way we have to extend the behavior of a class is to use object composition. Obtain new functionalities by assembling objects to get more complex functionalities. Objects are composed using their well-defined interfaces solely.

This style of reuse is called black-box reuse. No internal details of objects are visible from the outside, producing the lowest possible dependency degree.

Object composition has another effect on system design. Favoring object composition over class inheritance helps you keep each class encapsulated and focused on one task, on a single responsibility.

Our initial example can be rewritten using two new highly specialized types: a Reader, and a Writer.

It seems that inheritance should not be used in any case. You must not inherit from a concrete class, only from abstract types. Is it correct? Well, there is a specific case, in which the inheritance from concrete classes is allowed.

The Liskov Substitution Principle (LSP) tells us exactly which is this case.

Functions that use pointers or references to base classes must be able to use objects of derived classes without knowing it.

When redefining a routine [in a derivative], you may only replace its precondition by a weaker one, and its postcondition by a stronger one.

The above is called design by contract. Respecting this principle avoids the redefinition of the extrinsic public behavior of a base class, that is the behavior the clients of a class depend upon. 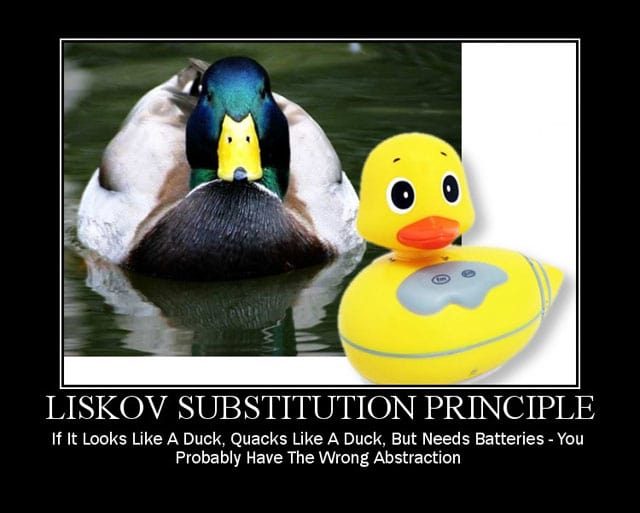 Why? The reason is that we have violated base class invariants. We tried to reuse code, and not to reuse behavior.

To sum up: try to avoid the reuse of code. Avoid class inheritance, if possible. Try to reuse behavior. Try to use subtyping. Prefer not to extend a concrete class. Alternatively, if you have to, verify that you fulfill the Liskov Substitution Principle.

If you follow these simple rules, the dependency degree between your classes will stay low, and your architecture will be simpler to maintain and evolve.

How to Get Better at Solving Programming Problems