Data Structures and Algorithms is such an essential unit in computer science and programming because it helps us understand the nature of a programming problem at a deeper level.
The name Data basically means a collection of Information, while structure would mean someplace holding in things.
So therefore data structure in technical terms translates to a named place that can be used for storing,organizing,manipulating data.
An Algorithm is simply a set of finite steps or instructions to solve a particular problem.
Let us take for example that our goal is bake a cake, the algorithm to it would probably look like:
Mix up dry ingredients
Mix up wet ingredients
Mix-up the dry and wet ingredients
Preheat oven
Put cake in the oven for 45 minutes at 400 degrees celsius
There are two main types of data structures. These include:
Primitive Data structures- They store data in one type.
Non-Primitive Data Structures-These store data of different types in a single unit.They are further divided into two categories:
LINEAR DATA STRUCTURES
These are those that are arranged in a line form. Meaning items come one after the other. Examples : Arrays,Queues,Stacks and Linked Lists
NON-LINEAR DATA STRUCTURES
For these items are not arranged sequentially rather they are arranged in a hierarchical manner using nodes. Each node may be connected to two or more items. They are majorly categorized into two types, that is trees and graphs. 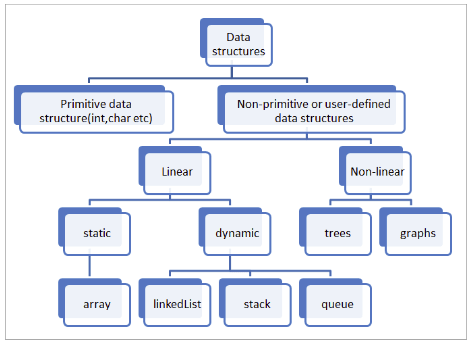 CHARACTERISTICS OF AN ALGORITHM

An algorithm’s performance is tested against two major metrics:
The amount it takes to run- Time complexity
The amount of space it uses up during its execution- space complexity
Guidelines of writing a good algorithm are:

Once suspended, rhonajoyke will not be able to comment or publish posts until their suspension is removed.

Once unsuspended, rhonajoyke will be able to comment and publish posts again.

Once unpublished, all posts by rhonajoyke will become hidden and only accessible to themselves.

If rhonajoyke is not suspended, they can still re-publish their posts from their dashboard.

Once unpublished, this post will become invisible to the public and only accessible to Rhonajoy.

Thanks for keeping DEV Community 👩‍💻👨‍💻 safe. Here is what you can do to flag rhonajoyke:

Unflagging rhonajoyke will restore default visibility to their posts.