Sometimes the technology that a term refers to evolves beyond the literal meaning of the term. This post is about just such a case.

As most of you know, SSG stands for static site generator. It's a term that has been around a long time. Back when I first got into using SSGs around 2013, it referred to tools like Jekyll, Middleman and Hugo, among others. While each had a different approach, they all essentially worked the same.

An SSG would take markup (usually a combination Markdown and HTML), a template (something like Liquid but there are many), data files (YAML, TOML, JSON) and perhaps things like Sass for CSS and CoffeeScript (gasp! but it was 2013) for JavaScript. It would run a build step and produce static HTML, CSS and JavaScript. Here's a diagram I used to use to illustrate what an SSG did. 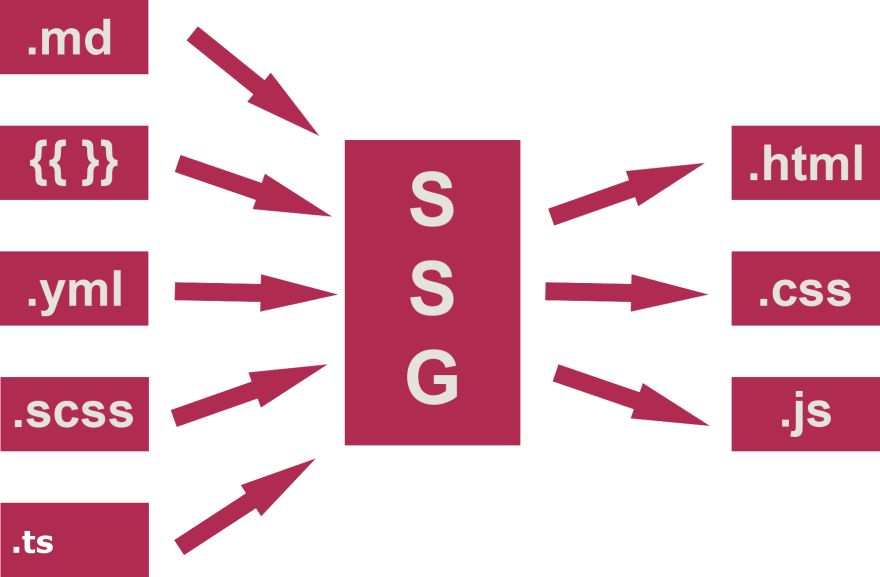 The Times They Are A-Changin'

That definition of an SSG stood for many years until about 2019 with the introduction of Next.js 9. Prior to Next 9, Next.js did support static export, but it was an all or nothing affair, meaning that you had to choose to build your site entirely as server-side rendered or entirely as static. This already stretched the definition of a static site generator, but, to be fair, Next.js never called itself that and started its existence as SSR-only.

Next 9 introduced "automatic static optimization" whereby a page could be statically rendered if Next.js determined the page did not have blocking data requirements within getInitialProps. Later versions introduced new methods like getStaticProps and getServerSideProps to allow developers to specify if a page should be server rendered or statically generated.

For quite some time Next.js was alone in this innovation. Many of us lumped Next.js into the SSG category because it shared many capabilities of SSGs and likely also because you could ultimately deloy it to many of the same services that you'd deploy your SSG-based site.

A Change Would Do You Good

The success of Next.js and the demands of developers spurred other tools within the loose SSG umbrella to adopt a similar "not just static" set of rendering options. Here are a few significant examples:

As you can see, the ground shifted quite a bit in the past year alone. It was one thing to lump a tool like Next.js into the SSG umbrella as an outlier (yes, Nuxt did previously support an all-or-nothing SSR/static generation option too), but now tools that were traditionally pure SSGs like Gatsby and Eleventy suddenly allowed non-static routes.

Don't You Forget About Me

There still exists a still popular set of tools that stay true to the SSG definition like Hugo and Jekyll, but it's clear that most of the tools are moving on from purely static output.

Is it fair to lump a tool that supports SSR and even perhaps other types of rendering in with tools that export purely static output under the umbrella of static site generators? Probably not.

Has anyone come up with a better term? I don't think so. At least, not yet anyway.

So we keep using the SSG name even if it's a misnomer. At some point, though, we'll have to reckon with a very ill-fitting name for these tools, because naming is important in the end. A misleadingly named set of tools can lead to confusion which hurts adoption, muddles the message and leaves an opening for folks who, for whatever reason, don't like these particular tools.

Photo by Joakim Honkasalo on Unsplash

VS Code Tip of the Week: The Thunder Client Extension

Brian Rinaldi
Brian Rinaldi is a Developer Experience Engineer at LaunchDarkly. He's spent over 20 years as a web developer and his current passions are the Jamstack and GraphQL.
What is the Jamstack in 2022?
#javascript #webdev #jamstack
What's So Great About Next.js?
#webdev #javascript #jamstack
Turning a REST API into GraphQL Using StepZen
#graphql #webdev

Once suspended, remotesynth will not be able to comment or publish posts until their suspension is removed.

Once unsuspended, remotesynth will be able to comment and publish posts again.

Once unpublished, all posts by remotesynth will become hidden and only accessible to themselves.

If remotesynth is not suspended, they can still re-publish their posts from their dashboard.