ChatGPT has been taking the world by storm this past week. I've experimented with using it for everything from re-wording and simplifying long blog posts to crafting shorter mastodon posts (follow me at indieweb.social/@thomasreggi). It's been a great help in making my text more coherent and easy to understand. I've also, like many programmers, used it to generate code snippets and even answer some coding questions.

Next, I tried using ChatGPT on stack overflow, pasting some of my questions directly into the chat to see if it could provide any useful answers. While it did provide some correct answers, it also produced some incorrect or non-functioning code, which wasn't immediately apparent until I tried running it.

As an example, I asked ChatGPT the question "Node path relative same directory missing './' prefix" and while I was checking the output, I received a similar answer from a user on stack overflow. The summary and code snippet of the answers are different, but the answers themselves are the same.

Could this all be just a coincidence? It's hard to say for sure. There has been a lot of talk about using software to detect generated text, but we may not be there yet. Today, StackOverflow announced that it will be banning answers generated by ChatGPT: Temporary policy: ChatGPT is banned.

According to StackOverflow, the main issue with ChatGPT is that although its answers have a high rate of being incorrect, they often appear to be correct and are very easy to produce. This makes it difficult for users to determine which answers are reliable and which are not.

Here are the two answers side by side: 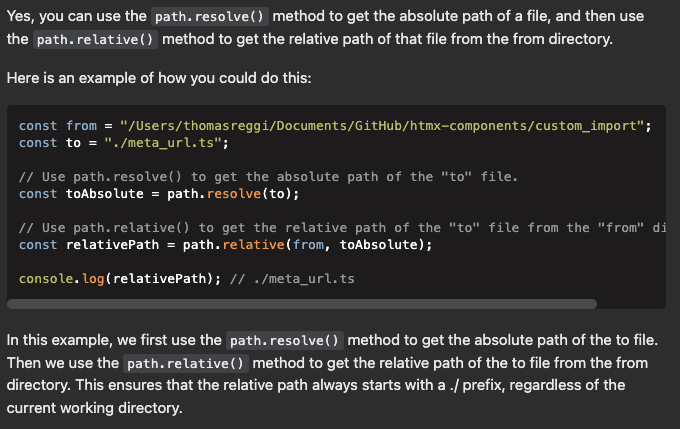 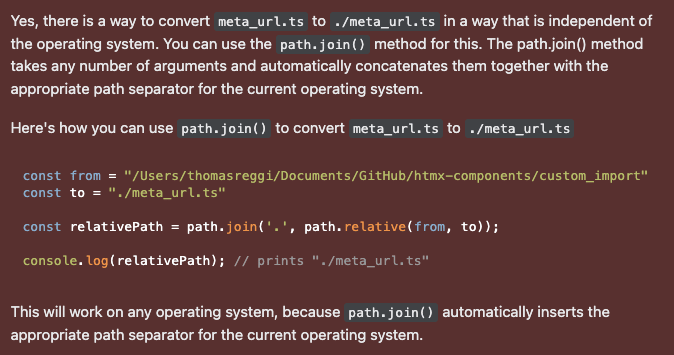 The post has since been deleted, and the user has been banned. I'm curious if this is because they had started to spam more and more of these incorrect answers throughout the site.

What do you think about ChatGPT? Has it helped you learn anything new, such as fears, dreams, hopes, or goals? Comment below!

Prospect of ChatGPT in Test Automation

Why you shouldn't rely on ChatGPT so much!

Thomas Reggi
TypeScript developer ♻️
Series vs. single: which type of technical article do you prefer?
#discuss #meta #writing #community
Tips to be a Healthy Developer🧑‍💻
#beginners #programming #discuss #javascript
What was your win this week?
#discuss #weeklyretro

Once suspended, reggi will not be able to comment or publish posts until their suspension is removed.

Once unsuspended, reggi will be able to comment and publish posts again.

Once unpublished, all posts by reggi will become hidden and only accessible to themselves.

If reggi is not suspended, they can still re-publish their posts from their dashboard.

Once unpublished, this post will become invisible to the public and only accessible to Thomas Reggi.

Thanks for keeping DEV Community 👩‍💻👨‍💻 safe. Here is what you can do to flag reggi:

Unflagging reggi will restore default visibility to their posts.