I enrolled in Google Summer of Code this year with Inkscape as my mentor organization. I proposed to implement the Command palette and the Macros (more on that later).

The 'Command Palette' feature is finally merged in Inkscape's master branch, it has still a long way to go, but now you can easily contribute and try it out. It is currently available in version 1.1-alpha, and it may even land in version 1.1.
So what even is command palette?

If I had to summarize it in a sentence

The Command Palette is an Access Point with a text interface.

You can do things by typing.

What does it do? Search and/or Execute.

Actions are the backbone of everything you do in Inkscape.

Don't try to be an oracle, tell me what it can do now!

Well, that's it for now, more features will be added in the future.

To open the Command Palette, press ?. You are greeted with a beautiful (not really) dialog. 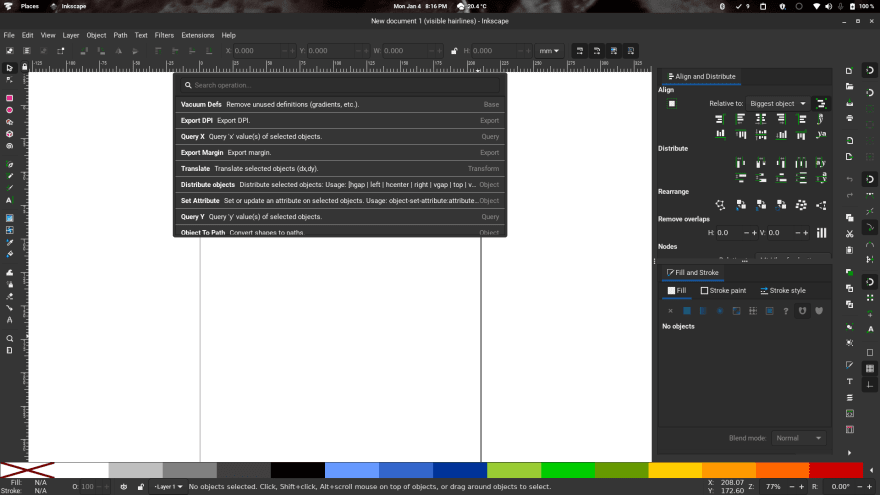 If you can't stand this beauty (not really), you can close it by

Scroll through the operations available when you open the command palette.

Some operations are missing

The command palette remembers the last commands you performed. To access them press the up key when Command Palette is in focus.
Press the down key when on the most recent command to go back from history mode to search mode.

Many actions that you use take input or parameter, for example, rotate action takes angle, transform action takes distances to move an object by, in x and y directions.
Parameters of actions are also remembered (doesn't work in 1.1-alpha), so when you're asked degrees for rotate, you can just press the up key until you find the previously used value you wanted.

...and many more. It's still a new feature, written by a kid during summer, so there's a lot of room for improvement.

Can you get the loop? — Codewars C++ Solution