Because the day in the life of a developer doesn’t involve just writing code and solving problems. They’re expected to keep everyone updated on their progress. Share knowledge. Collaborate with their teammates — technical and non-technical. Handoff work. Do code reviews.

In my exploration on the topic of developer productivity, I came across two camps:

To be fair, both camps have some rather compelling points. You can’t completely stop tracking progress. And at the same time, you can’t constantly pester your teammate to share updates.

So, what do you do? How do you improve a developer’s productivity and ship great software together?

1. Work happens in Git. Why not let it do the grunt work?

According to Stack Overflow’s 2018 survey of developers, 87% of developers use git around the world. Being one among them, having the ability to integrate git with your PM tool must be incredibly useful in getting work done and tracking its progress.

But not many tools support such deep integration with GitHub, GitLab, and Bitbucket as Zepel does.

When you’ve integrated Zepel with GitHub, GitLab, or Bitbucket, there are a bunch of things you can do:

Because let’s be honest, sometimes developers begin working on a fix even before it can be logged in your PM tool. To interrupt and ask them to link to an item just so you can track their progress isn’t ideal. So why not just log it automatically?

2. If you don’t automate the mundane tasks, you’re doing a disservice to your development team

A developer’s time is expensive. Surely you’d prefer if they spent it solving problems and building software.

So what boring tasks can you take off their plate? Updating statuses, sharing progress, and letting you know that they’re waiting for you to have a look at the PR, of course.

Once you’ve connected your Zepel account with git (GitHub, GitLab, or Bitbucket), you can set up git workflow automation and make automatic status updates. Any item can be moved automatically from one status to another. 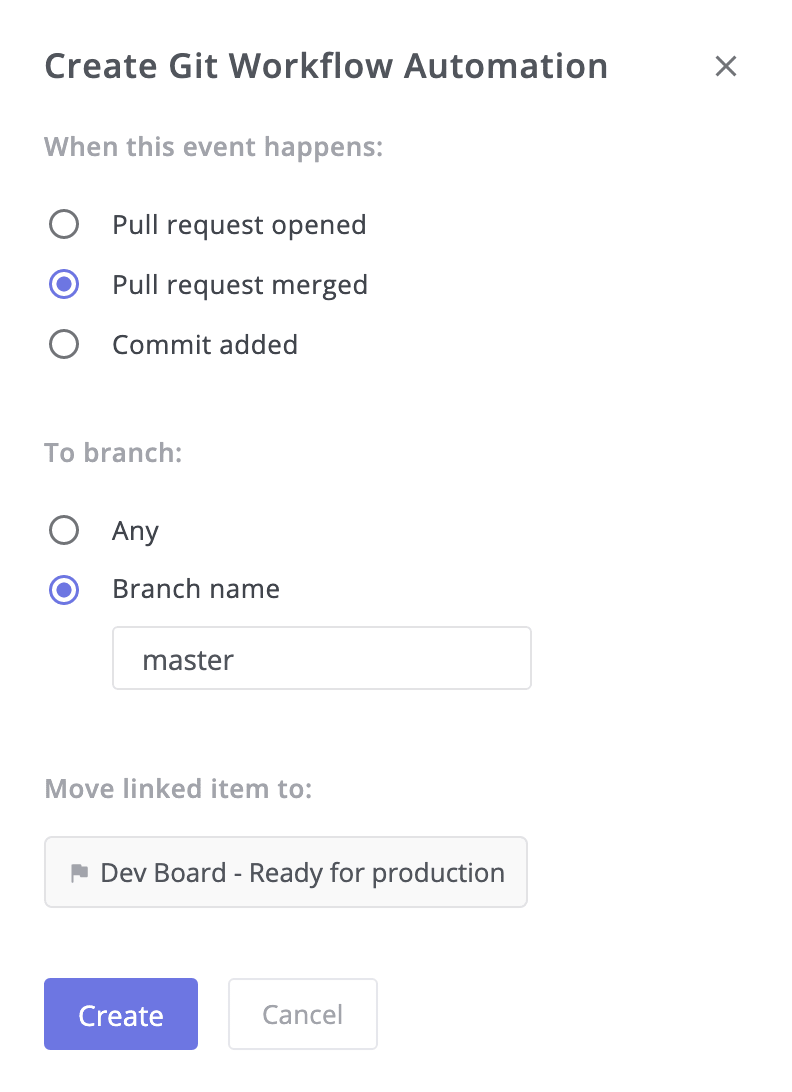 You can set up triggers and appropriate actions to be carried out when those set of events occur. Some examples are shown in the image below. 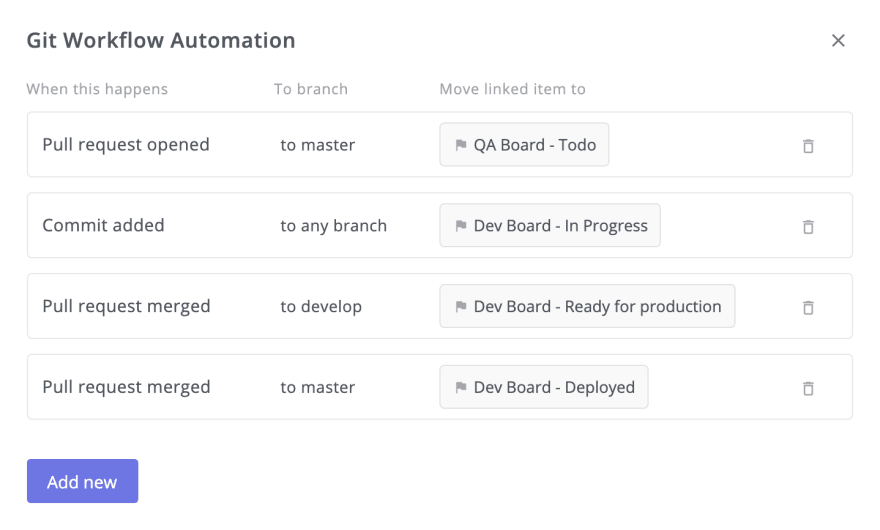 Of course, you don’t want to go overboard and automate every part of your development process. But when you automate key areas that are also considered by your developers as mundane, you aren’t just saving developers time and energy. You’re making sure they get to do what they love doing the most — building products and software.

Psst… Here are 5 git workflow strategies that you can use for inspiration.

System notifications are probably the biggest culprits when it comes to a drop in productivity. But when you turn them off, you’re going to leave your teammates in the dark about your progress.

Get control over what notifications you want (and don’t want) to send by connecting your Zepel account to your Slack channel. 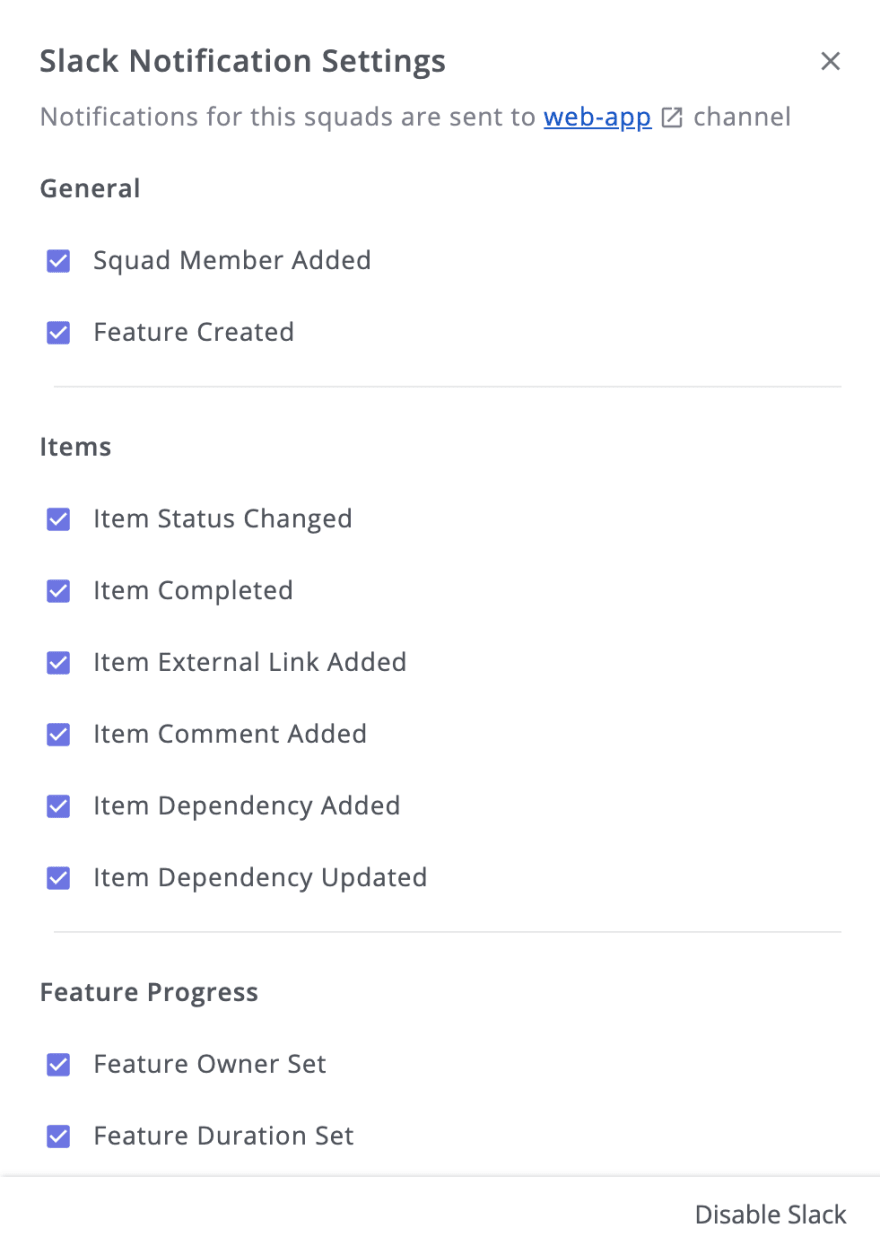 And if you’ve got the Git Workflow Automation already set up, you now have one powerful automation in place that connects Zepel + Git + Slack. Since it’s all automated and under your control, it allows developers to stay focussed and managers to plan the next steps.

4. Don’t leave developers in the dark. Especially when it comes to customer feedback/requests

For all the talk of agile and scrum and getting constant feedback, there’s actually very little information that your developers get about what your customers are saying about the feature you just built.

This becomes all the more painful when you have multiple customers making several requests across multiple tools — help desks, live chat, error tracking tools, and more.

Streams in Zepel helps you bridge this gap. You can gather requests from popular tools such as Canny, Intercom, Zendesk, Sentry, and more with a few clicks. You can then prioritize these requests and delegate them to your Squad as a feature, user story, enhancement, or bug to be worked on. 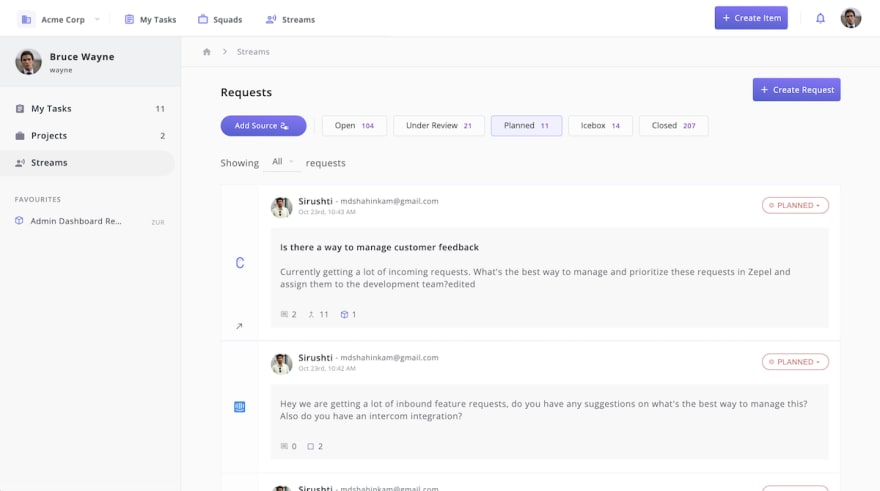 With Streams, your team won’t be cranking out software and features. They’ll be shipping customer-focussed software.

5. Your devs have great ideas too!

Between all the emojis and memes and “Can you hear me?”, there’s a wealth of ideas that your teammates have that can help you build better products.

These pop-up between conversations and “By the way, my friend said this about our product”.

How do you capture them?

You can use Slack as a source for Streams in Zepel to collect all these ideas with just two clicks.

Once they’re captured inside Streams in Zepel, you can group them with other similar requests, prioritize them, and hand them over to your development team for execution.

P.S. You can send any team member's Slack message as a request, not just yours.

Everybody has a way of working. Some prefer to organize their work by deadlines. Some by Sprints. And some like to wing it. (It’s not productive. Trust me.)

However you like to view your work, you can do it with My Tasks in Zepel. 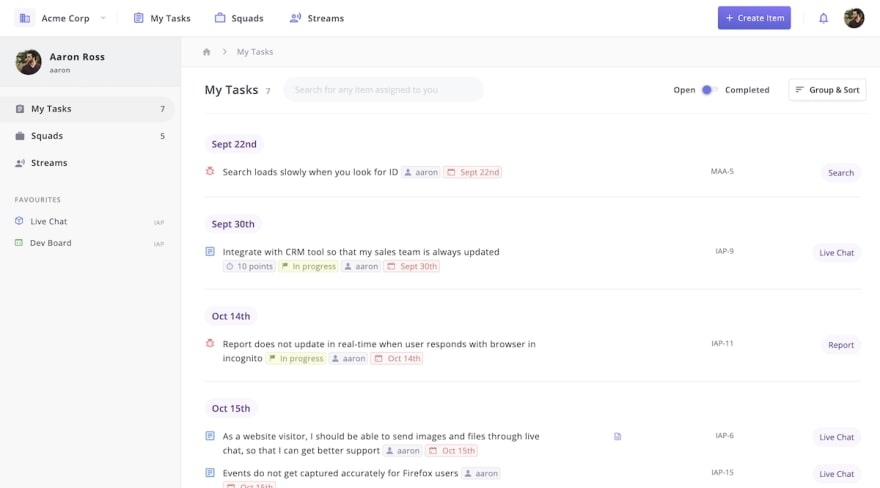 And with quick access to the ID, you can effortlessly link the task assigned to you to a branch, commit, or a PR.

7. Communicate changes with images. After all, an image screams a thousand words.

One of the crucial aspects of product development involves design. How do you communicate minute design changes? Or a front-end bug?

Zepel Capture lets you capture images, edit them, share them with your team as screenshots, and even add them as an attachment to a new item in Zepel. 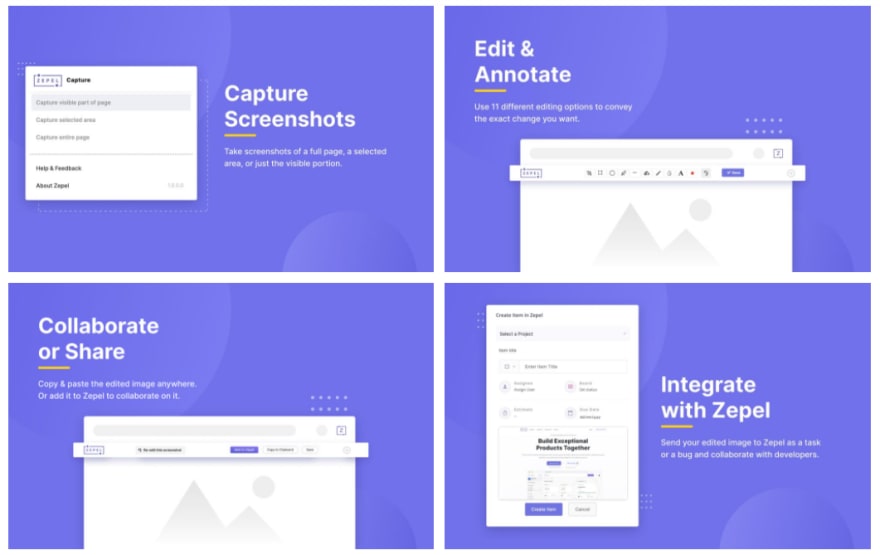 You needn’t leave your current workflow and switch to any other tool - take screenshots, edit them, and then share these with the team or attach it to an item/feature.

Impressed? Head to your Zepel account right away and tweak it to meet your needs. And if you’ve got any queries reach out to us; we’re always happy to help.

Be effective with Bitrise CI for Android — the lessons I learned the hard way.

How to Optimize Your Code for Performance

Once suspended, ranjalir will not be able to comment or publish posts until their suspension is removed.

Once unsuspended, ranjalir will be able to comment and publish posts again.

Once unpublished, all posts by ranjalir will become hidden and only accessible to themselves.

If ranjalir is not suspended, they can still re-publish their posts from their dashboard.

Once unpublished, this post will become invisible to the public and only accessible to Ranjali Roy.

Thanks for keeping DEV Community 👩‍💻👨‍💻 safe. Here is what you can do to flag ranjalir:

Unflagging ranjalir will restore default visibility to their posts.