All organizations want to protect their systems and have a good strategy in order to stay away from malware or other potential threats. Before introducing files and binaries into your system organization is very important to scan them and respond immediately based on a predefined strategy.

Fission is an open-source and Kubernetes-native serverless framework that lets developers to run code functions easily. Kubernetes has powerful orchestration capabilities to manage and schedule containers while Fission takes advantage of them, being flexible. In other words, Fission can focus on developing the function-as-a-service (FaaS) features. Fission supports many programming languages such as Pyhton, NodeJs, PHP, Go and C#. Also, this tool allows you to create a message queue trigger like Apache Kafka, AWS SQS, AWS Kinesis, GCP Pub Sub, Nats Streaming. In this way, the product becomes an open-source version of AWS Lambda.

Fission has three core concepts: Function, Environment , and Trigger. Their relationships are presented in the following figure:

This walkthrough will show you how to build a pipeline in order to scan your MiniIO files using asynchronous triggers. When a new file will be pushed in our MinIO buckets (1)a new notification will be send to the Kafka (2) and the trigger will start the function (3), scanning the file for viruses (4). 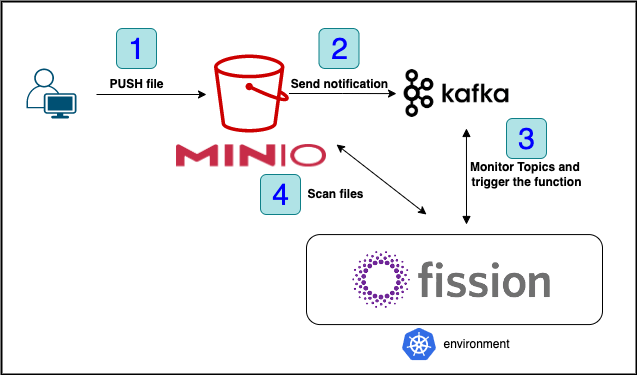 For this walkthrough, you should have the following prerequisites:

In order to implement what was described you have to follow the steps:

Use the mc event add command to add a new bucket notification (when you put new objects) with the configured Kafka service as a target:

Here I’ve created a Python code which is available in Github.You have to change MinIO credentials in order to connect to it. Your objects will be copied inside the container and scanned using clamdscan from ClamAV. If the file is infected will be moved to “/tmp/infected-files/” and placed in a special bucket (infected-objects) for deep investigations.

In a default scenario Fission use image based on language environments (in our case Python), but you can create your own image using Dockerfile. After that, you can upload new image in your Docker registry and when you create a new environment you will mention your custom image and secret if it’s necessary. Our custom image install ClamAV and what is necessary for scanning files.

Now, let’s create a function with Python as environment:

Let’s assumed that Python code is saved in minio-scan.py file. Using this file you have to create your Fission function like so:

Replace ENDPOINT:PORT with a comma separated list of Kafka brokers.

Step 4 - Check the logs and Fission behaviour
Your function will be deployed as a pod in fission-function namespace into Kuberentes cluster. Using kubectl logs -f -c python $POD_NAME you can check the logs in real time to see what happens there. Also you have to take a look at Kafka topics (response or error) in order to know the output of your function.

Fission is a versatile framework that can be used with many different programming languages and help us to build FaaS in Kubernetes. In this scenario, I used some basic feature of Fission for scanning new S3 object but I totally recommend you to read more regarding Fission technologies on Fission blog which are very interesting.

Avent of Code - Day 01 - Find the Largest Sum of Groups

The most common email validation problems

Andrei Fer
I gain the most satisfaction at work when I am challenged. On a daily basis I work as system administrator.
What Makes You Stay In A Community?
#discuss #community #watercooler
Meme Monday 😬
#jokes #discuss #watercooler
7 Developer Portfolio for inspiration
#webdev #motivation #career #css

Once suspended, raklev20 will not be able to comment or publish posts until their suspension is removed.

Once unsuspended, raklev20 will be able to comment and publish posts again.

Once unpublished, all posts by raklev20 will become hidden and only accessible to themselves.

If raklev20 is not suspended, they can still re-publish their posts from their dashboard.

Once unpublished, this post will become invisible to the public and only accessible to Andrei Fer.

Thanks for keeping DEV Community 👩‍💻👨‍💻 safe. Here is what you can do to flag raklev20:

Unflagging raklev20 will restore default visibility to their posts.