Why to Learn Data Structures and Algorithms?

Data structures and algorithms (DSA) goes through solutions to standard problems in detail and gives you an insight into how efficient it is to use each one of them. It also teaches you the science of evaluating the efficiency of an algorithm. This enables you to choose the best of various choices.

An algorithm to find largest of two numbers:

This is how a algorithm looks like. It is independent of Programming languages. It is just a step-by-step solution to given a problem which could be understood by everyone.

Data Structures are the programmatic way of storing data so that data can be used efficiently. Almost every enterprise application uses various types of data structures in one or the other way.
Data structure is a storage that is used to store and organize data. It is a way of arranging data on a computer so that it can be accessed and updated efficiently.
Depending upon the requirement, we can select a particular data structure.

For example, if you want to store data sequentially in the memory, then you can go for Array data structure

A linear data structure has data elements connected to each other so that elements are arranged in a sequential manner and each element is connected to the element in front of it and behind it. This way, the structure can be traversed in a single run.

Linear data structures can be implemented easily as computer memory is also arranged in a linear manner.

One of the simplest data structures, an array is a collection of items that are stored sequentially. An array contains values or variables—known as “elements”—of the same data type and is of a fixed size, so you cannot change the size of an array. Each item in an array is indexed starting with 0.

Arrays are commonly used as structures for building other, more complicated data structures. They are also used for sorting algorithms.

A linked list stores a collection of items in a linear order. Each element, or node, in a linked list contains a data item, as well as a reference, or link, to the next item in the list. In Other words, Data elements are connected through a series of nodes and, each node contains the data items and address to the next node.

Linked lists are used for symbol table management in switching between programs using Alt + Tab (On a PC).
Multiplayer games use a circular list to swap between players in a loop.

A stack stores a collection of items in the linear order that operations are applied. This order could be last in, first out (LIFO) or first in, Last out (FILO). That is, the last element stored in a stack will be removed first. It works just like a pile of plates where the last plate kept on the pile will be removed first. 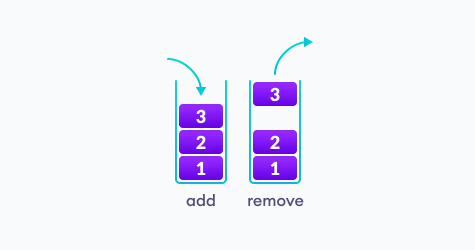 Stacks can be used for Memory Management.
Stack data structures are used in backtracking problems.

A queue functions similarly to a stack, but instead of being a LIFO structure, it is a FIFO (First In First Out) structure. The easiest way to think about a queue is to think of a line of people waiting to enter a building. The person at the beginning of the line will enter the building first, while the person at the end will enter last. 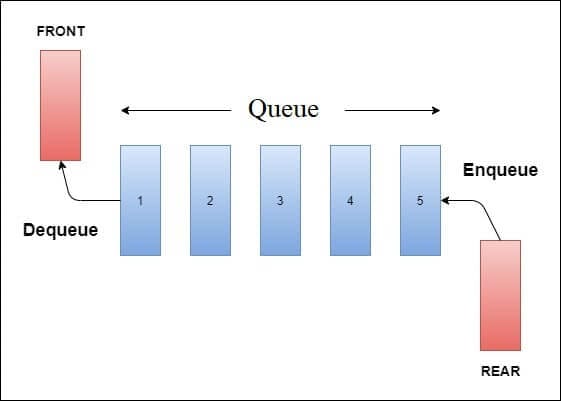 In real life scenario, Call Center phone systems uses Queues to hold people calling them in an order, until a service representative is free.

The diagrammatic representation of a graph data structure looks like:

Google maps uses graphs for building transportation systems, thus their navigation system is based on the algorithm to calculate the shortest path between two vertices.
Facebook’s Friend suggestion algorithm uses graph theory. Facebook is an example of undirected graph.

Similar to a graph, a tree is also a collection of vertices and edges. However, in tree data structure, there can only be one edge between two vertices. Each node is associated with a key value, with parent nodes linked to child nodes or sub nodes. There is one root node that is the ancestor of all the nodes in the tree. 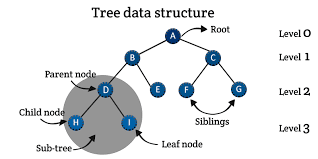 A hash table also known as a hash map stores a collection of items in an associative array that plots keys to values. A hash table uses a hash function to convert an index into an array of buckets that contain the desired data item.

A heap is a tree-based structure in which each parent node's associated key value is greater than or equal to the key values of any of its children's key values.

A Trie is an advanced data structure that is sometimes also known as prefix tree or digital tree. It is a tree that stores the data in an ordered and efficient way. We generally use trie's to store strings.

Knowledge about data structures help you understand the working of each data structure. This helps you write memory and time efficient code.

This is my first post. Please let me know your valuable feedbacks.

Fix Firefox's 'Show in Folder' not opening in File Manager

How to become a Fullstack Mobile Developper in a month.

Kousik Raj
love to learn more and more about the new technologies of this new world.
The Top 10 Algorithms Every Programmer Should Know In Graph Data Structure!
#algorithms #cpp #programming #beginners

Once suspended, rajkousik will not be able to comment or publish posts until their suspension is removed.

Once unsuspended, rajkousik will be able to comment and publish posts again.

Once unpublished, all posts by rajkousik will become hidden and only accessible to themselves.

If rajkousik is not suspended, they can still re-publish their posts from their dashboard.