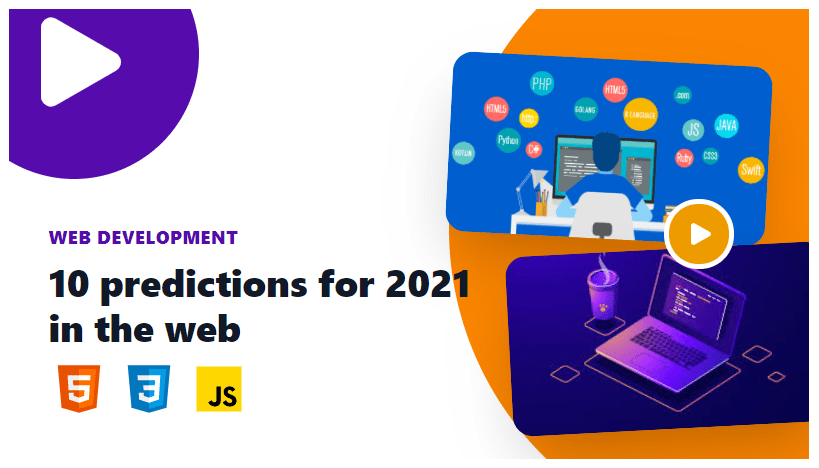 Hey everyone welcome to another new blog, my name is Vikas Rai and today in this article, I am going to tell you my 10 predictions for 2021 in the web development world.

So, let’s get started:

Number one I believe that this year will see a massive increase in es build and the toolkit it brings with itself like other tools like White and Snowpack which use ES build internally.

This is because es build literally puts other tools like webpack to a shame when you benchmark them or speed test them it's not a two times it's not a five times it's not a ten times it's a hundred times faster than Webpack now that's something to consider when both tools do the same job.

In many people uses snowpack on cooldown playgrounds as well it’s not a regular Webpack because that's just too slow for booting up a playground but anyway this is my first prediction, I believe and I hope that more development ecosystem at least in development makes use of Esbuild because that speeds up your deployment time by a hundred times.

going to land in the react, because concurrent mode is a highly polarized

sort of thing where some people are extremely unhappy for landing it and some people just think that it will break the web.

Recently Wasm has ported ffmpeg binary from the native binary do awesome which enables you to actually run ffmpeg in the browser itself but the point being wasn't is going to be impactful for the web.

In the next three to five years and in 2021 is going to add huge amount of fuel to see growth in web development.

Number four is typescript , which will keep on gaining popularity and you have to get on with it that TypeScript is the obvious next step

you know serious stuff serious business then it is of no brainer to go ahead and use .

a production server so yeah typescript has done a massive

jump in the Github use in the year 2020 and I only believe that this is going up in 2021 as well not so much popular with JavaScript.

definitely going up spots in all sorts of ranking this year as well as in the coming years as well.

5. Rise of React Query and useSWR

and not care at all about those stores and maintaining a central state and all that stuff.

really simplifies your model of your application.

So I highly believe that libraries like react query and the mention I have just mentioned and useSWR are going to see a massive increase in use as developers become aware about them.

This is going to be replaced by you know the standard fetch and use effect practices which we usually do when you're starting to learn react and this is a huge benefit both in terms of front-end developing and back-end development in terms of resources in terms of user experience and basically whatever you can think , this is actually the right step.

Number six is going to be a fall of redux for me why because well let's face it most applications are a bigger chunk of applications which uses Redux to maintain central state right so that is point number one to keep in mind.

The point number two is out of that bigger chunk of applications I don't have the exact figures but I am assuming a lot of applications use redux to maintain network level state that means you get something from the server you store it in a redux store that is used by multiple components whether it's your header whether it's your content and that allows you to you know not bug this over again and again that is a use case which is solved already by number six five by react query useSWR and similar elements.

going to put an impact to Redux.

amount of downloads of the use because of number five which i mentioned above.

server side generation and rendering frameworks like Next.js on Nuxt.js

Why because developers are also realizing even companies are realizing

If you have less code to execute you have much more performant web pages so that is going to see a huge jump actually it's just going to continue because 2020 has been i guess the year for Next.js

but yeah this is going to continue even more in 2021.

like Vercel for example Vercel deploys your Next.js score and you know all your serverless functions on lambda so that is a serverless

technology so these technologies and platforms will help you as

developer to focus much more on the coding aspects

the infrastructure which is pretty cool.

Number nine is something that I sincerely believe that AI or gpt-3 and all that stuff is not going to take over the web why because people still do not know what they want to build you know tools like gpt-3 and all these AI stuff are going to need exact representation of what you want but most of the times when you're dealing with those boring clients they just want revisions again and again.

But trust me you at least have five to seven to ten years of you know easy front-end jobs and gigs still with you so there's that you aremore likely to be you know thrown out of shop by Figma or you know all these all these automatic website building tools.

The gpt-3 presentation where you just write text and the code spits out so be careful of Figma you know Shopify , WordPress and these stuff which people use instead of like AI and you know wandering and discussing about AI is taking over the code and web and that stuff.

These are not my opinions by the way , these prediction is made by @mehul Mohan (Co-Founder Codedamn.com ) on his YouTube channel “codedamn” and also it’s also a platform for learning Web-development with mentorship, hands-on practice and courses.

I just have taken those words and shape them into this article because it was so much informative and interesting , that I cant resist myself to write this article.

The codedamn Platform offers both free and paid Courses . I personally used only the free version because it provides most of the thing which I wanted.

But with paid membership you get access to all the resources , mentorship and everything the platforms offers.

Actually I have not yet mentioned the Tenth prediction , so yeah that’s is my own prediction

Number ten is this platform which I came across in December 2020 when I was searching for Next.js tutorial and from there I reached his YouTube Channel “codedamn” and from there I came to know about codedam.com.

In case you are interested to know about codedamn the you can visit by click on the below link:

So yeah guys that was my 10 Predictions for 2021 what do you think are these right are these wrongs would you like to add something to the predictions or in general if you like reading the article please leave a comment below and let me know what you think .

I hope you enjoyed reading this article and if you have read till here then thank you so much for your patience reading.

Once suspended, raivikas will not be able to comment or publish posts until their suspension is removed.

Once unsuspended, raivikas will be able to comment and publish posts again.

Once unpublished, all posts by raivikas will become hidden and only accessible to themselves.

If raivikas is not suspended, they can still re-publish their posts from their dashboard.