Ansible is an IT automation tool which can deploy software , configure systems and orchestrate more advance tasks .
Ansible is completely agentless means it connects through ssh and after connection ansible pushes codes called as modules and it runs on your nodes once finished it automatically got removes . 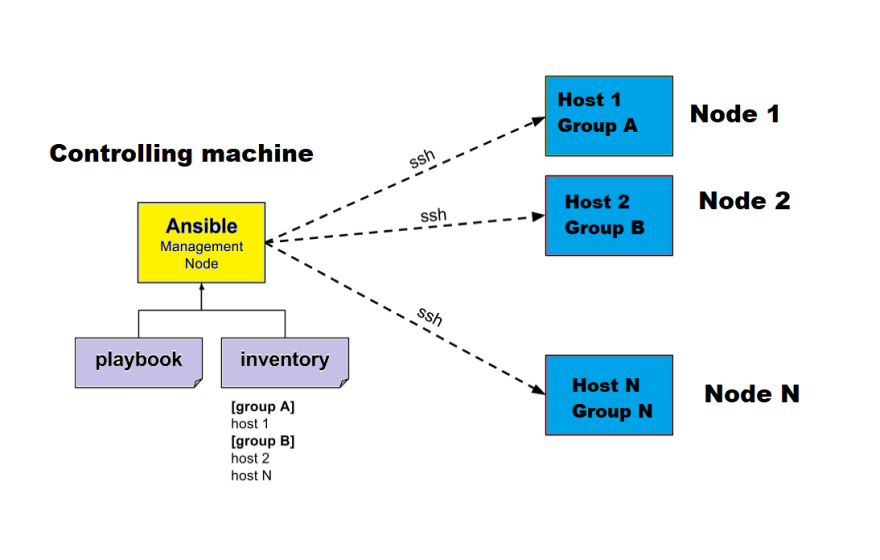 By connecting the node and pushing programs called modules .
Management node (running the installation) does a ssh .
Then it look for the host inventory and then remove the code which is already executed .

Push based vs pull based :

What this agent does is that it keeps on pulling the central server periodically for any kind of confirmation information and it's pulls those changes and gets them affected on their node machines .

So in case of ansible you can make changes directly and push the configs as you got the full control .

Disadvantages with the push based architecture :

You can not achieve full automation with this because it is not usually possible to boot a server and have it configured without some client server protocol and also it gives you some lag when you pass it's limit's(like configuring 1000 servers) unless you use threading and multiprocessing .

Inventory defines a group of hosts . we can group our web servers in one group and application servers in another . group can have multiple or single servers .

Modules are the executable plugins that get the real job done .
Modules can take the key value pair .

scp -i 'location of your pem file' 'file that you want to copy' ubuntu@'ip':/home/ubuntu

Create Proxmox cloud-init templates for use with Packer