If your team is developing or updating an API as part of your software project, you need to be careful about making changes to that API. Those changes could cause unexpected bugs or failures and leave an unpleasant surprise for team members unaware of the changes. A lack of communication or coordination can turn even small issues into bigger ones for your organization.

What API Changes Cause Problems?

The following are some examples of API changes that could cause bugs in your software.

Changing the Response Object of an Endpoint 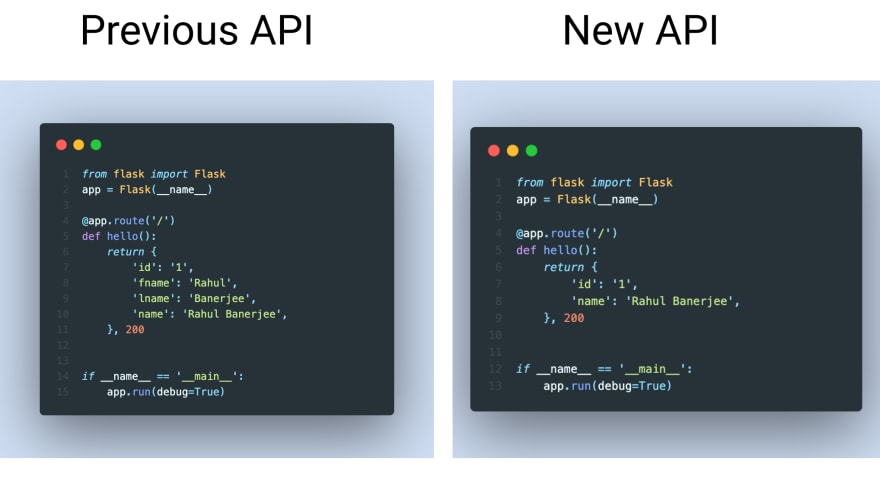 Assume you have a simple Flask API. On the left is your original API with a single endpoint, which returns information like ID, first name, last name, and full name. You decide that first name and last name are redundant since they can be derived from the full name using a simple split operation; on the right is the same endpoint with the updated response object.

If one of your team members consumes your API as shown in the code snippet below, the change to your API would break their code:

This sort of bug could also occur if you update the names or data types of some of the fields in your response object.

Changing the Name or Structure of an Endpoint 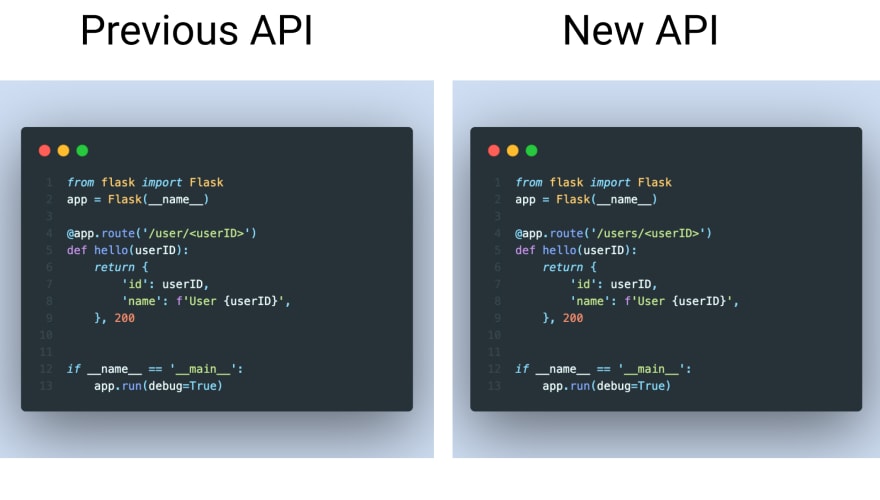 The two code snippets above differ by only a single letter. On the left, the endpoint uses user, while on the right it uses users.

If a team member consumes the API as shown below, the update would break their code, because the request would be made to a nonexistent URL:

Updating the Response Code of an Endpoint 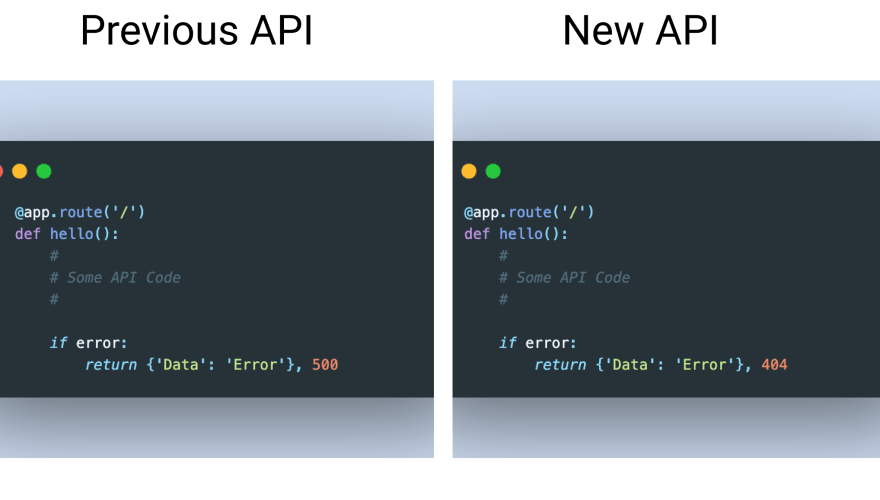 If you update the error response code for one of your API endpoints from 500 to 404, it could cause a bug. Consider the code snippet below:

If someone implements error handling but checks for a status code of 500, the new response code of 404 would not be handled. As a result, the code in the else block would be executed and lead to an error.

The above are just some of the possible problematic changes. Even updating things such as authentication or rate-limiting values can cause bugs in your team members’ code.

In addition to the possibility of breaking changes, the following are other reasons to share changes with your team:

There are multiple ways that you can keep your team informed of changes. Here are some options.

You can set up a code review system to ensure any updates to your API are reviewed by your team members before they’re finalized. This gives your team a chance to identify issues and suggest enhancements.

Tools like Optic allow you to review these types of changes. Below is a sample API changelog generated by Optic:

Optic also offers a GitBot that can add API changelogs to every pull request you make:

One way to make sure that your team is aware of any API changes is to use a separate channel for sharing these changes—for instance, a Slack channel or an email list. This will ensure that everyone knows what to expect. Below are a few tips to manage such a channel:

When it comes to API changes, having comprehensive and up-to-date documentation is essential. This will help ensure that everyone on your team understands the changes and knows how to implement them.

The documentation can either be updated manually or through automated services such as Swagger or Postman. Optic, for instance, analyzes requests, responses, and traffic to your API to more accurately document it and present changes. Read more about how Optic handles API changes in documentation.

If you are updating your API based on user feedback, you can work with your team or stakeholders to build an API contract describing how your API should function. You can use JSON schemas to document your API’s endpoint response codes and set up the contract. The contract must be accepted by all parties. Then, any changes made to the API must pass the contract test before being approved. Contract testing can be automated and incorporated into your CI/CD pipeline. Contract testing tools include Pact and Spring Cloud Contract.

Using versioned APIs allows team members and end users to continue working with an older version of your API while they update their code to work with the newer version. This significantly reduces the impact of any breaking API changes. But it comes at a cost, since you might still have to provide support for older versions. You will also need to maintain additional documentation to ensure users can still use older versions.

You could also define your API URLs so that the version number is included. For example:

This would ensure that any updates or new releases of your API don’t break your team member’s or end user’s code if they use the previous version.

Even small changes to your API’s response object or URL can have a big impact on other team members or stakeholders. It’s important to keep your team informed. Having a good workflow to share API changes, document them, and test them will prevent errors or other problems down the line.

One way to improve your API development workflow is to use Optic to automate testing, documentation, and transparency of changes. The tool tracks and reviews API changes by generating a changelog, then uses requests, responses, and traffic to your API to generate documentation.

Want to know more? Optic is an open source project, so you can join the community working hard to make writing documentation easy

Once suspended, rahulbanerjee99 will not be able to comment or publish posts until their suspension is removed.

Once unsuspended, rahulbanerjee99 will be able to comment and publish posts again.

Once unpublished, all posts by rahulbanerjee99 will become hidden and only accessible to themselves.

If rahulbanerjee99 is not suspended, they can still re-publish their posts from their dashboard.

Once unpublished, this post will become invisible to the public and only accessible to Rahul Banerjee.

Thanks for keeping DEV Community 👩‍💻👨‍💻 safe. Here is what you can do to flag rahulbanerjee99:

Unflagging rahulbanerjee99 will restore default visibility to their posts.