In its simplest form the DSU is an array of integers called parent where every ith item has its parent stored in the parent[i] or the array, These relationships create one, or more, virtual trees. 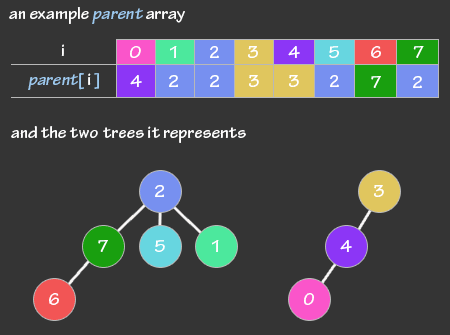 We can already write a simple implementation of a DSU. It will be inefficient, but then we'll improve it with two techniques, resulting in an almost constant time of work.

The three main functions of the dsu are:

However, such implementation is considered to be inefficient as building a large tree will cause the depth of the different chains to be larger which will cause a worst case of O(n) for the findSet function

To build a more efficient DSU there are two optimizations that can be done Path Compression and Combine by Rank.

Normally when using findSet to find a set of an element, the recursive function will traverse the whole parent chain of this element untill it reaches the representative or the effective parent of this set, This will cause the complexity of such operation to be of O(n) to avoid that we don't want to store the immediate ancestor for the element but store the top ancestor instead. 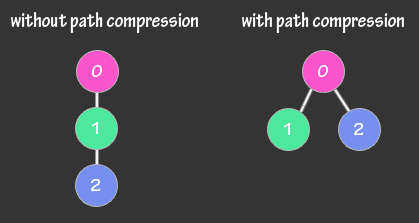 The new findSet() after applying the path compression concept should be as follows, notice that instead of returning the found parent, we save it before doing so.

The complexity after applying the path compression concept only would be O(log n) provided that unionSet() calls findSet() twice and does other O(1) operations that are ignored in the complexity calculation so the proof is concentrated on the O(log n) of findSet().

This technique has two variants, one that ranks the trees based on tree size (number of vertices) and the other one is based on tree depth. In this example we will be implementing the tree depth union by rank variant.

To Acheive this a rank for each node is initially set to zero and then incremented every time a new node is added to it. 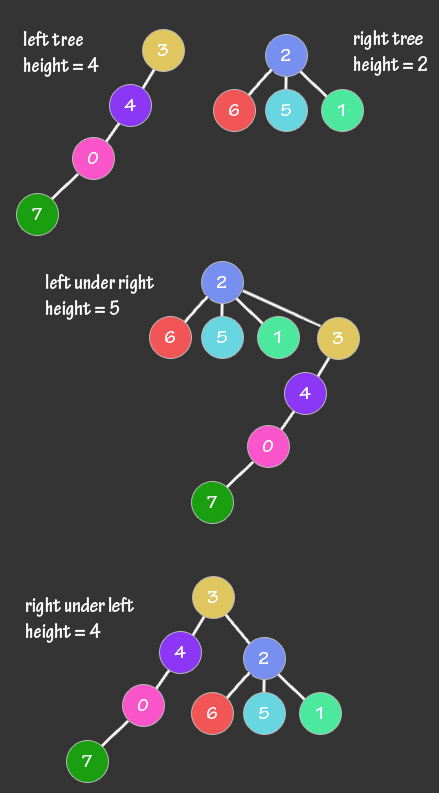 The full class after applying Path Compression and Union by Rank. Also notice that three operations have been added

Some Applications of DSU

Recursion, why is helpful but not in JS, ;(

Raggi
Passionate about backend engineering and building things
DISCUSS: If there's one CSS feature you could add, what would it be?
#discuss #watercooler #css
Iconic developers | part 2 🤓🦄🚫
#programming #discuss #webdev #watercooler
Manage all your home 🏡chores with this Notion Template🔥
#productivity #watercooler #showdev