​Tempo (the Radix consensus algorithm) provides one fundamental constraint: eventual consistency of state. To meaningfully build on top of this constraint, we need high-level, application-oriented constraints and structures. The Atom Model was designed to empower decentralised applications by enabling extensible implementations of financial systems (creating, minting, transferring and burning of tokens), data storage and transfer (messaging) and more.

In distributed data storage, all participants must agree on a set of rules that govern how a state can be changed. As not every node can store all states, a state must be divided into smaller pieces of state that can be validated without requiring all other states. For this to work, state changes have to be explicit and need to support a mechanism that accepts or rejects a batch of state changes as a unit. In Radix, these state changes are Particles and this atomic batch of Particles is an Atom. The Atom Model describes its structure, rules and interface with Tempo. 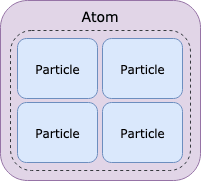 Particles in later Atoms may update Particles that were stored as part of earlier Atoms (e.g. to store that certain tokens have been spent). The current state of the ledger is therefore composed of all the latest Particles (i.e. state changes), whose ordering relative to each other is ensured by Tempo. 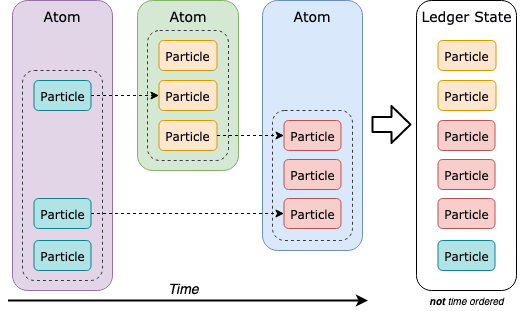 When many such state changes are to be submitted at once, it's hard to discern which belong together. This is troublesome for validation (i.e. accept / reject changes) as well as for end-users ("which Particles represent what?"). To provide a clear mechanism for Particle relationships, related Particles are grouped into Particle Groups.

Note that any Particle must be submitted as part of a Particle Group, Particles can't go inside an Atom directly. This explicit grouping mechanism makes developing libraries, wallets and of course Radix node implementations simpler as managing relations between Particles is natively supported.

Atoms, Particle Groups and Particles are the core structural elements of the Atom Model. The following sections define them in detail. 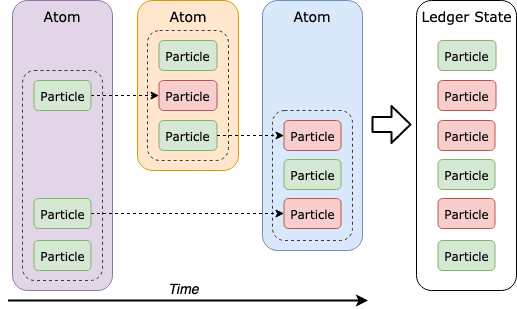 A Particle Group is a grouping of related particles with metadata in an Atom that represent one application-level action. An action could be issuing a transfer involving multiple particles, paying a fee, sending a message, or any logical action that a user or developer wishes to group.

Similar to Atoms, Particle Groups contain a string-based key-value store of metadata. This metadata is not validated or otherwise constrained in any way (besides size restrictions of an Atom) and can be freely used. Note that since all Particle Groups contain metadata and it does not influence other aspects of the Atom Model in any way, it will be omitted unless explicitly discussed for the rest of this article.

Using the index of the Particle Group a Particle resides in, and the Particle's index within that group, a Particle can be easily referenced within an Atom following the JSON pointer standard as follows:

Note that 'atomId' is computed using the hash of the Atom. See Formal Definition for further explanation. For example, the Particle identifier 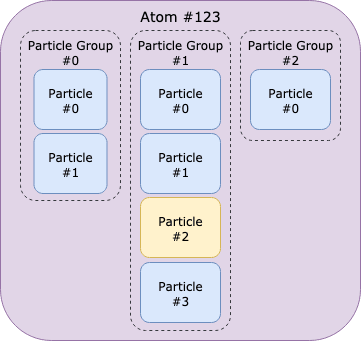 This is helpful for debugging when an Atom is rejected by a node, since it can point to a specific Particle in a human-readable way.

Dependencies within an Atom

It is often desirable to submit an atomic state change that is composed of multiple changes that are dependent on each other. Particle Groups in an atom can depend on the output of Particle Groups that come before it, ordered by index.

An Atom is an atomic container of state changes on the ledger. When an Atom is submitted to the network, either all its Particles (i.e. state changes) are accepted and stored or none are. 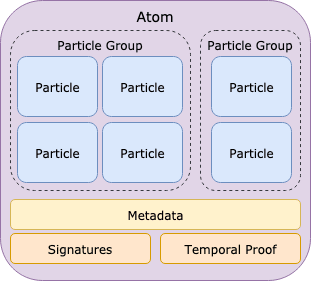 Atoms also contain a string-based key-value store of metadata. This metadata is not validated or otherwise constrained in any way (besides size restrictions of an Atom, see Formal Definition) and can be freely used. Note that since all Atoms contain metadata and it does not influence other aspects of the Atom Model in any way, metadata will be omitted for the rest of this document.

The atomicity of an Atom is useful for constructing complex actions where either all state changes are accepted or rejected a cohesive unit.

An Atom is only accepted when none of its Particles are rejected, regardless of their position in the Atom.

The structure of Particles is defined in the Particle document. As Particles do not share any required structure, there is no common base structure.

An Atom contains a non-empty indexed list of Particle Groups with Atom metadata. Atom metadata is similar to General metadata, except that it has special values that must be present and have value constraints:

An Atom's structure is defined as

The maximum number of bytes a compact serialised Atom may have is 65536.

The formal schema is a JSON schema that the JSON serialised version of an object must follow.

The schema of Particles is defined in the Particle document. As Particles do not share any required structure, there is no common base schema.

The formal JSON schema of a Particle Group is available here.

The formal JSON schema of an Atom is available here.

The Atom Model is currently implemented in Java on the development branch of the Radix Core (the primary implementation of a Radix node) and the Radix Client libraries.

The Radix Core implementation is currently only accessible to Radix Core developers.