What Is This Article Really About?

This article is an attempt to start a conversation related to the following subjects:

One of the biggest problems with passwords is:

User's create bad passwords, based upon common words they can remember.

Creating bad passwords based upon words found in natural language allows hackers to do dictionary attacks against passwords. In other words, hackers can keep on guessing words or word-pairs until they've guessed the user's password.

The other main problem with passwords is:

Requiring the User To Know Their Passwords Creates Vulnerability

Because user's have to memorize their passwords, they end up creating weak passwords (so they can remember them). Or, they end up writing them down. Saving them in a file or use other methods which create additional vulnerabilities.

Any password that is based upon words is ultimately weak. That's because eventually some algorithm will shove enough words together and replace enough alpha characters with numbers (th1nkAb0ut1t) that it will generate the password.

Now that is a strong password. It's random. However, you can't create an algorithm that re-generates the same random events that created it.

How Can You Memorize the Un-memorizable?

But, how can someone remember a password that is random?
They'd have to write it down somewhere or store it in a spreadsheet 😆 (yes, people really do this).

Randomly Generated Passwords Is What It Is All About

That's what this article is all about:

However, to show you how this would work, first we need to talk about hash functions.

Do You Know What a Hash Function Is?

We can think of a hash function (or just hash) as a one-way encryption technique.

That means the computer algorithm takes an input and will turn that exact input into one and only one output. 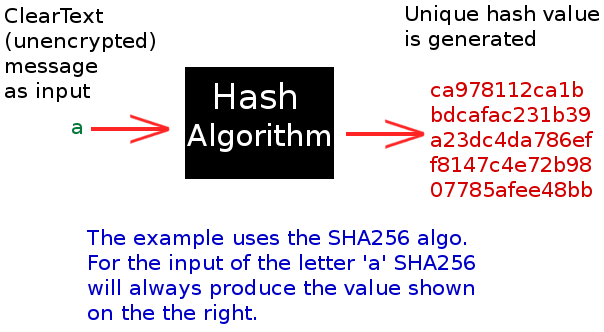 I use a black box (in the diagram) for the SHA-256 hashing algorithm, because we don't have to know how it all works. All we have to know is :

A Hash Can Be Used To Identify A File

Did you know that you can use a SHA-256 hash to identify a file? That's right all you do is read all the bytes into a string and pass it to the SHA-256 algorithm and you'll get a hash. Since there is one output for every unique input, if the bytes are the same (in the same order) for two files then they will produce the exact same hash.

We Can Prove It With VirusTotal

I've created a text file named a.txt that contains only the ascii letter a in it. That's the same input that we had for the SHA-256 algorithm in the diagram above.

Have You Ever Used VirusTotal.com?

VirusTotal allows you to scan any file with over 60 different anti-virus software packages. All you have to do is go to the site and upload your file.

VirusTotal uses the SHA-256 algorithm to identify files which are uploaded. That way if two people upload the same Windows DLL the system will know they are the same file and if it was safe for one person it will be safe for the other.

Check out what I get when I upload my a.txt file: 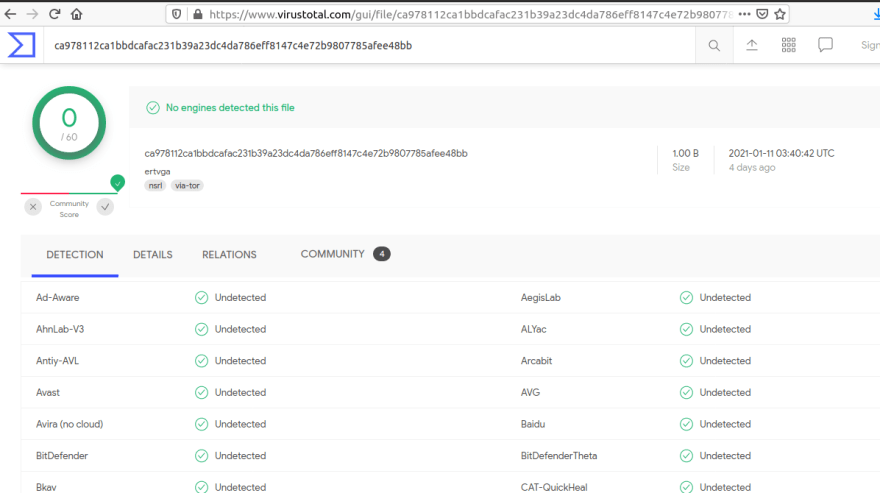 If you click the [Details] tab you will see that VirusTotal actually runs a few Hash algorithms on the file (MD5, SHA-1, SHA-256). 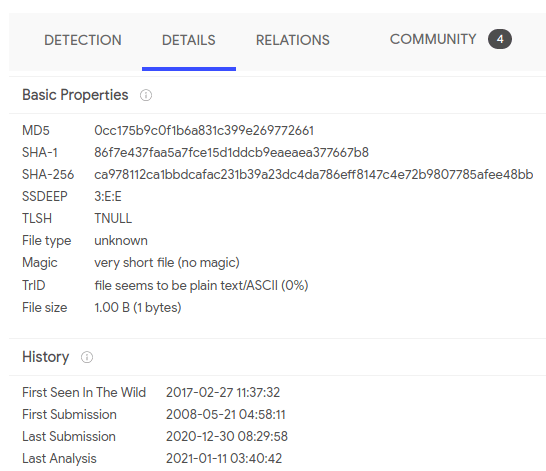 Every File Has It's Own Fingerprint

Since every unique file has a unique set of bytes, every file has its own unique fingerprint.

Every Set Of Bytes, Has It's Own Fingerprint

Take that one step further and you can see that every set of bytes has it's own unique SHA-256 Fingerprint.

A collision is when two different inputs actually produce the same hash output.

However, collisions are improbable and theoretically wouldn't occur after 100s of years of attempting to generate a collision.

This means that any input will produce 1 value out of HUGE-NUMBER.

Reach In Bag, Pull One Random Item Out

Think about this experiment.

The point of all that is that at present time, no one believes there is a vulnerability in the SHA-256 algorithm.

But Couldn't Someone Make Lookup Tables For Hashes?

Since every input has an exact SHA-256 output, a person could create a huge database that maps millions of inputs (cleartext passwords) to SHA-256 values.

Here are some words and their equivalent SHA-256 hashes.

That's Why We Need A Salt

In order to make it more difficult (or theoretically impossible) for someone to get our original value, we need to add a 2nd value to our initial input. This 2nd value is called a salt.

For example we could create an additional word or phrase that we would append to every input that we will hash.

Here's all of the previous words with their associated hashes after adding the same salt to each one.

As you can see, every hash is drastically different than they are in the first chart.

Now, let's make our mental leap on how we can use the SHA-256 to make better passwords.

Let's just use the SHA-256 hash as our password. What!?!
I'm saying, generate a SHA-256 hash and then enter that in the password field.

For example, I could hash my website name with a secret salt and have a password for that site.
Let's call that thing the site-key. It's the key I'll use for the site I'm logging into. It's really just a reminder so I know which one I'm using for a particular site or service I'm logging into.

The Formula For Passwords

Here's a chart showing 4 web sites and the associated passwords (hashes) I would use for them.

See the last section of this article (Bonus Material) to see sample code in NodeJS & C# that will allow you to generate your own SHA-256 values.

You could do all of this work and then your password wouldn't actually be stored anywhere. Instead it would be generated from those two pieces of data (ClearText site-key and the salt value).

But, it might be kind of a pain to manage it all.
That's why I created C'YaPass. It does all of this for you.
And, to make sure your salt is unique, it lets you draw a shape to create the salt.

You can get the open source code at: my github repo.
It's an ElectronJS app which will run on all three major platforms (Win,MacOS,Linux).

You can view the readme at GitHub and it'll show you the 3 easy steps to get the code and start it up.

Here's how you'll use the app.
You'll follow the simple steps:

You can simply copy it, because each time the password is generated, it is copied into your clipboard so you can paste it.

You know all of those super annoying password requirements that each site sets up differently? Things like:

C'YaPass remembers all of those for you.
When you add a password, you initially set all of the password requirements that you want set. It looks like the following: 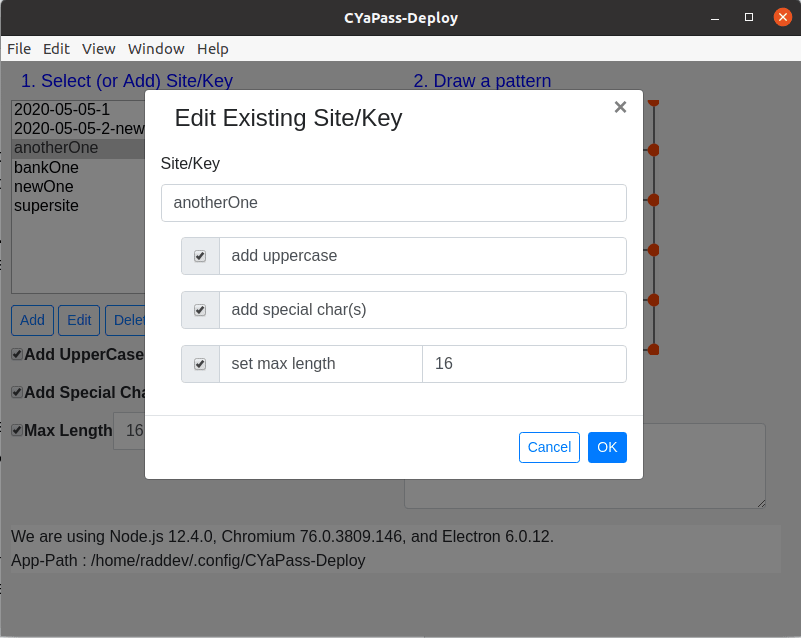 See here is the anotherOne password that is 16 characters, contains a special character and includes an uppercase : Ab#9e4235938f5dc 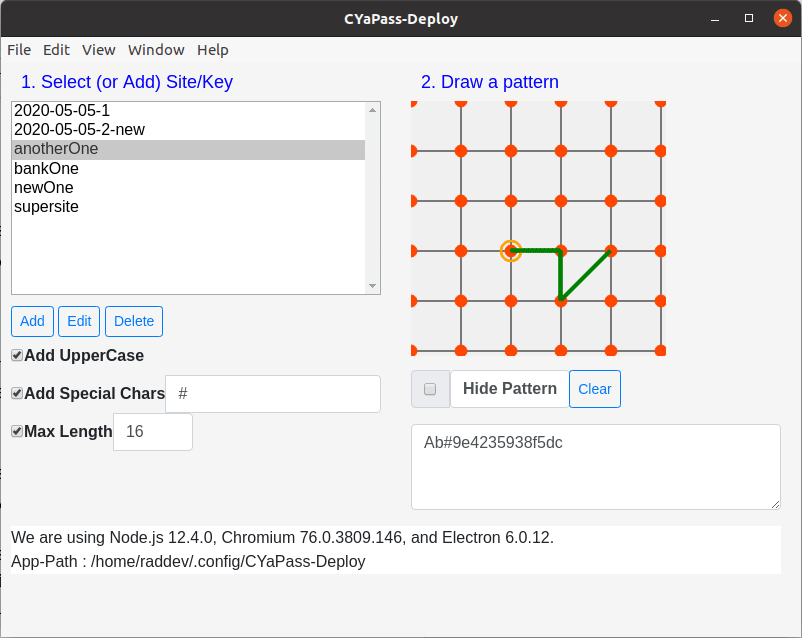 Only Have To Create One Pattern

Just switch your selection of the site-key and the new password is copied to your clipboard and ready to go. 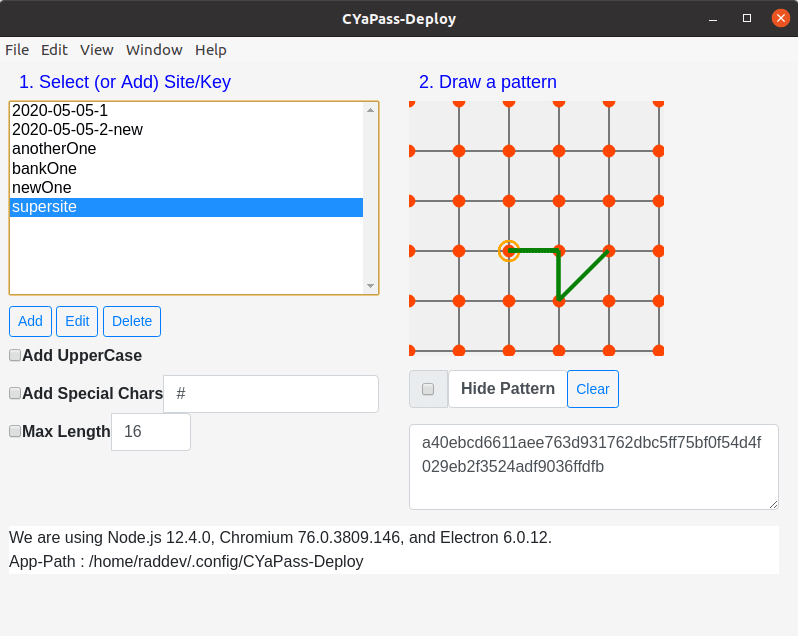 This also means that every one of your sites and services will have a different and super strong password.

Allow me to repeat the fact that your password is not stored anywhere. It is not stored locally or remotely (in a local file or on a remote server).

The one thing that is stored (in JSON) is your site-key that's the first part of the two-part salt.

Your Pattern Is Not Stored

The pattern you draw to salt your site-key is not stored anywhere either.

This means that an attacker would have to get your site-key and reproduce your pattern in order to generate your very strong password.

Grab the code and try it out. It's all open source so you can examine it for yourself.

Android users can get the app at the Google Play store. Try it out and see what you think. It's really nice on mobile devices because you can use strong passwords and never have to type them again. It's so difficult to reproduce a strong password by typing.

Note: You may find two apps named C'YaPass, that's because the older one had AdMob ads enabled. This new one has no ads.

Apple I had an iOS native app in the App store but I let my dev account lapse and the app was never quite as good as the Android version.
You can get to the app as a PWA (Progressive Web App) at : https://newlibre.com/cyapass/

This app will work offline and is a very good way to try out the app in your browser.

Linux users can install the app directly from the Snap store at: https://snapcraft.io/cyapass.

You can also read some articles and more about C'YaPass development at my official C'YaPass web site: http://cyapass.com.

If you'd like to try generating your own SHA-256 hashes, the easiest way to do it is if you have NodeJS installed on your machine.

If you do, then go to a command prompt (console or terminal) and type
$ node -- starts the node REPL
>Crypto = require('crypto'); -- loads the crypto library
>Crypto.createHash("sha256").update("your text").digest().toString("hex") -- generates the hash and prints it on console
There is not supposed to be a break in that second line where the createHash method is called. And the "your text" string is the string that you want to hash.

Here's a snapshot of it in action.

First, go and get LinqPad: The Programmer's Playground
NOTE: Make sure supersimple.txt file contains the data you want to hash and that the path is correct in the short sample below.
Then use the following code:

Open up a PowerShell window in Win10 and use the following code to generate a SHA-256 Hash. Simply change the string value that is passed in on the third line of the code.

Rules for Decorators: Why meta-programming in Angular sucks, and what you can do about it

Once suspended, raddevus will not be able to comment or publish posts until their suspension is removed.

Once unsuspended, raddevus will be able to comment and publish posts again.

Once unpublished, all posts by raddevus will become hidden and only accessible to themselves.

If raddevus is not suspended, they can still re-publish their posts from their dashboard.

Once unpublished, this post will become invisible to the public and only accessible to raddevus.

Thanks for keeping DEV Community 👩‍💻👨‍💻 safe. Here is what you can do to flag raddevus:

Unflagging raddevus will restore default visibility to their posts.