Hello everybody I created a python package to easily construct a MVP PyQt5 application. I will leave here the content of the project's README.md.
You can review the source code here.
And you can find the pacakge in pypi.

easy_mvp is a package that makes it easy to build desktop applications
using MVP pattern, Python and PyQt5. This is achieved by using
a set of classes and practices similar to those used in the Android framework.

The basic idea behind this package is to open a presenter from
another presenter and that the new presenter fills the window for
complete. This is similar to Android applications, which
when opening a new Activity, they replace the old one with the new one.
If the Back button is pressed, then the new Activity is removed
and the old one reappears on the screen. This gives the impression
that there is a stack of Activity.

In addition, easy_mvp offers the possibility of doing the above in more than
a window, since desktop applications are very different to Android apps.

The following explanations are reflected in demo.py program.

The application model created by easy_mvp is like this: 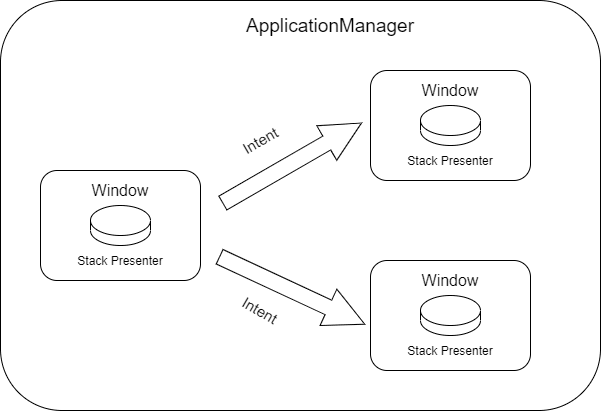 The ApplicationManager class is the entry point of the program. This
class is the one that knows the windows, creates them and destroys them. Each
window holds a stack of presenters. In this way it is implemented
the same behavior that Android applications have. Class
Intent is used to transition from one presenter to another,
regardless of whether the new presenter is started in a new window.

The behavior of the windows is represented as follows: 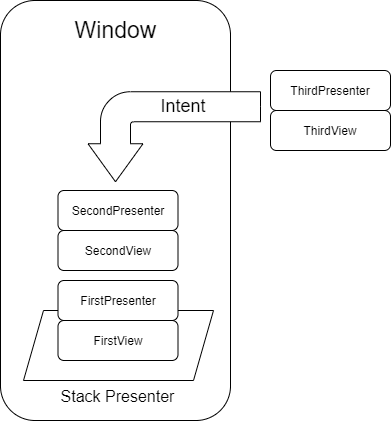 As you can see the window has a stack of presenters, the
which are attached to their views, therefore all the
presenters must possess a view. Again we can see that the class
Intent is the one that allows to add a new pair of presenter-view
to the window stack. For this mechanism to work, the presenter
classes must inherit from the AbstractPresenter class.

AbstractPresenter has several methods to open new presenters,
close the current presenter and to handle certain flows within the
application, such as when a presenter is going to be initialized, hidden,
or closed.

The flow of events in a class that inherits from AbstractPresenter is like this: 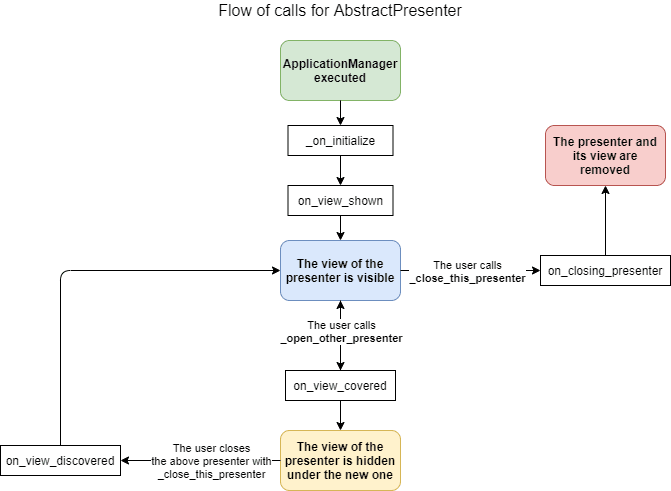 The _on_initialize method is the first method called in the AbstractPresenter class.
Here the instance variables of the presenter must be initialized. Also you must
create the instance of the view that corresponds to the presenter. Once created,
the view instance must be set with the _set_view(view) method, from
this way the view is made accessible to the rest of the classes in easy_mvp environment.
The view can be obtained with the get_view method of AbstractPresenter, if it was set
by _set_view(view) first.

The on_view_shown method is called just after the presenter view
is displayed in the graphical interface. In this method the data should be loaded,
and the tables and forms filled.

If now the top presenter calls _close_this_presenter, then the
presenter view just below it will be visible again, and the
presenter will receive control of the main thread via on_view_discovered.
In this method the view should be updated due to some change in the model.

When the presenter at the top of the stack calls _close_this_presenter
receives the control with the on_closing_presenter method. In this method
resources should be released and observers removed. After the call to
on_closing_presenter the presenter and the view of the presenter will be
removed and it will happen what it has been explained previously.
It should be noted that if the presenter who closes is the
only one that exists in the entire application, that is, there is only one
window and it owns only a presenter then the application will close with
the status code 0. To close the program with different code, use the exit_app
method of AbstractPresenter.

A presenter can receive data from another presenter that it has created,
if the second one is closed using the _close_this_presenter_with_result(result_data: dict)
method. In this way, the presenter that is below in the stack receives control of the
program via on_view_discovered_with_result(action: str, data: dict) instead of
on_view_discovered. The action parameter is the action that was passed to the Intent when
it was ordered to open the new presenter. And result_data is a Python dictionary that the
presenter who was on top can pass through
_close_this_presenter_with_result(result_data: dict).

An intent can be specified with an action with set_action(action: str), like so
the new presenter may behave differently depending on the action received.

Intent also allows data to be passed to a new presenter via set_data(data: dict).
To see examples of how Intent is used, check out the demo.py program.

Tweet-counter: A module to calculate the length of a tweet

Once suspended, r0land013 will not be able to comment or publish posts until their suspension is removed.

Once unsuspended, r0land013 will be able to comment and publish posts again.

Once unpublished, all posts by r0land013 will become hidden and only accessible to themselves.

If r0land013 is not suspended, they can still re-publish their posts from their dashboard.

Once unpublished, this post will become invisible to the public and only accessible to R0land013.

Thanks for keeping DEV Community 👩‍💻👨‍💻 safe. Here is what you can do to flag r0land013:

Unflagging r0land013 will restore default visibility to their posts.