Like all good superheroes, every company has its own origin story explaining why they were created and how they grew over time. This article covers the origin story of QuestDB and frames it with an introduction to time series databases to show where we sit in that landscape today.

Part I: Time series data and characteristics of TSDBs

Time series is a succession of data points ordered by time. These data points could be a succession of events from an application’s users, the state of CPU and memory usage over time, financial trades recorded every microsecond, or sensors from a car emitting data about the vehicle acceleration and velocity.

For that reason, time-series is synonymous with large amounts of data. Unlike traditional databases in which older data entries are typically updated with the most recent data point to show the latest state, time-series databases (“TSDB”) continuously accumulate data points over time. This way, one can draw insights from the evolution of metrics over time to conclude meaningful insights from the data. Better yet is to predict future events through machine learning models based on historical time-series analysis.

Time series databases were successfully adopted for use in financial applications (the world QuestDB’s team comes from) where storing and querying changes in stock, price, quantities and transactions over time is business-critical. With the rise in the number of connected devices, application monitoring and observability, time series data is proving to be critical in nearly all fields. 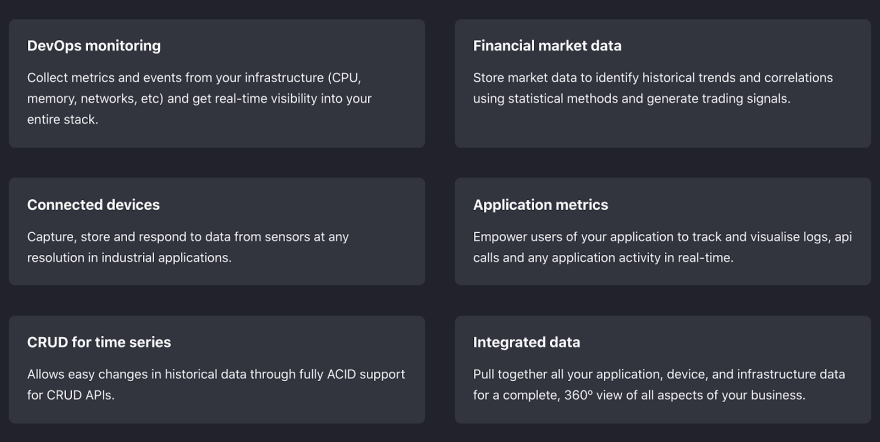 As a result, time series has been the fastest growing database category for the past two years according to DB-engines.

Performance is the pillar of a time-series database

As use cases which generate data suitable for time series analysis are increasing exponentially, so is the amount of raw data itself. This means that TSDBs must be designed to handle exceptionally large volumes, specifically, performant ingestion (WRITE operations) is a cornerstone feature.

Time-series data is typically found in very demanding enterprise use cases where requirements for ingesting data are usually around a million data points per second. The ability to deal with multiple sources of data is also paramount.

For example, stock market events occurring on a microsecond (and nanosecond) frequency, or thousands of IoT sensors sending atmospheric data continuously from an offshore oil & gas rig. Most importantly, enterprises expect databases to handle bursts of data which are high volumes of data incoming at irregular intervals. This is very common in financial markets, with spikes of trading volume occurring after events which are difficult to predict.

Once all of the data is stored into a database, most use cases require to query (READ operations) this data in real-time. Operations teams will need to see relevant metrics that show the state of application servers as soon as an
anomaly is found. E-commerce websites need to analyze immense datasets of buyers’ behavior over time to gather new insights and optimize their stock in consequence. A fintech company will want to detect fraud as transactions occur.

TSDBs most important features and trade-offs

TSDBs are not optimized for OLTP workloads that typically include lots of regular updates and delete operations. Those are better handled by relational databases such as PostgreSQL, MySQL, SQL Server or Oracle.

In contrast, time-series data is mostly an append-only workload with delete operations performed in batches on less recent data. Typically, users are concerned the most about the recent data coming in that is being analyzed on the
fly. We list some of the most interesting features of a time-series database. Further, we summarise how QuestDB addresses those needs.

Part 2: Why we set out to build QuestDB

When it all started 7 years ago

Our CTO worked in electronic trading, building systems for more than 10 years. In 2013, his boss would not allow him to use the only high-performance database suited to deal with time-series data because of its proprietary nature and price.

QuestDB was built with the intention of democratizing the performance that was only available for high-end enterprise applications, and to make the tooling available for every developer around the world leveraging an open source distribution model. Instead of writing a new querying language from scratch, QuestDB would facilitate adoption and accessibility via SQL rather than a new complex proprietary language.

We have heard a large number of companies complaining about the performance limitations of open source time-series databases. Most of those re-use existing libraries or are an extension of a well-known database which was not designed to process time-series data efficiently in the first place.

Instead, we chose an alternative route which took more than 7 years of R&D. Our vision from day 1 was to challenge the norm and build software that uses new approaches and leverages the techniques learned in low-latency trading floors. An important aspect was to study and understand the evolution of hardware to build database software that could extract more performance from CPUs, memory, and modern hard disks.

QuestDB is built-in zero-GC Java and C++, and every single algorithm in the code base has been written from scratch with the goal of maximizing performance.

QuestDB’s data model (time-based arrays) differs from the LSM trees or B-trees based storage engines found in InfluxDB or TimescaleDB. It requires less overhead and data duplication while maintaining immediate consistency and persisting data on disk.

This linear data model structure massively optimises ingestion as it allows the database to slice data extremely efficiently in small chunks and process it all in parallel. QuestDB also saturates the network cards to process messages from several senders in parallel. Our ingestion is append only, with an order of complexity O(1); QuestDB does not rely on computively intense indices to reorder data as it hits the database. Out of order ingests are dealt with and re-ordered
in memory before being persisted to disk.

QuestDB’s data layout enables CPUs to access data faster. With respect to queries, our codebase leverages modern CPU architecture with SIMD instructions to request that the same operation be performed on multiple data elements in parallel. We store data in columns and partition it by time in order to lift the minimal amount of data from disk for a given query.

In order to showcase the capabilities of our database, we decided to put together an online demo, which features a 1.6 billion rows dataset with more than 10 years of NYC taxi and weather data (350GB). The hardware powering the demo is a c5.metal instance (AWS) with 24 physical cores and 192 GB of memory. The data is stored and accessed from disk, none of the results are cached or pre-calculated. The postmortem of QuestDB’s ShowHN on HackerNews can be found here.

QuestDB and its growing community

Pushing database performance higher and higher still while making it easy for developers to get started with our product is what motivates us every day. This is why we are focused on building a strong community of developers who can participate and improve the product through our open source distribution model. We hope to see you on our Slack channel.

Automate All the Boring Kubernetes Operations with Python

A tool to seed your dev database with real data