February of 2018 saw me leaving the cold winter of Ottawa to bathe in the mild warmth of San Francisco. This wasn’t a vacation. I was tasked with donning the Qlik cap and representing our developer relations team with a talk. With five days full of workshops — I couldn’t just fly in, speak and fly out. I had to take advantage.

Day 1 of ForwardJS had me digging into WebAPIs with Aysegul Yonet. A tiny class with fewer than ten attendees meant we could get a lot done quickly and have some hacking fun of our own. While Aysegul covered the basics of a bunch of the different options now available to us devs in the browser, the funnest part was coding a script to see exactly how much of my hard drive IndexedDB would allow a site to eat up. Not very often a workshop has me routing for a script to win against my machine.

Day 2 for me was the conference itself, which meant a less technical talk on the downfall of this years Ottawa Senators entitled “My Hockey Team Sucks” and a day of chilling at the Qlik table with Ana Nennig pimping our awesome Branch swag and talking about the awesome power of the QIX engine. 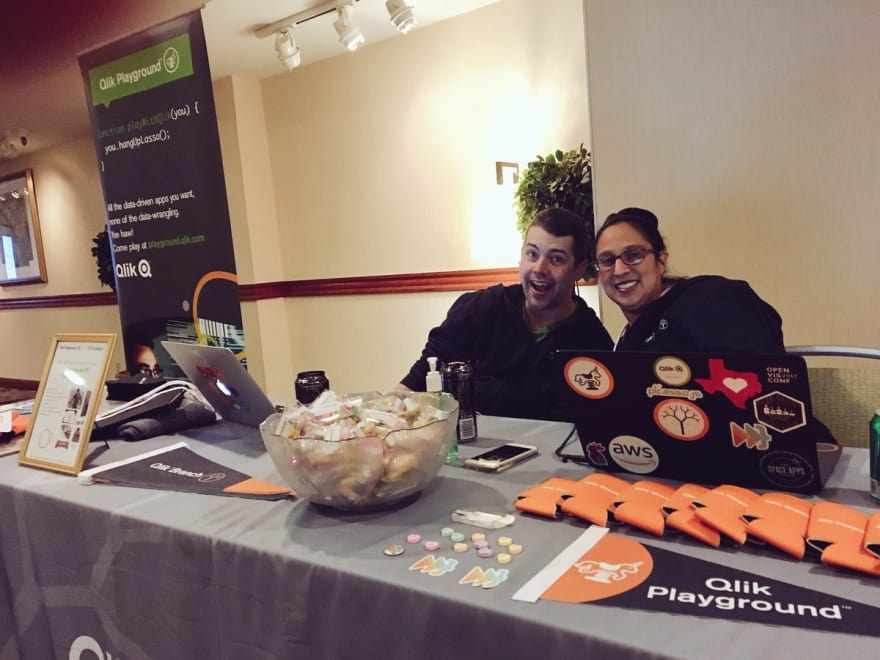 That’s a wrap for our table @forwardJS, it was a blast talking to all of you today! Rey & Ana left you some Valentine’s candies at registration. Please share your fun pics with our swag in action via @qlikbranch...and stay in touch! #ForwardJS 🤘🏼

Day 3 brought me Brian Holt and his React + Redux workshop. I was really impressed with how Brian started with the basics, making code each element using React.createElement to see how the process works. A little while later (after getting over that icky feeling in my stomach that came from putting HTML in Javascript) we were introduced to the wonderful world of Redux, reducers and Redux middleware. This was a great workshop that Brian has brought around the world (which he tracks in the repo), so if it’s coming to a conference near you I suggest grabbing a seat.

Last day of the conference had me sitting in on Webpack 101 with Freddy Rangel. Starting at the basics of initialization and running all the way through tree-shaking, Freddy did a great job of helping me de-mystify one of those things I usually leave to the Angular CLI to figure out. It’s also always nice when a teacher introduces a new teaching technique and Freddy’s approach of having a separate GitHub branch for each module made keep pace a breeze for everyone in the workshop.

Overall I’d say the San Fran ForwardJS was a pretty great success and I knew I’d have to work extra hard with Dave Nugent to make sure its Canadian counterpart lived up to the Forward reputation.

What does Create React App Include?