Not gonna lie - I was not expecting to learn this much when I started off with my first-ever CTF with Major League Hacking (huge props to Karan and Gabe from MLH 💯 for making it happen). My first interaction was CTFs were earlier this year when I came across the omnipresent Live Overflow channel (if you haven't watched any of their content yet, you're missing out!) but it seemed all too vague and complicated for me. The first real CTF "problem" I solved was one that Karan sent us (his underlings, so to say?) - involving an HTML page with the flag directly in the source code. While solving that gives you a sort of a high, you have no idea what you're getting into, with each problem (d)evolving into an intricate mess of problems, with each having an increasingly gratifying solution. And that's just the beginning of the story.

Anyone new to CTFs probably gets to know of Hack the Box, and makes an account using their super-secure system, and does a few challenges and lets it be - well, same. But, let's talk about this MLH CTF, the CTF for the Batch 1 of MLH Fellows. I'm not gonna lie but when we solved the first few, we were pretty confident about getting through it easy, until of course, later.

So, for today, I'll talk about the challenges that I felt were the most unique (not necessarily ones that I liked). 🥱

The "...ticket that leads you to the place is within the
registration email" is a pretty blatant hint, I can just search for the email using filters.

Once you click on reply to the email and hover over the email ID, you should get a dynamically generated hovercard, which contains the UID of the user. Then, you need to make an educated guess about where to go next but the fact that we have a video of the Santa Village and you needed the Gmail address should tell you where to go next - of course, Google Maps. In fact, you could've just looked up the reviews of the village in the course of the investigation (as a lot of people did) and even found Karan's reviews (which also a lot of people did).

The approach was to basically access the user's map contributions by going to https://www.google.com/maps/contrib/<user-id> and finding the reviews (well, not exactly).

But as has been said, it's a miscellaneous challenge, not an OSINT one.
The second part is a steganography challenge and it's not immediately clear sadly. But hey, sometimes you gotta try everything. The flag was actually (very well) hidden in one of the images (out of two) uploaded with the reviews (out of two). I was eventually able to extract the flag with PCA with relative ease, just took a while because it can be literally anywhere. 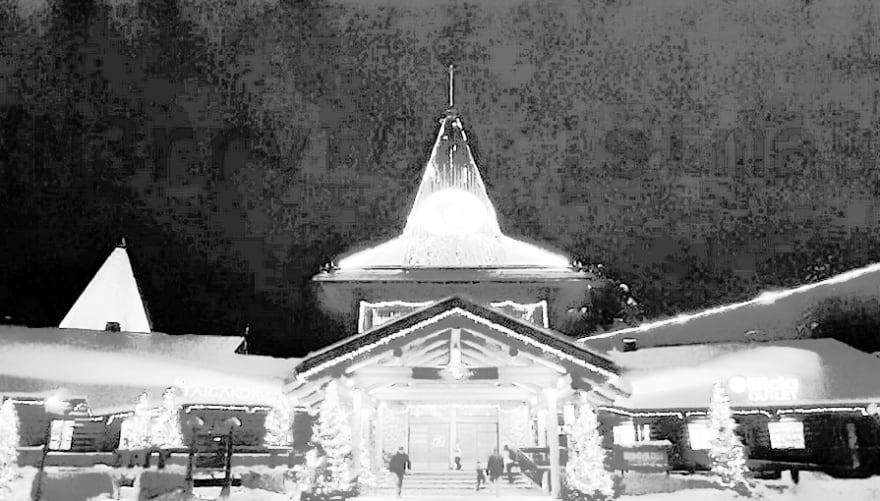 This one took a while because no one in our team had resources for APK decompilation. One of our team members had ADB logcat and that is where we discovered the first chunk of information, as to insight into what the challenge is all about. To be quite honest, this problem had one of the least intuitive and beginner-friendly solutions and required quite a lot of intricate AWS knowledge. If you have worked with certain AWS SDK features or something like flaws.cloud, this might be easy, but otherwise, I felt this was extremely restrictive.

Using logcat, we can see what the app is doing once we press "Send feedback":

Simply put, the app is PUTing our feedback as a feedback.json file to S3. Any requests except POST gave us AccessDenied so it was clear that the ACL was strict, making a POST however kept having weird validation, and even after we met the requirements, the server gave the same validation error. Eventually, I abandoned this attack surface.

This was very annoying because we didn't have the resources, so I started by installing mobSF and Genymotion, the app looks great and all and also does a lot of security analysis, such as searching for trackers and malware - but in this case, it was (almost) pointless. There was nothing in the Java files and Genymotion just didn't work.

I then proceeded to use an online decompiler at decompiler.com which is a typical JADX compiler and I was able to access the resources folder (as well as the Java files) which had what I believed to be was necessary for the exploit to work. The funny bit was that despite having opened the same file the previous day, I never realized that they were usable credentials. In the resources folder, we see a res folder, with a raw/awsconfiguration.json file:

After reading a bit up on AWS theory (yes, really...), we figured that the Cognito Identification Pool has to be unauthenticated because there were no other credentials being exchanged, so the key was to get an ID from our ID Pool, exchange it for STS tokens and use those credentials to access the S3. While I was exactly right in this case, I still wonder what would happen if I wasn't, but anyway. 🤷‍♂️

I started working on a Node script and built something from sample code to generate the required credentials, and as expected, Cognito was giving us proper access tokens, where it failed was retrieving resources from S3 because of CORS. And while I was going bonkers, a teammate wrote a script with boto3 to do this. Oh also, I don't know how to write Node.js, so probably that was the problem.

We can then see the very first item in the S3 is the flag:

This challenge was on a different level, not gonna lie. I mean, to veteran CTF-ers, this would be medium (?) at best, but it was an absolute wreck for our team, as all of us were beginners. But the best part, we eventually solved it, right as the CTF was ending, tying in points but 4 minutes later than another team. Quite dramatic, yes.

I had a serious love-hate relationship with this relationship but I probably learnt the most from this one. The first step to solving this challenge was to take apart the source code with a fine toothpick and secondly, understand how PNGs work. Since I am how I am, I did neither and immediately dug into the different kinds of possible attacks, known-plaintext, chosen-plaintext, forbidden whatnot (well, it was somewhat like a forbidden known-plaintext attack).

So, the first step! Research. I read up on how block ciphers work and more importantly, the counter mode - really what that means is that I read a bunch of pages on Wikipedia. 🥱 But seriously, it was kind of worth it. In particular, I noticed the paragraph about known-plaintext attack but didn't understand anything because, yeah, cryptography, amirite.

But I read this and that, one-time pad attack, two-time pad, all of that (yes, I was basking in my ignorance). All of that until the first hint was released:

the CTR implementation is buggy

Despite knowing this, I had never actually figured out what was the bug - because I assumed that the bug was actually the code itself, which itself was only buggy because it was written with OpenBSD libraries not available on standard Linux distros. Ugh. (And yeah, those took hours to fix and script).

Eventually, I got around to seeing the inc_counter() function in the script and had a very vague suspicion if it was actually written correctly because of they way it was written, I was very sure it was not changing the counter at all (that was not the actual problem apparently). The issue was with the ctr_block_encrypt() function parameter which receives a copy of the struct instead of a pointer to it:

So, I set to debugging with my favourite debugger, fprintf. I wrapped them around the function invocation, and lo and behold, no increment! The nonce was being reused. This opens us up to the world of attacks based on nonce-reuse. The part after this was actually more painful - figuring how to guess the plaintext to actually get the keystream - and then the decrypted file.

We then dump the decrypted bytes into a .txt file, clean up the file to meet PNG specs (and remove the counter bytes), and open it to retrieve the flag!

And we can finally get the flag with our own eyes - mlh{n0nc3_m34ns_numb3r_u53d_ONCE}. Truly a thrilling end to this journey (I remember screaming after getting this flag). 🏁

While this started off as a CTF for beginners, it got really interesting and complex as it progressed, and not to mention, the reason we did well was because of my amazing teammates, Yash, Rohan, and Shivay. We got all of the challenges and in the end, that's what matters.

Writing a new programming language. Part I: a bit of boring theory

Once suspended, qedk will not be able to comment or publish posts until their suspension is removed.

Once unsuspended, qedk will be able to comment and publish posts again.

Once unpublished, all posts by qedk will become hidden and only accessible to themselves.

If qedk is not suspended, they can still re-publish their posts from their dashboard.

Once unpublished, this post will become invisible to the public and only accessible to qedk.

Thanks for keeping DEV Community safe. Here is what you can do to flag qedk:

Unflagging qedk will restore default visibility to their posts.