So iTerm2 has this neat imgcat command that allows you to "cat" or view an image right in the terminal. It's pretty sweet, but I had an idea: what if we used that with Git for diffing changed images in agit diff?

This seems like it should be possible, you can replace what git does when you do a diff of two different binary files. For example, the spaceman-diff package by Zach Holman does this to do a diff of two images as ASCII art.

We want to do the same, but instead of seeing an ASCII art version of an image, it'd be cool to see the two versions of the image itself right in the terminal.

The first thing is create a file in your home directory called ~/.config/git/attributes. In here you can define a mapping between file types and what command Git will run when doing a diff of those filetypes. In my case I entered the following:

This tells git that when doing a diff of a file that ends with png, jpg,gif, or jpeg to use the image config.

Set Up The Image Config

Now, in your ~/.gitconfig file, add the following:

Put imgcat In Your Path

Note that you have to put this script in your path, you can't just rely on the version that's inlined into your terminal with iTerm's shell integration.

Now when you change an image in a Git repo and do a git diff while in iTerm you'll see a preview of the original image and the changed image. Example: 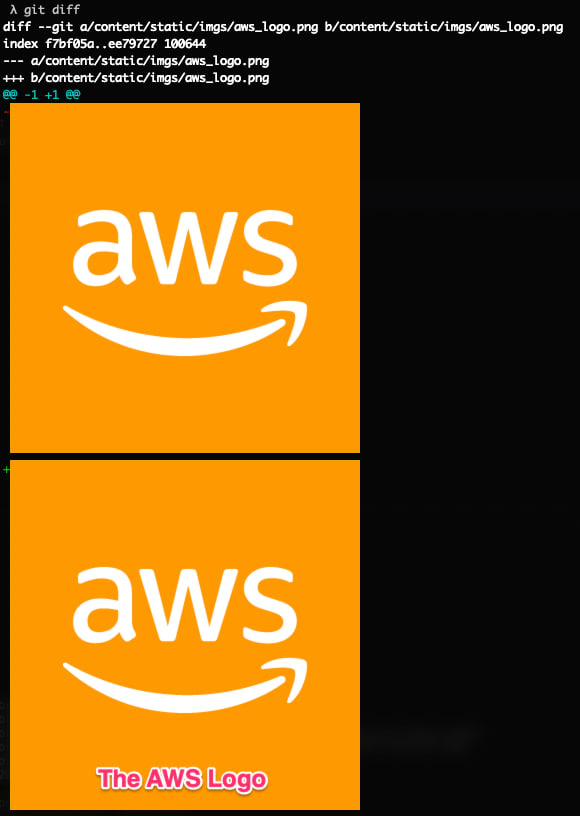 The above image is the original, the 2nd image is what I changed it to. Note that because imgcat is iTerm specific, it won't work in other terminals. If you do a git diff in a different terminal (ex: the integrated terminal in VS Code) you'll see just the ordinary blank output:

Once suspended, pzelnip will not be able to comment or publish posts until their suspension is removed.

Once unsuspended, pzelnip will be able to comment and publish posts again.

Once unpublished, all posts by pzelnip will become hidden and only accessible to themselves.

If pzelnip is not suspended, they can still re-publish their posts from their dashboard.

Once unpublished, this post will become invisible to the public and only accessible to Adam Parkin.