A few weeks ago I posted a code snippet about an async queue. I wrongly implied that this queue was performant but this was not the case (I mostly said it was performant according to other solutions I analyzed at the time) as stated by @peerreynders.

He came with an algorithm based on swapping arrays so the queue would stay performant without having an O(n) time complexity. I found some other algorithms here and there and I wondered wich solution would be the best one, so I benchmarked them.

To simplify the benchmarking, I dropped all the async handling layer, to focus only on the queue itself.

I tested 4 different algorithms. The related code is available on Github if you want to see the different implementations and the benchmark:

If you know other algorithms, please tell me and I'll add it to the benchmarks. 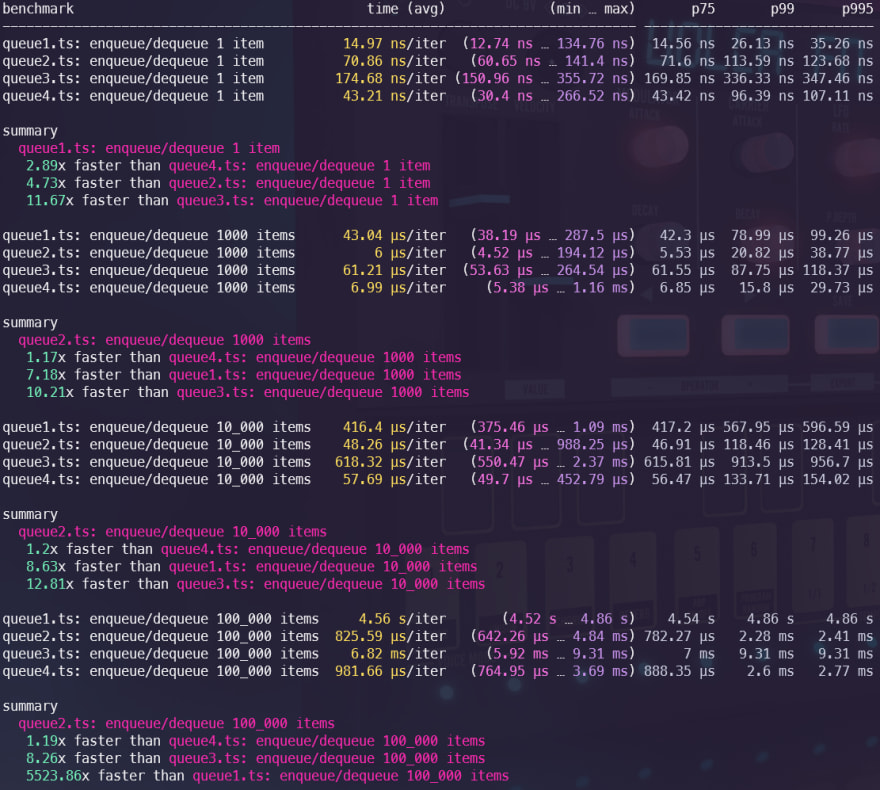 The first algorithm is performing better when there's only some elements in the queue. But the performance drastically decreases when reaching a few hundreds of them, and it becomes really critical when reaching thousands of items where enqueuing/dequeuing only one element on a queue of 100 000 items takes 4.5s...

The second algorithm is clearly the winner. But we could optimize things when there's only a few elements in the queue.

The third algorithm is the slower implementation, after the first one. This is because of the delete operation executed at each dequeue() call.

The fourth algorithm is performing well, but can be optimized. Currently, it updates the internal array when reaching the half size of it. It can lead to some performance issues when enqueuing/dequeuing items completely and constantly. To improve that, we could compute dynamically an ideal items count so we slice the array up more often.

To conclude: I need to update my code snippet 😀

Last note: Array.shift() is getting optimized on some platforms, but we shouldn't rely on this to implement algorithms, IMHO.

Aurélien Delogu
I'm a senior developer who thinks that coding is pretty much like art. I'm also crazy about sushis 🍣
How to use the contenteditable attribute in Vue 3
#javascript #typescript #vue #html
Code snippet: a simple rate limiter
#typescript #javascript
Code snippet: How to test and understand DOM events better with this simple HTML snippet
#html #javascript

Once suspended, pyrsmk will not be able to comment or publish posts until their suspension is removed.

Once unsuspended, pyrsmk will be able to comment and publish posts again.

Once unpublished, all posts by pyrsmk will become hidden and only accessible to themselves.

If pyrsmk is not suspended, they can still re-publish their posts from their dashboard.

Once unpublished, this post will become invisible to the public and only accessible to Aurélien Delogu.

Thanks for keeping DEV Community 👩‍💻👨‍💻 safe. Here is what you can do to flag pyrsmk:

Unflagging pyrsmk will restore default visibility to their posts.