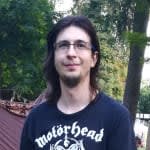 Another important improvement that boosted my performance and Lighthouse score was eliminating render-blocking resources.

When we usually build a project, we like to include everything we need right out of the box - all styles, JavaScript plugins, JavaScript code, fonts, images, etc. We usually do this to make sure that no async loading errors happen while we develop the project.

The reality is that browser needs to load, parse and run everything we include when website loads, which can make the first paint (with no cached resources) unnecessarily slow. It's called render-blocking because browser is wasting time and resources parsing the code that is unnecessary for the initial page load and not displaying the page content.

When we take a look at our resources (CSS, JavaScript, fonts, etc.) we can sort them into two categories:

So let's take a look how we to handle critical and non-critical CSS and JavaScript resources.

In order to add critical CSS to the page, we need to remove those styles from the CSS stylesheet and add them directly to HTML in a <style> tag inside a <head> element.

This approach may increase HTML document size a bit, but those changes are insignificant if you use compression algorithm like GZIP or Brotli for HTML delivery.

Adding critical CSS directly to HTML document ensures that those styles and parsed and applied on the first paint (initial load).

In order to handle non-critical CSS, we need to change how the CSS file which contains those styles loads.

This may look like a hack at first, but this is a really smart and efficient way of loading CSS in an efficient way with proper fallback:

It's also important to note that we can load Google Fonts stylesheets in the same efficient way!

At the time of writing this article, Firefox has a bug related to preloading CSS. This efficient way of loading non-critical CSS currently isn't working on Firefox, but it should be fixed soon.

You might want to provide a fallback for browsers that do not support preloading or have issue with it (like Firefox). Luckily, this is really easy to do with inline JavaScript.

We just need to add this code before body closing tag to insert the regular link element into head element for Firefox and IE browsers which do not support preloading.

We can handle non-critical JavaScript just by adding defer or async tags to script tag (inline JavaScript or JavaScript loaded from src).

These articles are fueled by coffee. So if you enjoy my work and found it useful, consider buying me a coffee! I would really appreciate it.

How to Build Dynamic Website with APIs, Without Backend Coding! 😮