In a React + React Router environment, routing configuration is a one-to-one mapping between a route and that route's display elements.

The above approach is suitable for simple applications, but, for complex ones, it's not really ideal.

Well, that's just what we're going to do! In this post, let's look at implementing modular routing in React.

We're doing this in 3 steps:

The Application, the Modules, and the Components

Let's say we're building a blog-writing application and we have decided to implement the ff. modules:

Given the above modules, we'll probably design the routing map like this:

Looking at the above routings, it seems like we're only going to have 3 components directly representing each of our main modules. But, we all know that these modules are still going to be composed of one or more components.

So, what do we do now? We "push up" the concept of modules and identify the actual components of the application.

Here's the new routing map but with an added Component column.

Now, we have identified the modules and components for our application. Let's go ahead and implement them!

Of course, the first step is to create a brand new React application.

Then, we'll install the React Router for Web Applications library since we're building a web application.

For simplicity, we remove all of the other files under the /src directory.

Then, we create a new index.js file:

And a new App.js as well:

Check out the code at this point here.

For better maintainability, the components should be grouped by their module. So, we'll have one directory per module and each of these directories will only contain the components relevant to their respective module.

Just to recap, we'll need to create the components:

Lastly, we'll need to create a Home component as well just so we can render a homepage.

For the Draft and Post Update components, we will use the useParams function from react-router-dom to get the draft or post ID passed in the URL.

For the Draft and Post Listing components, we will use the Link component from react-router-dom to render links to fake drafts or posts.

You can check out how the code looks like at this point here.

Now, onto the actual routing. We'll need to add the ff. code to the App component:

In the updated App code, we now have a navigation section, and the routes to the Homepage, Draft Listing, and Post Listing have been defined.

Now, how should we add the routes to the draft and post update components?

We can do this by updating the Switch section of the App component code:

Technically, the above approach will already work. But, there's actually a couple of issues here:

Before moving to the next section, you can check out what the code looks like at this point here.

To address the issues I mentioned, we have to consider one very important thing:

Modules should be stand-alone.

Modules should be treated as smaller applications inside a larger one. They have to be in charge of everything related to them and that includes routing. This means that we should detach a module's routing configuration from the App component and place the configuration inside its respective module.

To do this, we need to introduce Module Routers.

A module router, as its name suggests, handles all the routing for a module. For this example, Module Routers are special components.

Before creating the module router we first need to update the current routing configuration.

In the App component, instead of directly specifying the routes to the Draft Management components, we now do this:

So, what we're doing here is:

We then create the actual DraftRouter component. It looks like this:

Here's what's happening inside the DraftRouter:

As you can see, we used the modulePath property to dynamically inject the /drafts path. There's no need to hardcode that path in this component as well.

To check out the final state of the code, click here.

So, that's it! We've successfully implemented modular routing in React.

At this stage, our src directory looks like this: 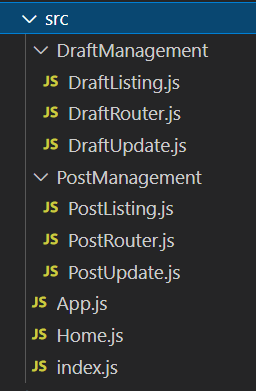 With this approach, we can now enjoy the ff. benefits:

Anyway, I hoped you learned something new from me today. Let me know your thoughts in the comments!

How to Create Your Own VS Code Extension: A Simple, Step-by-Step Guide