Hey everybody, I'm Jeff. I often use the name progrium on the Internets. I live in Austin, Texas but I'm from the SF bay area. I've been programming since ... I'm not quite sure. I found this workbook from the 80s for learning BASIC that I filled out when I was about 8 or 9: 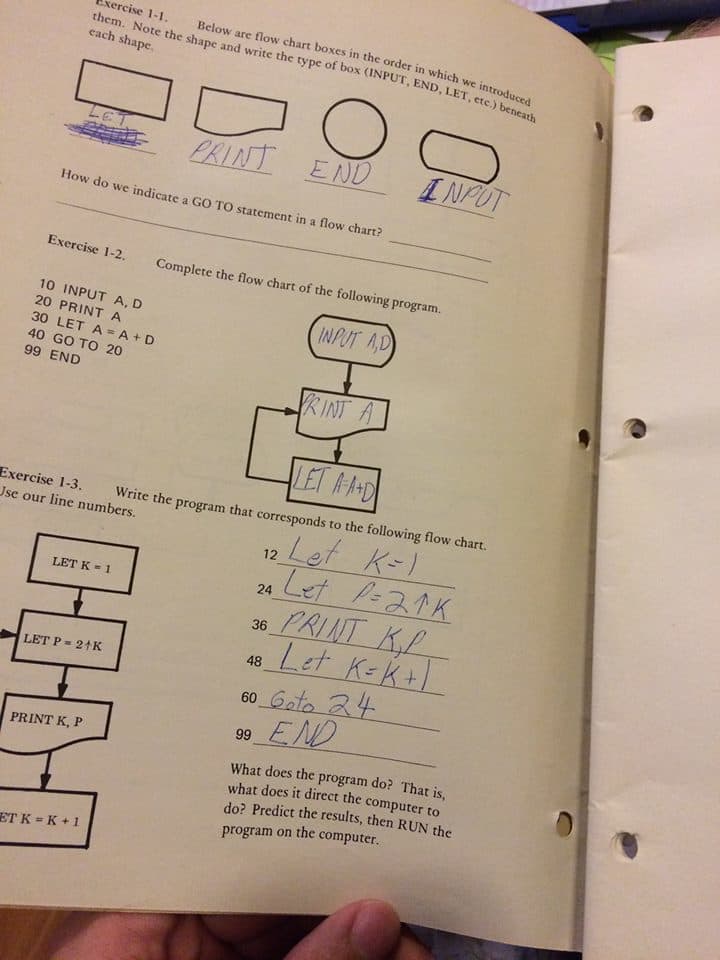 I started programming "professionally" when I was 14 in 1999, working for my dad's web hosting company that he started in 1994. Until then I really only knew various forms of BASIC and Visual Basic. Soon I picked up PHP. I started doing side projects for my dad, and even found some kids at my high school to work on projects with. Not many though.

Things started to take off when I found some local LAN parties. They were full of tech savvy kids like me, though a little older. Some were even into programming PHP.

I started holding my own LAN parties, except focusing on programming and making stuff. After one or two of those, I started a bigger version of that with those friends called SuperHappyDevHouse. Actually this is really where things took off. Over the next 5 years we held over 50 of them, usually to crowds of 100-400 people. This is a whole story on its own, but among other things, these events directly inspired the internal hackathons at Facebook.

Being a creator and organizer of one of the most popular underground Silicon Valley tech events gave me quite a network, so it became very easy to find freelance work. More importantly, SuperHappyDevHouse was my equivalent to university. I can't even explain how magical it was. All the things you could learn and explore there, and with amazing people.

Not to discount all the other awesome people that attended, but you had computing visionaries like Doug Engelbart show up, "famous" entrepreneurs of the time like Kevin Rose, and engineers from all the hot startups. Cal Henderson would show off the influential work he was doing behind the scenes at Flickr that would help kickoff what became DevOps. Brad Neuberg would come, telling us about this idea of coworking. He and Chris Messina, "father of the hashtag", and other DevHouse regulars spawned the coworking movement. So many other stories. The Twitter engineers, when there was just a handful of them, would come and listen to my first lighting talk on webhooks.

Oh, I coined and evangelized webhooks. Fun story, maybe for another time. Related to that were some projects that have sort of faded into oblivion like the original Localtunnel, RequestBin, and PubSubHubbub. And a bunch of unreleased projects that I've started to come back around to now.

Somewhere in there I went from PHP to Ruby. I'll admit it had something to do with Ruby on Rails. But eventually I came around to Python, which I stuck around with for quite a while.

A bunch of us DevHousers ended up working at NASA Ames, which evolved into a project called NASA Nebula. This became the compute side of a partnership with Rackspace that turned into OpenStack.

That was pretty cool. So then I decided to try full-time employment. But where would I work? I posted to Twitter saying I was looking for my "dream job". Twilio CEO Jeff Lawson responded. They were also only a handful of people at the time, so that made me an early engineer. I recently reflected on my 2 year stint at Twilio, not surprisingly because of their IPO.

By the end of Twilio I was getting curious about Go because I'd gone from Twisted Python to Eventlet to Gevent and I was really excited by what Go had to offer for somebody like me. Which, I guess, I was more of a systems programmer by then.

I had also started prototyping a higher-level container engine, but after leaving Twilio I put that on pause. Until a few months later when I ran into Solomon Hykes and he said they had a shelved container engine prototype. So I started working on Docker with them. Eventually they pivoted the company to it and I didn't want to do full-time again, so I did some other projects.

This starts getting into my whole ideal infrastructure vision, which I won't get into here, but it was part of my involvement in Flynn, and before that a project called Dokku. Dokku was quite a hit as it was the first killer app for Docker. Before most even knew what Docker was, Dokku gave you a single host Heroku that was extremely hackable and extensible. It was originally only 100 lines of Bash.

At this point, I was pretty into Go and pretty consumed by the cloud infrastructure mini-revolution happening because of Docker. I decided to start a consultancy with a friend from the LAN party days. We called it Glider Labs.

With Glider Labs we helped a lot of companies deploy Docker in production by filling out a lot of the rest of the missing pieces with extremely simple, robust building blocks. Some of these are still very popular in the Docker world like Registrator and Logspout. We also discovered Alpine Linux and brought that into the Docker ecosystem.

This was all fine except I had an increasingly vivid vision of the future, but it was constantly thwarted by VC funded startups that in so many words were doing it wrong. It was also a struggle to build open source and do consulting. Eventually my partner left.

I took a break to re-evaluate what I wanted to do. I started working on games and music again. Yeah, I'd been working on games since high school. Around the time SuperHappyDevHouse started, I met Derek Yu and we ran TIGSource together. As a result, I put up the forums that Minecraft and maaaaaany other indie games came from. I was keeping one foot in the game world, specifically this new generation of indie games, attending GDC every year, and running game jams like TIGJam. I was even Executive Producer for Indie Game: The Movie. ;)

My break ended about 18 months ago. After the Twilio IPO I did decide to keep going with Glider Labs, but to reboot it. I had this vague idea that I tried putting a name to called Megalith, and I've been continuing on that path through Glider Labs. I'll have to get into that in another post, but in short I'm writing a lot of open source building blocks in Go.

Meanwhile, I've been occasionally producing music and trying to finish my first album. I should note, that album project was supposed to take 2 months, but it's been over a year. Luckily I'm close to a demo release.

ALSO, I'm working on games. Just the other day I finished the beta of my first complete game project.

So that's me. I'm hoping to use this site to journal about my work, ask for help, share ideas, etc. This seems like a good place I can get into some of the nitty gritty details of my software work.

I built a "guess the sound" quiz in one day, and 5 lessons I learned doing it

Reset All Comment Positions in Excel Office 365!! – {with Example}