React Hooks have been available for use since the React 16.8 release. We'll learn how we can start applying these Hooks by using our KendoReact components.

With the release of Hooks, building applications in React and managing the local state of its components is now easier, more straightforward and concise. There is a lot to know about Hooks from a conceptual standpoint, and we have many articles here on the Progress Telerik blog to help you get acquainted with them - I've highlighted a few of them below. In this post, we'll learn about Hooks and how to apply them using KendoReact components.

Building React applications has not always been a breeze - before Hooks there was a lot you had to know about several patterns and practices in React just to do everyday things like state management, separating logic within your components, ensuring that you could share lifecycle methods and such across components, etc. It required understanding about several different techniques like Mixins, Higher Order Components, and or Render Props, something typically only done with classes.

Before Hooks React developers, when faced with ever growing state concerns, would reach for Redux or MobX to manage their data and communication state. This was a natural use for Redux, but there are other forms of application state that using Redux might not be as good of a choice for, like the state inside of class-based components that would use this.state and setState. setState is a method provided in React allowing the user to define and change state over time. This capability used to only be available in class components, until Hooks.

Below are some articles on our blog explaining Hooks in more detail:

The ReactJS.org documentation on Hooks is also a great resource that you should know about.

As I stated before, Hooks are great for dealing with certain types of application state. A few examples are control state, local component state and session state. I'd like to leverage Hooks when working with our KendoReact components, but I want to start simple. Let's refactor one of the StackBlitz demos from a demo that uses classes and switch it to using functional components instead.

We will look for instances where the demo is using this.state and this.setState, because when we convert the component to functional we will not have to use the this keyword anymore, and we will not need to use a constructor or call setState. When we work with Hooks, we do things slightly differently. So let's get into refactoring the KendoReact demo that shows how to work with our KendoReact Dialog. I have forked the original StackBlitz demo from the Dialog Overview page, that will be our starting point.

If you look at this demo's main.jsx page which I have shown below, there are several target areas we can identify that will change when using a functional component and React Hooks. The code and lines highlighted in GREEN will need modification, and the lines highlighted in RED will be able to be removed completely. 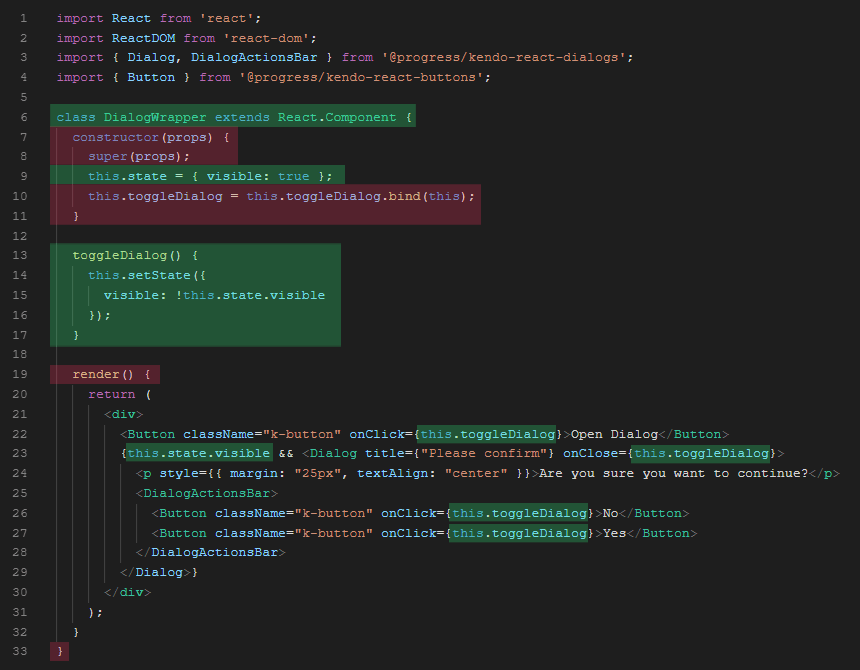 Let's get started. The first thing we need to do is to convert the class to a functional component, remove the constructor and call to super(), the binding of the toggleDialog() function. There are multiple syntax options we could use here - I prefer the ES6 Arrow Function style:

In our component line 5 would now look like this:

Let's go ahead and set up our hook that will take the place of the state object. Instead of creating an object named state, we will set up a call to useState() and destructure its return value into a variable that will hold our state and an update/set method to update that piece of state. Our name of our state will be visible and its update method will be called setVisible. We will basically remove the entire constructor and replace it with this one line:

Since we are using the useState() basic hook, we also need to import it. Our React import will now look like:

Next, we need a function inside this component that will deal with calling setVisible for the purposes of toggling its value. We decided that we would name it toggleVisible instead of toggleDialog and since we are in a functional component, the syntax that was used before will not work. For this reason, I will update it to the ES6 Arrow Function style.

This function will simply set the visible state to the opposite of its current state at the time. Behind the scenes React is managing this visible variable in a similar way as it would if you were calling setState in a class component. That management is just being abstracted by something behind the scenes called useReducer but we are not going to get into exactly how all of that works in this simple example. Our new code looks like the following:

Now we need to get rid of the render() block and its two curly braces. Also, we need to remove all references to this this.toggleDialog and this.state.visible and change them to toggleVisible and visible accordingly. Now inside of our return() we will have the following changes:

Again we have just updated our code in the return() to not reference the this keyword and to use our new function name toggleVisible.

These are all the changes that need to be made. We have successfully converted our KendoReact demo to use a functional component and the basic useState hook. Let's take a look at what our overall changes looked like using and awesome tool called GitHistory:

What I have done here is downloaded the original StackBlitz class based demo into its own Git repo. The class-based version would be the initial commit and then I made a second commit after refactoring to the functional hook style that we made. GitHistory gives me the ability to scrub through those commits and see in an animated way how our main.jsx file has changed over those two commits. I think it's a powerful visual for someone learning how to use Hooks and seeing the change from the old class-based approach to the function based approach.

I have also pushed this repo to my GitHub account where you can view it with GitHistory on your own. GitHistory (created by Rodrigo Pombo) is a very cool plugin that allows you to diff any file in your repo and scrub through the commits and see how over time the file has changed in a very visual way.

This is a great place to stop. We learned what it takes to convert a class component with a simple state object into a functional component using a hook. In the next part of this blog series, we will take a deeper dive into setting up several KendoReact components which have more basic Hooks, plus some advanced Hooks like useReducer, and take our Hooks skills a little further.