Object-oriented Programming (OOP) is a programming paradigm solemnly based on the concepts of Objects and Classes. It allows the group or collection of related objects in a class and create functionalities for use by the class with the help of methods.
Object-oriented programming has four pillars or principles known as:

These four principles qualifies a language to be called Object-oriented. In this tutorial, we will be briefly looking at Inheritance.

This article explains the concept of inheritance using Java programming language. Therefore the audience is expected to have a basic knowledge of the following in Java:

If you are new to Java or have a rusty knowledge in it, you can do well to check out Hello World Breakdown in Java where we walk through the building blocks of a simple Java program.

Inheritance is one of the four pillars of Object-oriented Programming paradigm. Inheritance is a concept that allows new classes to be created from an existing class by acquiring or inheriting the properties of that class and possibly add more functionality to the new class. Take for example a family hierarchy, in most cases the children exhibit some of the characteristics of either the mother or the father. Some of these characteristics might include

In this case we can safely say that the child inherits those characteristics from the parent since those characteristics can be found in the parent. In some cases, the child might have not only the characteristics of the parent, but the grandparents and so. In other cases, the child might display the characteristics of both the parent and grandparent and still display their own personal attributes which makes the child unique. This is the basic concept of inheritance in OOP. Inheritance allow us to derive a new class from an existing class. The existing class which the new classes can be derived from is called the superclass in Java. It is also known as the base class or parent class in some other languages like C++. While the new class that is derived is called the subclass in Java. It is also known as derived or child class in some other object-oriented languages as well.

Some of the advantages inheritance provides are:

In this article, we will be considering the Student class to explain the concept of inheritance. Below is an image that shows some of the classes that can be derived from Student class and their hierarchical relationship. 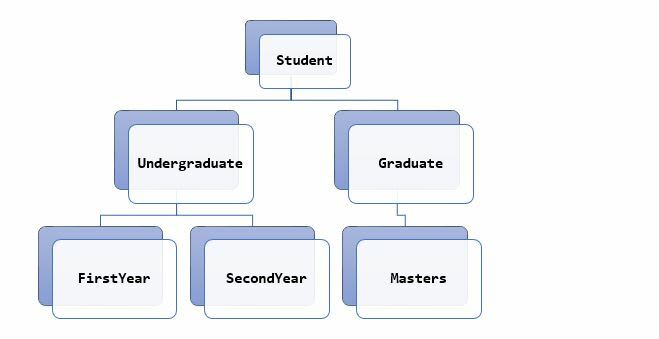 Student.java first start by declaring and initializing its instance private instance fields. Recall that any field or member declared as private is only accessible to the class alone, so therefore the instance fields declared in the Student class can’t be accessed outside the class. This is where the set and get methods come to help. In this case, the set methods first validate the values entered before making it available to the class for use and throws an error with a meaningful message to the user. This means that any class extending the Student class needs not to validate its first name, last name and student id anymore because the Student class has already handled that. This is one of the advantage inheritance provides. It prevents programmers from reinventing the wheel. This speed up production and also reduces the complexity of a program since some implementations are done in the superclass.
The toString() method at the end also shows that Student class is overriding one of its superclass method using the @Override annotation. Recall that every class in Java by default and directly or indirectly extends the Object superclass, so we don’t have to explicitly extend the Object class at the Student class declaration. This also shows that subclasses can modify or increase the capabilities of the superclass members by simply overriding them in the subclass.

The next program containing the Undergraduate class inherits the properties of the Student class.

Undegraduate.java first starts off at the class declaration by extending or inheriting from the Student class using the extends keyword. extends is a keyword in Java used implement inheritance and it can only extend one class since Java only supports single inheritance.
The program continued by declaring an instance field and then declaring the constructor with parameters. Then next to the initializing the superclass variable using the super keyword, immediately followed by set of parentheses consisting of the superclass constructor arguments. super is also a keyword in Java and it is used by subclasses to initialize the variables of the superclass constructor. Java requires that the first task of any subclass constructor is to call the constructor of its direct superclass.
Over here, the firstName, lastName and studentId needs not to be validated anymore because superclass has handled that already and they can be accessed using the super. followed by their get methods. Similar to the Student class, Undergraduate class also has its own toString() method which uses super.toString() to access the direct superclass String representation. Members of superclass can be accessed using the super. followed by the member to access.

Class StudentTest creates objects of both the Undergraduate and Graduate class and passing the constructor values as well. It then proceeds to printing the values of the objects created. Notice that the toString() method was not explicitly used here to print the String representation of the objects. This is because they have already been customized from the Undergraduate and Graduate class respectively.

Below is the output of executing StudentTest.java

Inheritance is a broad topic in Java and other object-oriented programming languages as well. This article implemented the concept of inheritance using the Student class with Graduate and Undergraduate class as subclasses. We learned about the concept of superclass and subclass and its usage in inheritance. Similarly, we used some keywords such as extends, super as well as using the @override annotation to add functionalities to the default toString method of every class. We now moved to using the set and get methods to access the private field of a superclass as well as validating the values before setting them.
In the next article, we will be building upon the concept of inheritance by introducing Polymorphism - the ability of objects to exists in many form, which is also a core principle of object-oriented programming. Stay tuned!

Java: Convert String to a Number