In the previous article on Memory management using smart pointers (Part 1), we saw that unique_ptr implements unique ownership - only one smart pointer owns the object at a time. But there might be scenarios where you might need to create multiple pointers of the same object and share them; in that case we should use shared pointer(std::shared_ptr). One such scenario could be - using smart pointers for multithreading; sharing a pointers between threads helps to keep the smart pointer alive within threads when other thread using the same smart pointer goes out of scope (i.e, more than one owner manages the lifetime of the object in memory).

std::shared_ptr is a smart pointer that retains shared ownership of an object through a pointer. The same object may be owned by multiple shared_ptr objects. The object is destroyed and its memory deallocated when either of the following happens: 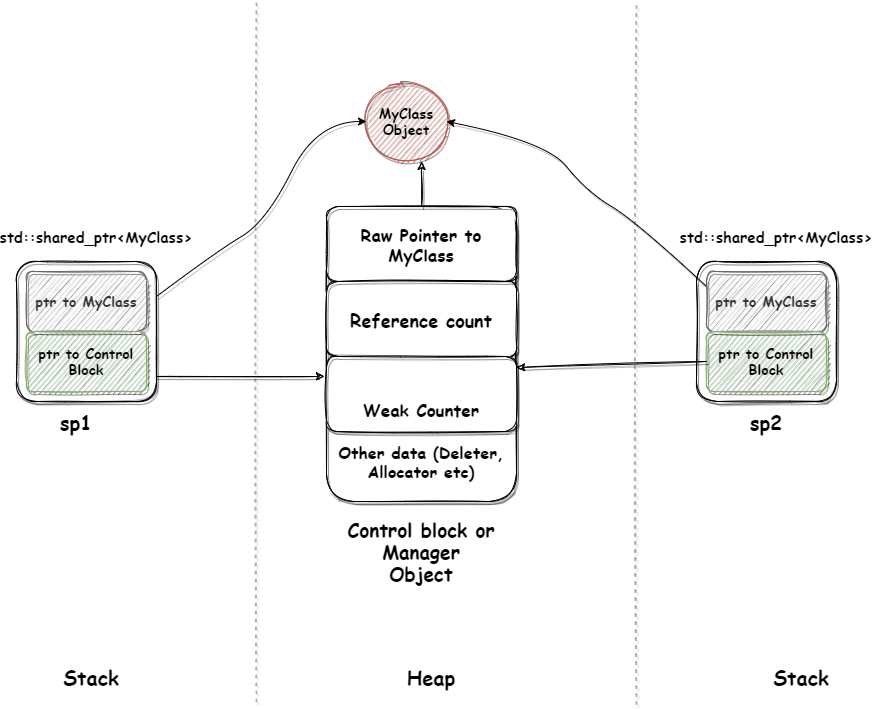 Of course the fix for the issue is doing the binding at run time polymorphically (dynamic binding) i.e, using virtual destructor in the base class, which prints

If we use shared_ptr we may not need virtual destructor since the smart pointer will take care of it for us. Changing the above code with shared_ptr

In the above code, despite the destructor not being virtual, the correct derived class (Derived) destructor is invoked when the base class (Base) shared_ptr goes out of scope or reset. This works because the manager object (control block) is destroying the object through Derived* deleter and not through the raw pointer Base*. However, the destructor should be declared virtual in the base class to make it operate polymorphically; the above example is just to show how shared_ptr works.

NOTE: unique_ptr<Base> base(new Derived) do not provide this feature because with unique_ptr deleter function is part of the type and there is no concept of control block or manager object.

To use shared_ptrlike a raw pointer the arrow operator(->) and dereferencing (*) operator are overloaded.

You can call a reset() member function, which will decrement the reference count and delete the pointed-to object if appropriate, and result in an empty shared_ptr that is just like a default-constructed one. You can also reset a shared_ptr by assigning it the value nullptr.

Below is a code sketch to illustrate the basic usage

Having two classes one that inherits from another, when trying to assign a smart pointer variable of the derived class to a smart pointer variable of the base class it is required to use std::static_pointer_cast in place of the normal static_cast (used with raw pointers). It will be useful to remove the suggestion to use the static_cast and include the suggestion to use the std::static_pointer_cast.

Using make_shared also avoids explicit use of new, promoted in the slogan "no naked new!". Because only a single memory allocation is involved when you use make_shared to initialize a shared_ptr, you can expect improved performance over the separate allocation approach.

Getting std::shared_ptr from this Object

From performance perspective taking shared_ptr by copy or by reference make significant difference.

NOTE: The best practice in C++ is always to have clearly defined ownership semantics for your objects. The pass by reference of the smart pointer defy this rule; Hence, copy the shared pointer when a new function or object needs to share ownership of the pointee.

The problem with shared_ptr is that if there is a ring, or cycle of an objects that have shared_ptr to each other, they keep each other alive - they won't get deleted as they are holding each other (i.e, still has a shared_ptr pointing to them) leading to memory leak. 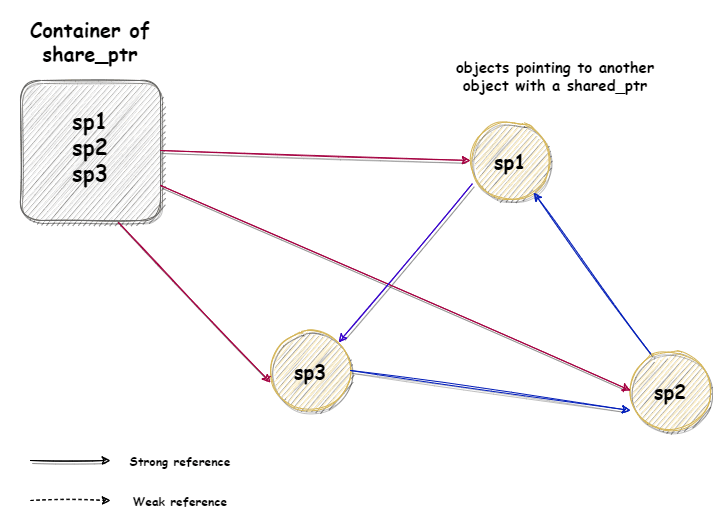 Lets look at an example that causes cyclic reference problem

In this example the instances a and b are only used in the useClassAnClassB() function so we would like them to be destroyed when the function ends but as we can see when we run the program the destructors are not called.

The memory leak summary is as shown below.

C++11 includes a solution: weak smart pointers: these only observe an object but do not influence its lifetime.

A ring of objects can point to each other with weak_ptrs, which point to the managed object but do not keep it in existence. This is shown in the diagram below, where the "observing" relations are shown by the dotted arrows. 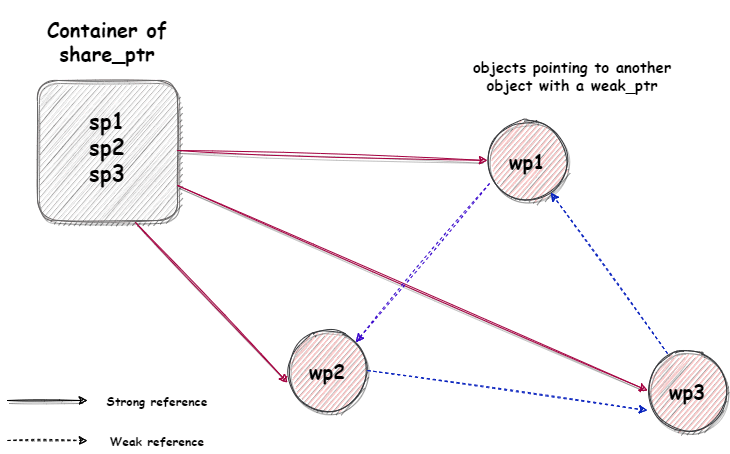 If the shared pointer container is emptied, the three objects in the ring are automatically deleted because no other shared pointers point to them; weak pointers, like raw pointers, do not keep the pointed-to object "alive" and hence cycle problem has been resolved.

Solution to the problem
The solution to the cyclic reference problem example is to decide who owns who. Lets say MyClassA owns MyClassB but MyClassB does not own MyClassA then we replace the reference to MyClassA in MyClassB with a weak_ptr like

Then if we run the program we see that a and b are destroyed as we expect. And memory leak summary (for the above code) below shows that, no memory is leaked and the objects are destroyed gracefully.

The definition of weak_ptr is designed to make it relatively foolproof, so as a result there is very little you can do directly with a weak_ptr. For instance, you can't dereference it; neither operator* nor operator-> is defined for a weak_ptr, you can not get pointer to an object - there is no get() function.

During initialization, the weak_ptr is constructed as empty; the weak_ptr object can only be initialized by copy or assignment from the shared_ptr or an existing weak_ptr to the object.

You can not refer to an object directly using weak_ptr; you have to get a shared_ptr from it with lock() member function.

ask the weak_ptr if it has expired

How to Write a C++ Library

Once suspended, pratikparvati will not be able to comment or publish posts until their suspension is removed.

Once unsuspended, pratikparvati will be able to comment and publish posts again.

Once unpublished, all posts by pratikparvati will become hidden and only accessible to themselves.

If pratikparvati is not suspended, they can still re-publish their posts from their dashboard.

Once unpublished, this post will become invisible to the public and only accessible to Pratik Parvati.

Thanks for keeping DEV Community 👩‍💻👨‍💻 safe. Here is what you can do to flag pratikparvati:

Unflagging pratikparvati will restore default visibility to their posts.