TL;DR I've built a priority event list and an assessment logic and now we need to also report back and use that feedback for extended assessment. Here's what I want to come up with, a trip report database connected to our events database, a collection mechanism as well as a standardised assessment. You can build something like that yourself. Here's the scaffold.

Why would I want a trip reports system?

What tools should I use?

You could just use about anything. An Excel list, Notion, SQL Server, Salesforce. Whatever.
The simplest and most automate-able approach for us was to use AirTable and its native forms for collecting the data. That's mainly because we already have our priority event list on AirTable, and we also automated quite a bit through AirTable's great API and Postman Monitors. We can access and modify any data in our "Base" and also use things like webhooks. And when the tools in our belt don't suffice, there's always Zapier, like in this example, where I built a Slack bot that is looking up events in AirTable through comparing URLs.
When you use AirTable's forms, you can look up entries in the same base, e.g. a person can select themselves from a roster, so the newly created entry is directly matched to a unique person. Same is true for the events, the trip report shall belong to. That's somethign that I wasn't yet able to realise with other survey tools like TypeForm. I like the flow and optics of TypeForm much more than the AirTable forms, but when it comes to functionality, pun is intended, form follows function. 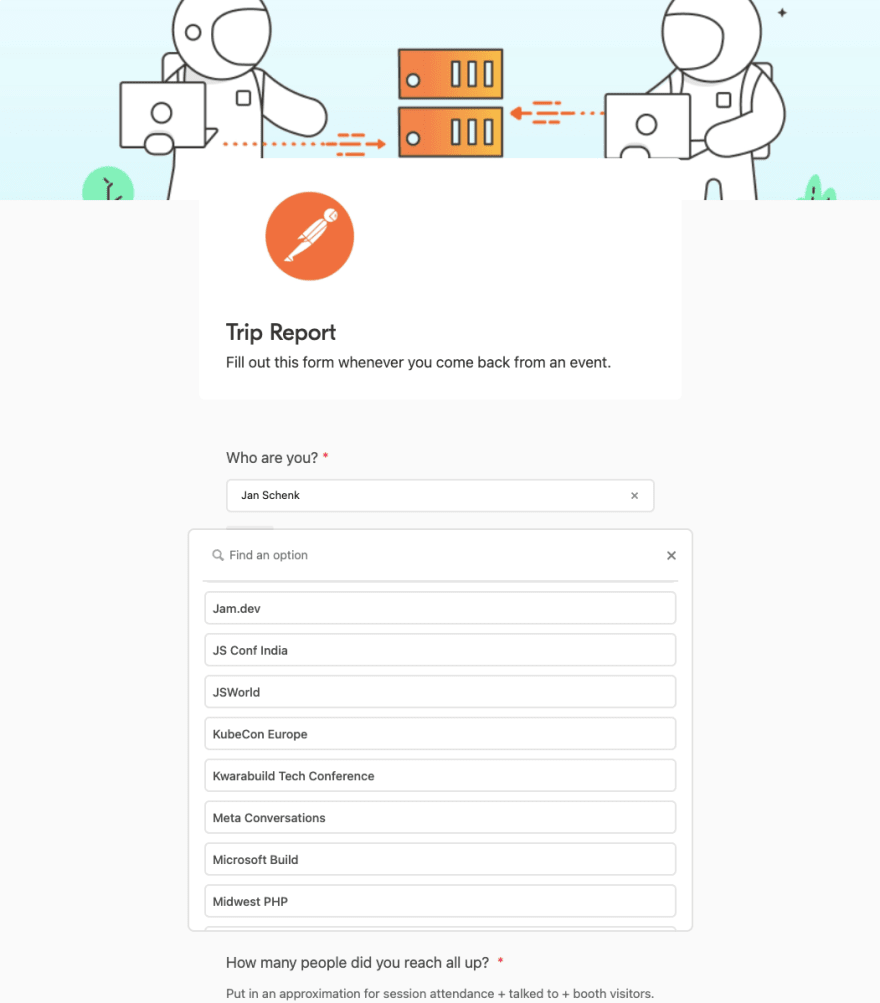 What feedback should I gather?

Initially I thought this would only be for developer advocates, as they are the ones that go to conferences, speak there, interact with attendees and staff a booth. But after some social surveying on Twitter I realised this should be more wholesome.

Hey peeps
I'm setting up a trip report structure for DevRel at @getpostman. Whats stuff that you report back to the team from events (digital, in-person, hybrid)?
Also thinking about putting it into words for @ThePracticalDev. So pls like if you think you would read it.

People mostly commented that we need more than numbers, "it was 3/5 on site" would just not suffice. They also mentioned that for making a recommendation for next year, we should also note down how the collaboration with the organisers went.

I knew this would be a compromise. We want feedback as unbiased as possible, in a standard rating scheme, involving as many voices from as many roles as possible, AND also hear individual opinions in a free-form text? Not to mention it shouldn't be bloated as nobody likes filling out surveys. Oof.

Here's the fields that we currently collect. Not all of them need to be filled by every reportee (e.g. Budget Committed or Registrants). Then some of us like to write a wrap-up on our wiki as well.

For making educated decisions about re-engaging on an event the next time, we need to transform these answers into numbers. Or one number (a score) and an average of Yes/No (a recommendation). Let's do this on AirTable, here's a stripped down example how you could create this score for the trip report entry:

This is copy/paste/delete-some, so expect this code to not run as-is. It should just demonstrate what we're doing to get to comparable numbers.

Once you have this score from a number of trip reports, you can calculate an average or median to feed back into your main event database. Et voila, having this generated assessment on the main entry, it can go into decision making through MOAR AUTOMATIONS!

Stay safe, folks, and let me know what you do for automations in the comments below. <3

How To Have More Free Time with Remote Work?

The Dangers of Shipping at All Costs w/ CEO & Cofounder of 33 Teams, Drew McManus

Once suspended, postman will not be able to comment or publish posts until their suspension is removed.

Once unsuspended, postman will be able to comment and publish posts again.

Once unpublished, all posts by postman will become hidden and only accessible to themselves.

If postman is not suspended, they can still re-publish their posts from their dashboard.

Once unpublished, this post will become invisible to the public and only accessible to Jan Schenk (he/him).

Thanks for keeping DEV Community safe. Here is what you can do to flag postman:

Unflagging postman will restore default visibility to their posts.