Do you like to cook? I’m not sure about you, but I enjoy cooking. I usually cook by myself, although I’m not opposed to having some help.

Many times you’ll find yourself in a situation where you will need something in the middle of cooking and that damn thing isn’t in your house and you have to ask someone to get it for you while you’re cooking. In the meantime, you keep doing your job!

You may be familiar with this way of doing things — in programming languages — we refer to it as asynchronous.

In JavaScript, we rely a lot on asynchronous operations — whose results we don’t have yet but will at some later point.

A promise is an object — a placeholder for the eventual result.

It is not that we could not do the async operation before. We did!

All we had to do is to make use of Callbacks in a certain way! Doing so was a torture when we needed to do a task when our operation failed.

Promises standardized the way to deal with asynchronous events *and *callbacks.

I’ve seen people struggling with promises. This post aims to assist individuals in comprehending this amazing topic. We will endeavour to gain a proper mental model of promises through real-life examples.

Let us understand promises with this little story 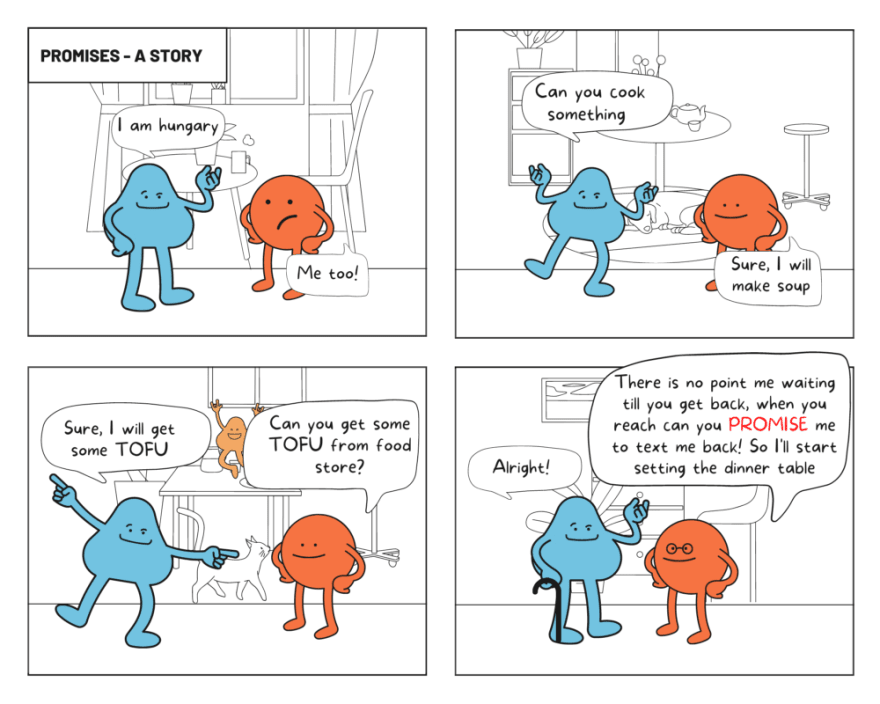 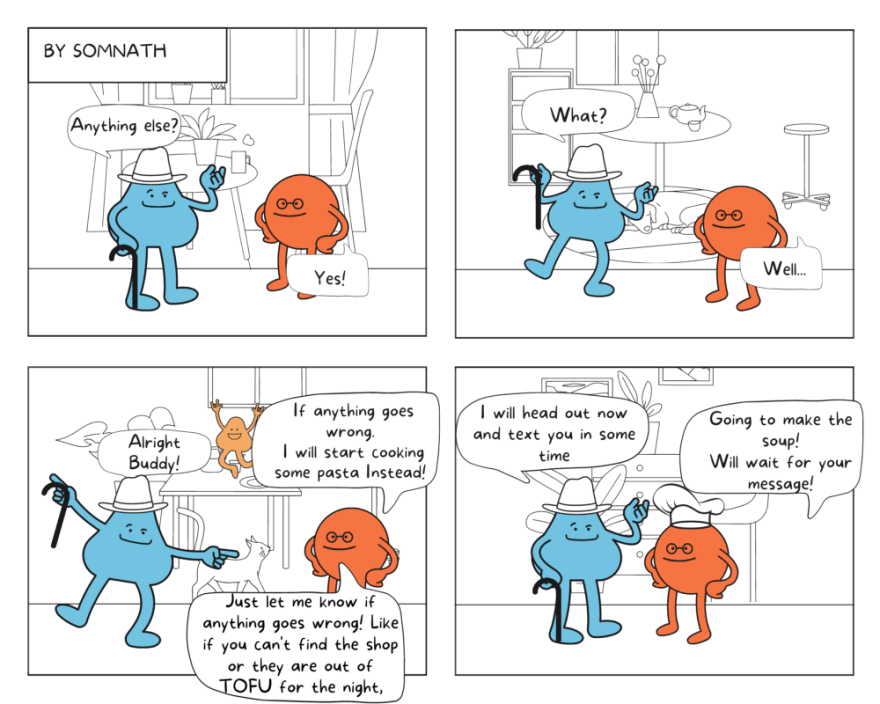 I am not yet a master storyteller! However, the preceding scenario contains all of the necessary information to help you comprehend the concepts of Promises.

Let us take the key points from it and apply them to JavaScript World.

We need a standard description of what a Promise is — nothing better than MDN.

Let us see, how this definition relates to our story. 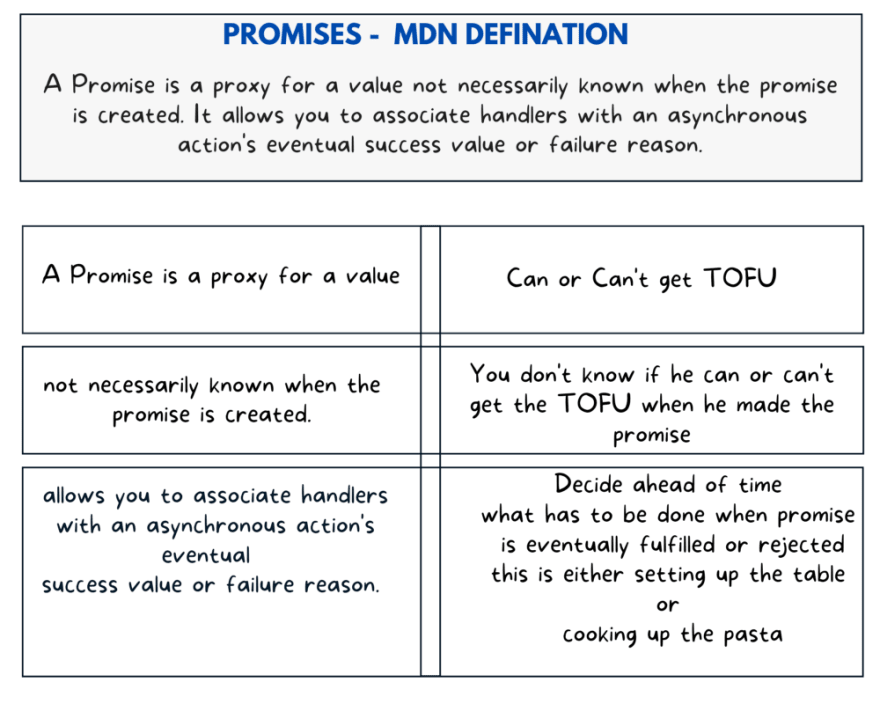 In JavaScript, a Promise is just an object. It is a placeholder for a value we do not have right now but will have later. It ensures that we will eventually know the result of an asynchronous operation.

A promise is nothing more than an object, and it is usual for objects to retain a state. By modifying the state, we do many complex tasks in programming.

A promise is always in one of the three states: 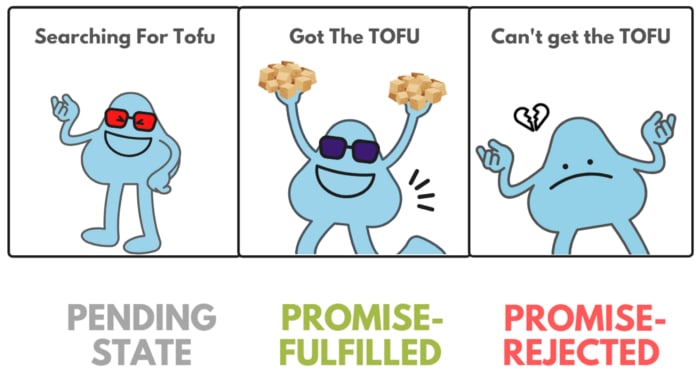 Let us establish a strong mental model by tying the underlying principles to our tale before diving into the code. 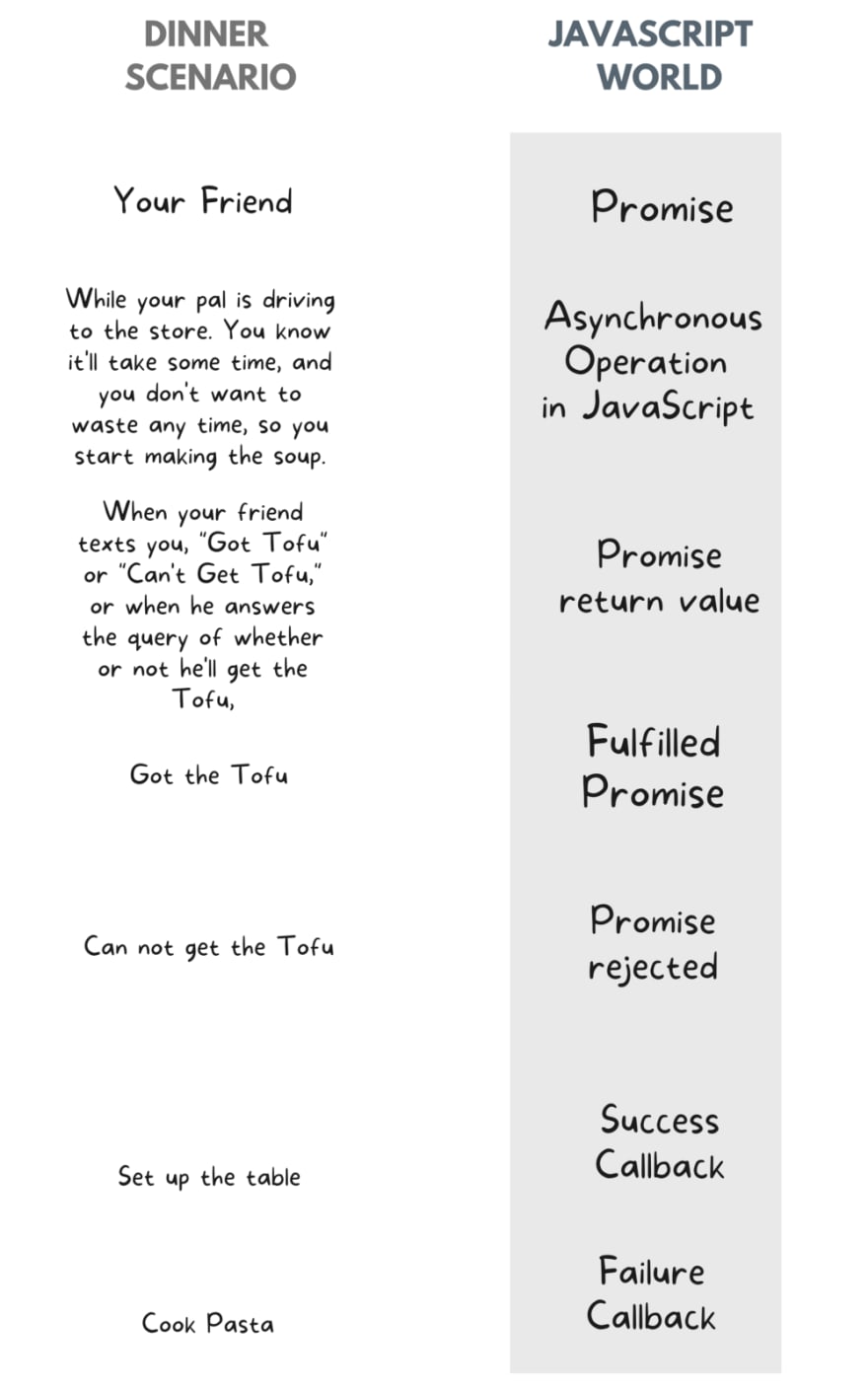 How to work with promises?

If we want to use promise in our code, then we must first understand these three fundamental concepts.

“It is not the answer that enlightens, but the question.”

If you understand these three things, dealing with promises will be a breeze. 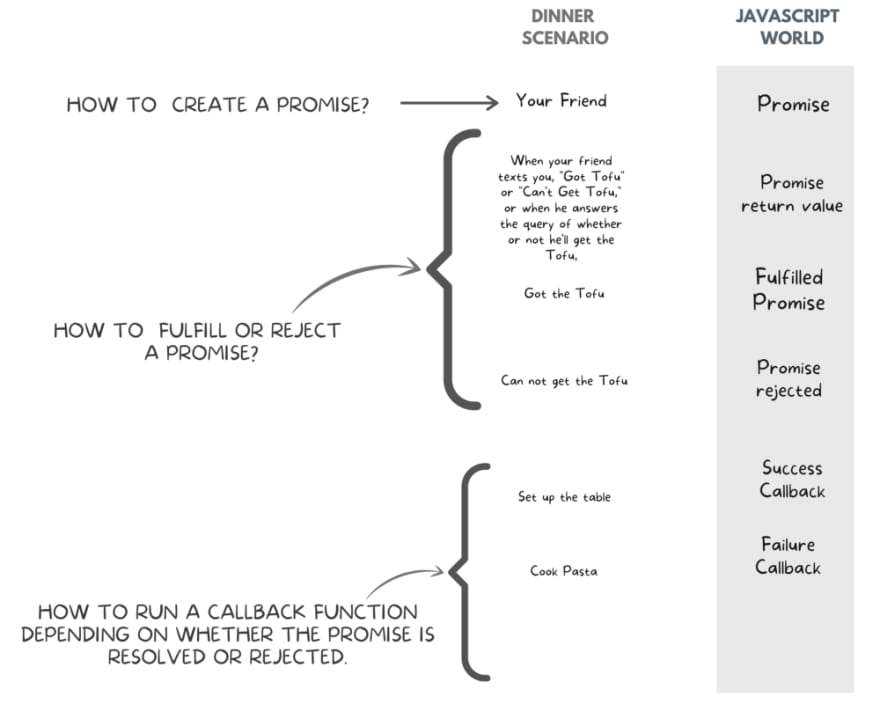 Let’s take a look at each one individually.

How to create a Promise*?*

We create an instance of a promise using the new keyword with the promise constructor function.

How to fulfill or reject the promise?

The promise constructor function accepts one function as its argument — let us pass in an arrow function (but we could just as easily use a function expression).

This function is called an executor function, it automatically receives two arguments resolve and reject.

Keep in mind — resolve and reject both are functions.

It is important to keep in mind you cannot directly mutate the status of a promise — you can call the resolve function to fulfill the promise or the reject function to reject the promise. 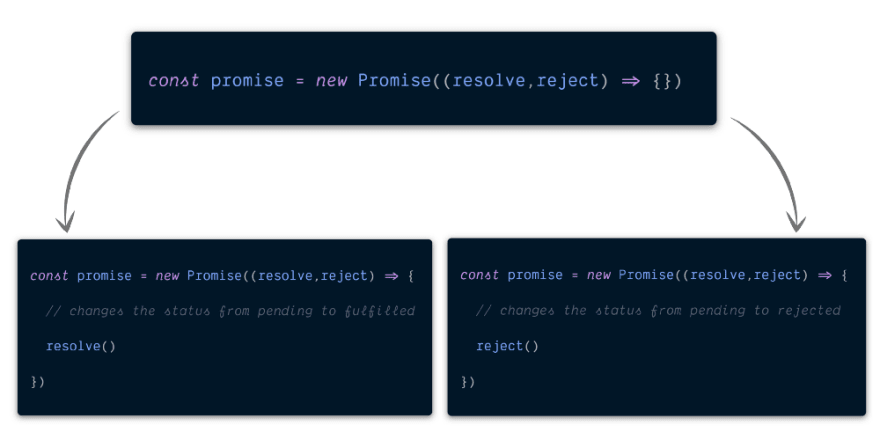 Both these functions are typically called after an async operation.

To keep things simple, let’s use setTimeout() to simulate the time it takes to search for the Tofu. We’ll assume that it takes your pal five minutes to go out and text you back.

We refactored our code to include the setTimeout function.

This is pretty much how you fulfill or reject a promise.

How to Run a Callback Function — Depending on Whether the Promise Is Resolved or Rejected.

Callback function means that we will use that function as an argument to another function. 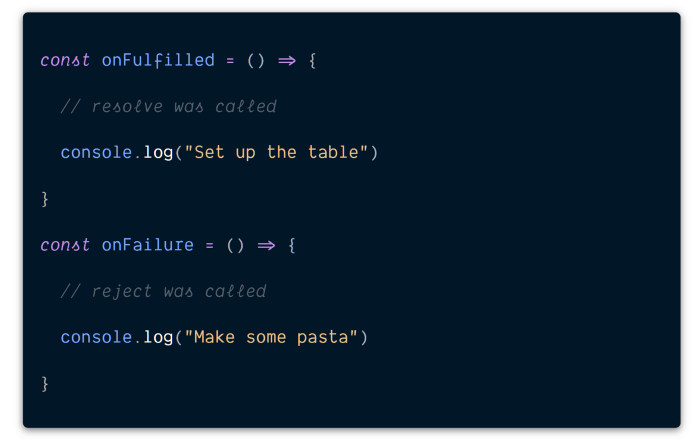 onFailure()is the function to be called if reject is called after the async operation.

Ideally, there would be more code in your callback functions but we simply log into the console and it serves the purpose. 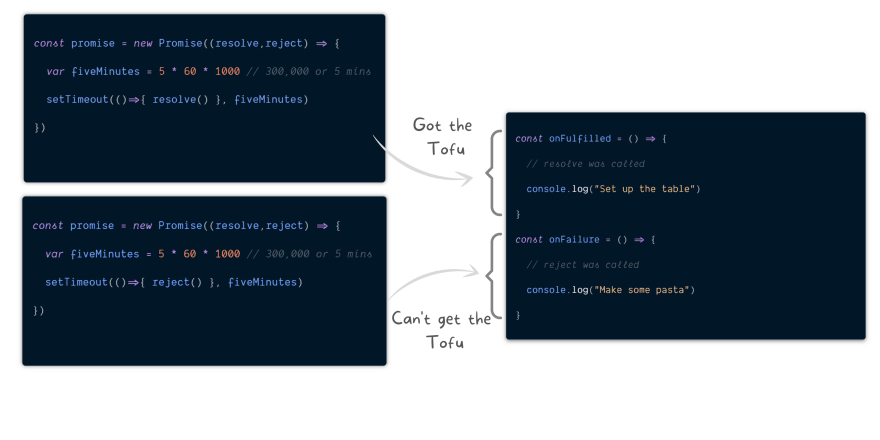 You may be wondering how to make use of these two callback functions?

The important bit here is:

In our case, we need to pass

Both functions are callback functions since they are supplied as arguments to other functions. I’m reminding you of this repeatedly since I’ve seen many individuals get afraid of the term “callback” — there is nothing to fear — they are just regular functions. 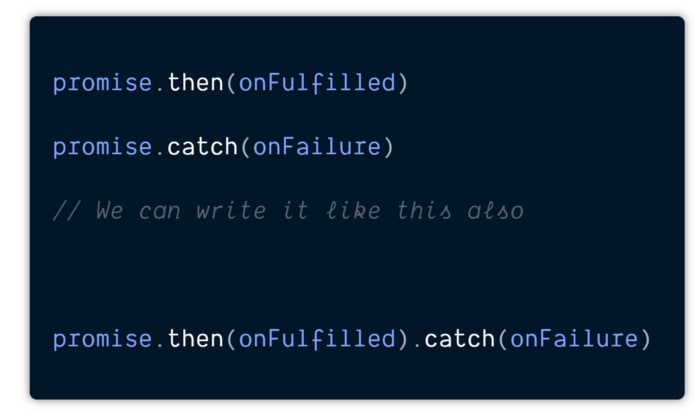 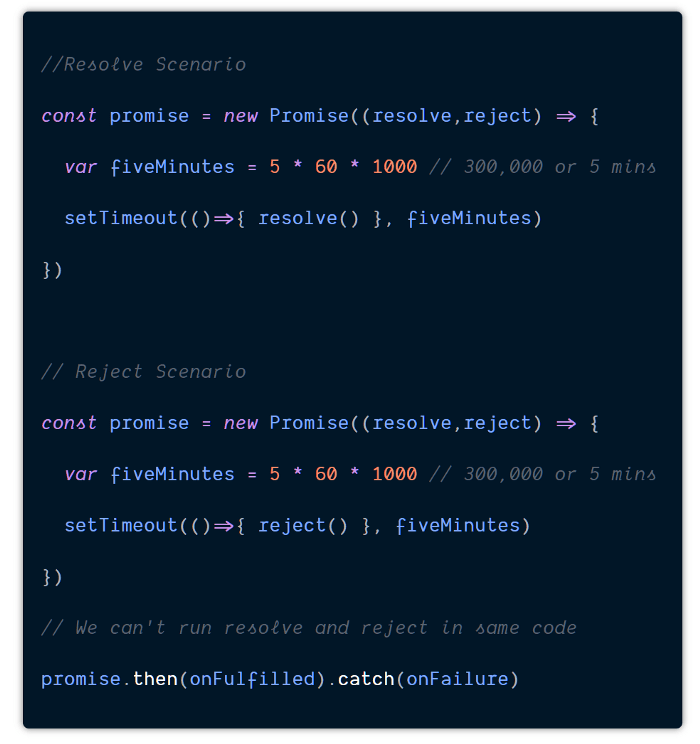 Our promise code works as expected. But there is room for improvement!

What if we want to send out some data when resolving or rejecting a promise?

That way inside our callback functions we can make use of the value to do something else.

Well, it turns out that we can do that by passing an argument to resolve or reject, 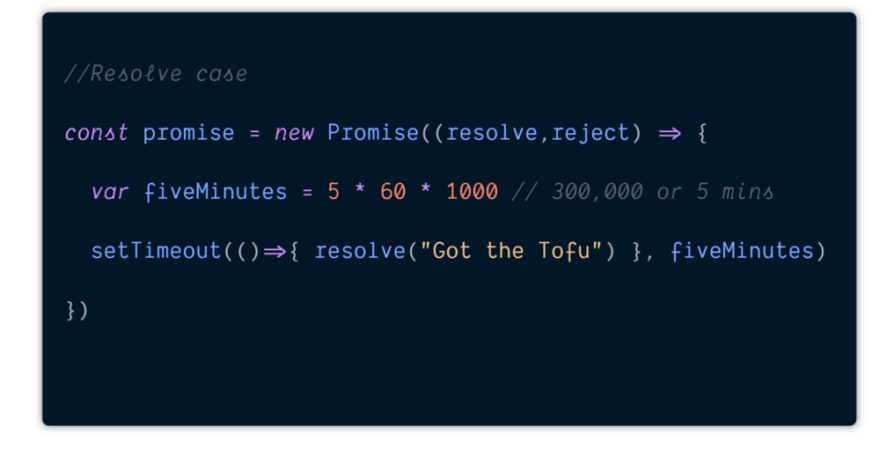 But how do we access these strings in our callback function?

You can see that I’ve included parameters to both these callbacks and simply log them to the console.

We would now see the output Got the Tofu Set up the table when the promise is fulfilled or if there is an error and hence a rejection we would see Can't get Tofu Cook pasta. 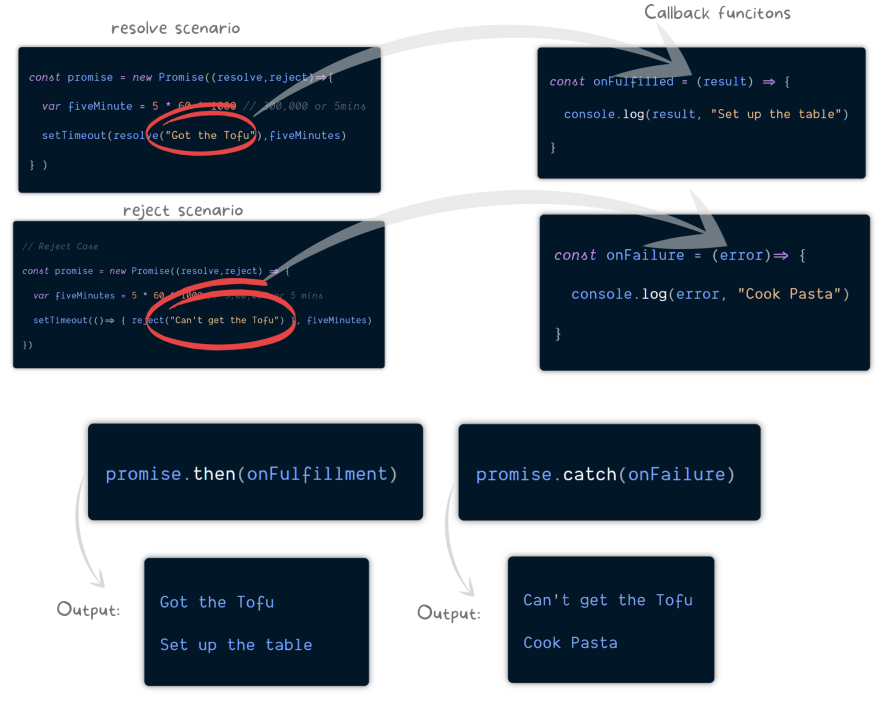 One great example of using promises is fetching data from a server; we promise that we’ll eventually get the data, but there’s always a chance that problems will occur.

In a practical scenario, things will be different.

Your result would be:

Essentially this is pretty much is the fundamentals of promises in JavaScript. There are a few more details which we will understand in the next article.

“A promise means everything, but once it gets broken, sorry means nothing”

Thank you for being here! I would not be able to do what I do withoutpeople like youwho follow along and take that leap of faith to read my post.

I hope you’ll join me in my future blog post and stick around because I think we have something great here. And I hope that I will be able to help you along in your career for many more years to come!

6 Awesome Nocode Backend Tools You Must Know 👨‍💻 A Thread 🧵

Once suspended, polymathsomnath will not be able to comment or publish posts until their suspension is removed.

Once unsuspended, polymathsomnath will be able to comment and publish posts again.

Once unpublished, all posts by polymathsomnath will become hidden and only accessible to themselves.

If polymathsomnath is not suspended, they can still re-publish their posts from their dashboard.

Once unpublished, this post will become invisible to the public and only accessible to Somnath Singh.

Thanks for keeping DEV Community safe. Here is what you can do to flag polymathsomnath:

Unflagging polymathsomnath will restore default visibility to their posts.