The title says it all, I just tried porting Nerves and got it working!

So, for someone who are going to try porting like me, here is a summary of the key points of the process.

The target machine is OS-free CPU module of e-RT3 Products which is made by Yokogawa Electric Corp.

myasu has been writing several articles about it on Qiita, one of Japanese tech web sites.

One day he gave me the idea of porting,

It Sounds very nice!! So this hardware became the target machine for us.

This OS-free CPU module is a very unique controller that allows users to freely select the OS they want to run. For this reason, its booting specifications docs and the Linux kernel source are provided.

The specifications/sources are open so that users can freely select the OS they want to run, which made this porting successful. It's cool the info is open.😉

In this article, I will refer to it as "e-RT3" instead of "OS-free CPU module"(cause little bit long).

The porting procedure of Nerves is described in README of nerves_system_br as follows:

I went through the steps in this order, but in retrospect, the first thing I needed to do was to understand the how the target machine boots.

Once I understood this, I was able to finish step 2 above by learning how to use Buildroot and creating the kernel and dtb. Steps 3, 4, and 5, I use nerves_system_rpi3 as base and made modifications. This is a difficult part to describe what I did.

When e-RT3 is turned on, it reads the boot loader, U-Boot, in its internal ROM and starts up.

The U-Boot checks if there is a uEnv.txt in the SD slots 1 and 2, and if there is, e-RT3 operates according to the file. The uEnv.txt is like a script for U-boot.

The provided Ubuntu image has a uEnv.txt, which was very helpful for me as a working reference.

The key points of uEnv.txt are,

This is the first step.

Once you know the above, you can use uEnv.txt to load the kernel and dtb into the target machine's RAM, pass the kernel parameters, and boot the kernel with uBoot's bootm/z command.

Next, use Buildroot to create the kernel, dtb, and rootfs.

Once you know how the target boots, you will know that you need to create the kernel, dtb, and rootfs. These can be created by downloading, configuring and compiling the Linux kernel sources, but Nerves use Buildroot to do this.

Buildroot is a tool of configuring Linux systems (kernel, dtb, rootfs) for embedded use.

The make menuconfig used in the Linux kernel sources is also available in Buildroot (wrapped for Buildroot) and can be configured.

Depending on the configuration, Buildroot will download what it needs and cross-compile it on the host machine.

What it needs are, for example

Buildroot allows us to build a linux system with only configuration if the board is registered in Buildroot.

e-RT3 is not registered, so I needed to create the corresponding configuration.

By investigating the provided kernel sources, I found that it would be configured as follows. 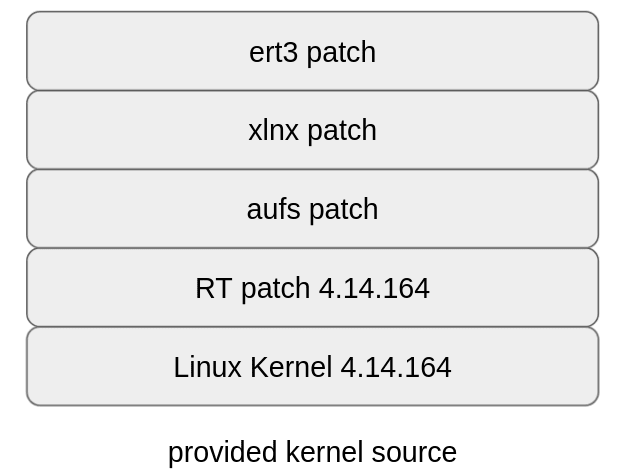 e-RT3 uses the Xilinx Zynq-7000, and it seemed that Xilinx linux-xlnx code is partially applied.

The two bottom rows can be downloaded by configuring Buildroot.
So, if I could prepare a patch for the upper two, I could make a kernel that would cover the functions of e-RT3.
(The aufs patch is not necessary for Nerves, so I ignored it.) 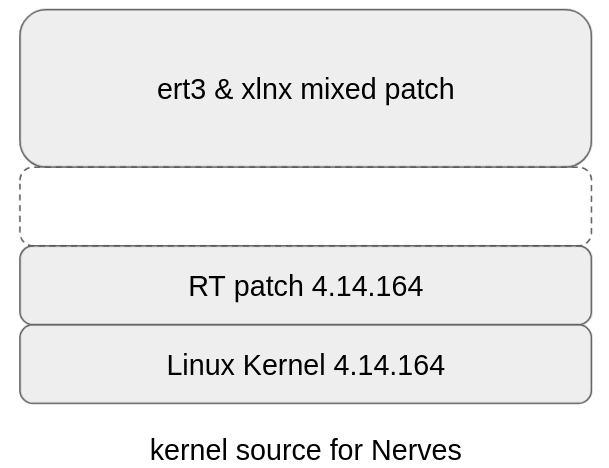 After creating the mixed patch, follow the Buildroot reference to create the necessary configuration files in the board directory, and then generate the kernel. (I'll spare you the details.

I only read the following two references which can be accessed from https://buildroot.org/docs.html. Both are excellent, easy to understand documents.

Connect the serial cable and turn on, and I could confirm booting the minimal Linux created by Buildroot.

Finally, fit it in so that it becomes Nerves

It's difficult to describe what I did, but nerves_system_f3rp70 that I created is based on nerves_system_rpi3. So you can see what I changed by looking at the diff between them. 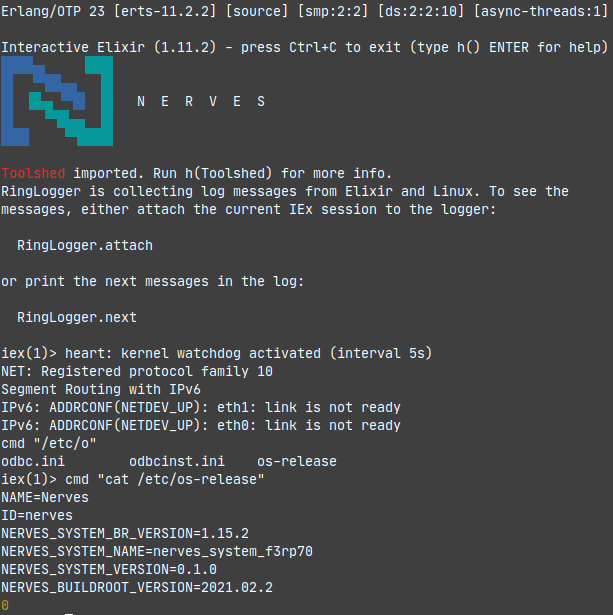 Once Nerves is ported

And there are no configuration files scattered around /etc.

These are strengths of Nerves which use Elixir and hide the Linux details.

The e-RT3's IO needs to be accessed through libm3.so which is provided from Yokogawa.

For example, DIO is not a GPIO, we can't use circuits_gpio. So, we need to use NIFs as myasu did in Real-time OS controller e-RT3 (controlled from Elixir).

It will be a good idea that creating a library such as circuits_gpio.

Simulations with Elixir and the Actor Model

pojiro
Elixir: Testando chamadas de uma API externa
#elixir #testing #braziliandevs #api
What's your favorite piece of software that you built for yourself?
#discuss
What was your win this week?
#discuss #weeklyretro