In January 2019 I took a big leap into startup entrepreneurship and started building an app that could provide advice on how to improve your sleep based on your sleep tracker's data. When I started building it I had very little experience with React and even less experience with React Native. Because of having so little experience, I was afraid to make the code publicly available despite wanting to do it so from the start.

Few weeks I finally found the courage to clean the project and switch from private Gitlab repo to a public Github repository. You can find the full code here. I've tried to provide all the necessary instructions on how to run it locally, but there might be a few mistakes on my part here and there. Please let me know if/when you come across them. 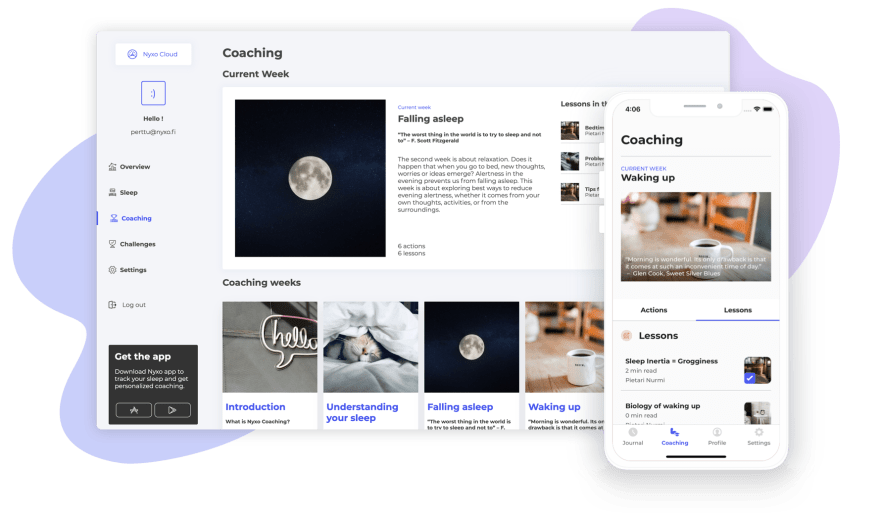 Nyxo is a mobile application for improving your sleep. Its built with React Native, AWS Amplify, styled-components, and Redux. Nyxo provides the following features:

The plan is to develop Nyxo further and allow contributions from everyone. If you want to for example build a new sleep visualization or add support for new sleep tracker, we will gladly welcome a pull request of that :)

As mentioned I built it with React Native, while originally having very little experience on it. I would like to say that I've improved a lot since starting out, so in a way this project works as a timeline of how I learned to build stuff with React Native. There are parts in the project where the code is really ugly, but also parts where I'm a little proud of it even.

To give a little rundown of the app here's what it can do:

There also some more boring features, which you can explore better by downloading the app from either App Store or Play Store. One really crucial thing that is missing is onboarding, which I'm hoping to add as soon as possible.

The app is built with the following stuff:

This is project is also very much alive and I'm contributing to it daily. If you like the app, I would really appreciate it if you give it a star either in Github or in App store / Play store. It would mean a lot to me, and make my whole week :)

I've also built another app during the past year. This app also doubles as a website for Nyxo, as it's built with Gatsby, Amplify, TypeScript, Styled-components, and react-query. You can find that project below:

This is the website that powers nyxo.app. It's built with the following tools:

In order to develop the site, you need to create file called .env.development in the root of the project. The contents of the file should we following:

We use Contentful so serve our coaching data. When development you can use our public testing environment by placing the following values in it:

Our Instagram component will most likely complain that it can fetch data, because you're missing the required tokens. We are working on how to disable this. For now you should be able…

Gitlab VS Github VS BitBucket. Which one deserve your time ? ⌚️👀

Introduction to github fork workflow - why is it so complex ?