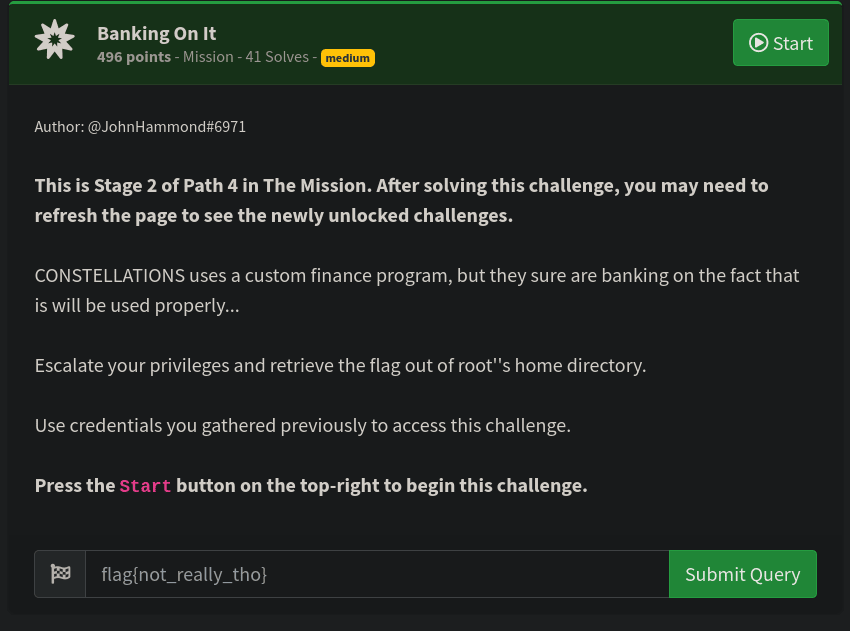 To log into the box use the ssh keys found here

I had a lot of fun doing the NahamConCTF, thanks everyone who was involved. This is a small writeup for the Bank on it challenge.

Summary:
The current user can execute the /opt/banking/bank binary using sudo, however the SETENV option is enabled, which helps persist environment variables when using sudo since it starts a session, with that we can use LD_PRELOAD to load a malicious function and get a shell as root.

Find out if the user can run anything as root we can use sudo -l , it appears that they can run the /op/banking/bank binary as root, with no password, we also see the SETENV which will come in handy later.

SETENV is dangerous, it allows us to persist environment variables when using sudo.

Since SETENV is specified in the sudoers file we can use this to load an environment variable that will allow us to hijack where shared libraries are used first - and although we could hijack one of the functions being used directly in the binary to make sure this works we'll be hijacking the _init function, more info here.

We'll name this shlib.c and now compile it like

You should now have a [shlib.so](http://shlib.so) file which we'll be using to hijack the _init function in the binary.

And we are now root!

A collection of the best creative logos that will inspire you.

Steps to Create A To-Do App With MERN stack

What Is Pay-Per-View Video And How Does It Work?