You may be traveling to work right now and reading this article wondering, is this worth to read? Well, for the majority of you, the answer is no. But in case you are in a situation, where your source code has to be stored in the svn (for example because of some legacy deployment process), but you, and your team, want to start using git and take advantage of pull requests and code reviews, then this article might be for you.

The goal is to use git for everyday commits and update svn just before deployment (or when you need it). I found a lot of tutorials, on the internet, for running git and svn side by side, but they concentrate, on how to use git locally and still commit to remote svn. That means, you cannot use git with your team and git is just your own personal helper in this case. However, I want to be able to have remote git and remote svn and synchronize them.

In the end we will have 2 workflows.

This will create new remote named svn and git will know, that this is a svn remote. You can find full documentation for git-svn. That's it. You are all set up now, so let's take a look at synchronization process.

You and your teammates will develop new features and fix bugs with git branches. You may create pull requests and merge all changes to the master branch. But there will come a time to synchronize all git changes with svn. One person on your team, should be able to do this job. These are the steps, that I follow when synchronizing changes with svn.

If you encounter a conflict while merging, that means somebody changed something in svn and also in git and git cannot solve the issue. Resolve conflicts the same way as you would in standard git merge conflict scenario and then run git add -A and git commit -m "merge master".

Now is the right time to push release branch to git remote, but this step is optional git push origin release/<id> 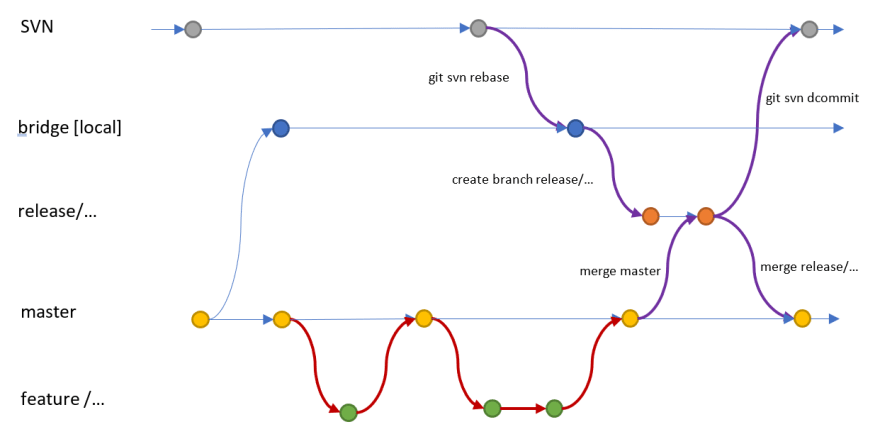 As you can see, this sequence of steps can solve also special case, when someone still uses svn and commits changes to svn repository, but some people use git. That's achieved, when we take all changes from svn and move them to release branch.

Are They Awake Yet? Building a GitHub Action to Find Out!

3 ways to time travel in Git to undo destructive mistakes