Five years ago, a security researcher registered a fake domain that is indistinguishable from apple.com. Chrome released a patch so people would be able to tell the difference. After an intense discussion and careful consideration, Firefox decided not to fix it. That's why the current version of Firefox still displays both domain as identical. What happened?

If you are reading this - and I have a hunch that you are - you know the basic Latin alphabet. What you might not think about every day is that lots of different alphabets are used across the world. Even within the Latin script, there are different alphabet flavors containing characters like ü, à, î, ł or ñ. Similarly, there is the Cyrillic script. It also has a lot of regional variations. 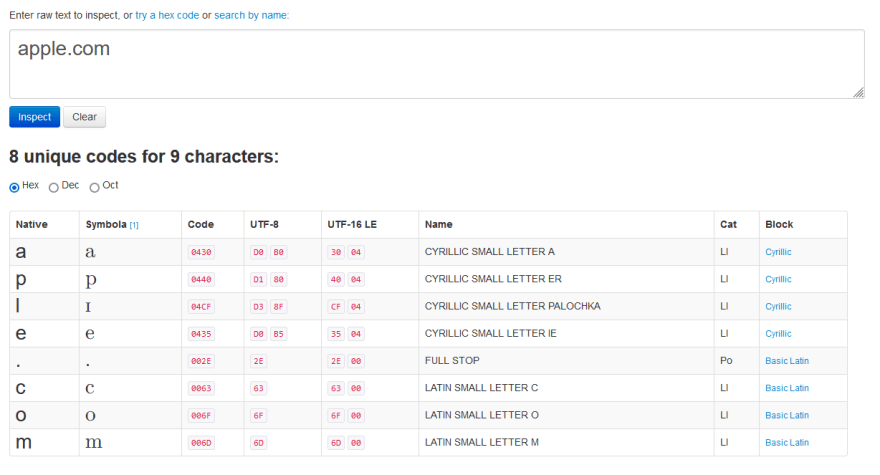 To help people recognize the difference, Chrome wrote a patch. Since then, domain names under Latin-character TLDs that consist only of Cyrillic lookalike characters now look different than the Latin domain. It now renders the fake apple.com domain name as xn--80ak6aa92e.com.

Firefox took a stance against the fix. Their reasoning is explained in the video, and they do have a point. The gist of it is that they want to treat Latin and Cyrillic as equals, and automatically treating either the Latin or Cyrillic variant as suspicious would go against that. They also argue that it's the .com registry's job to prevent the registration of lookalike domain names, which the registry isn't doing. Plus, Firefox still has Phishing Protection as a final line of defense.

So that's why five years later, you can still access the fake domain name in Firefox. Meanwhile, the fake domain hasn't been claimed by Apple, nor has it been taken offline by its domain registrar. Presumably, it's because it isn't actively trying to scam anyone. But it serves as a reminder that we have a lot of alphabets on this planet and that sometimes, this causes sticky situations.

How To Prevent Secrets From Ending Up On Developers' Machines

How to Architect an IAM Solution for Your Startups?

Steps to Build a Zero Trust Architecture for Educational Institutions

Once suspended, pieter will not be able to comment or publish posts until their suspension is removed.

Once unsuspended, pieter will be able to comment and publish posts again.

Once unpublished, all posts by pieter will become hidden and only accessible to themselves.

If pieter is not suspended, they can still re-publish their posts from their dashboard.

Once unpublished, this post will become invisible to the public and only accessible to Pieter D.