We will focus on defining what is Kafka consumer rebalancing first.

Then, we will see how it can impact the performances of Kafka Streams consumers on real applications and how we can mitigate it.

What is Kafka consumer rebalancing ?

Kafka consumers use the concept of consumer groups to allow a pool of processes to divide the work of consuming and processing records.

Each member of a consumer group, consumes from a unique set of Kafka topic's partitions. 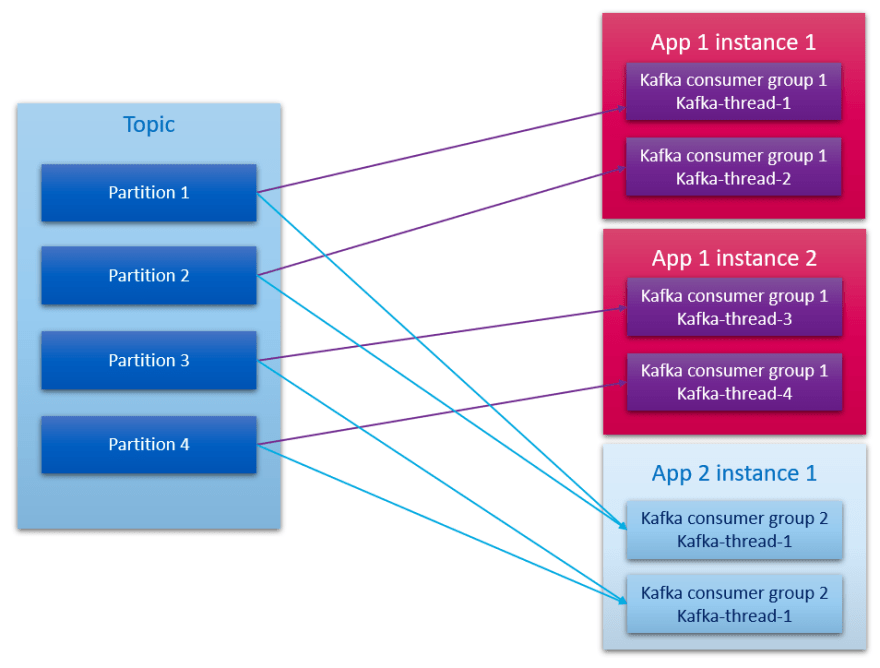 Membership in a consumer group is maintained dynamically: if a process fails, the partitions assigned to it will be reassigned to other consumers in the same group. Similarly, if a new consumer joins the group, partitions will be moved from existing consumers to the new one. This is known as rebalancing the group.

defined through the consumers configuration:

You can find the existing partitions assignment strategies in Kafka consumer config properties.

Prior to Kafka Streams 2.4 version, the default consumer assignors was RangeAssignor or RoundRobinAssignor.

When a new consumer instance is deployed, the other members of the same group are notified by the group coordinator to release their resources (commit offsets and release the assigned partitions) using the rebalance protocol, and recalculate the allocation of resources (topic's partitions) between all group members (old ones plus the new one in this case).
The mechanism is the same when the group coordinator detects the loss of one of the members (e.g. : an instance crash => no heart-beats received for session.timeout.ms, a leave group signal when a member exceeds the poll.intervall.ms when processing records...)

Below is an example of rebalance when a third consumer instance (customer 3) joins a consumer group.

The challenging step with this rebalancing is what is called the
Synchronization Barrier, at this step all resources (topic's partitions) must be released. This is done by each instance before sending the JoingGroup Request.

So until SyncResponse is received, no data will be processed by the consumers, and, as a result, processing of events from a topic happens with some delay. This is what we call a stop-the-world operation.

This is the most secure way to assign partitions. Some business cases could tolerate rebalancing like offline/asynchronous events processing, but you can imagine that it doesn't fly in some real-time event processing.

Now let's imagine that we are running a Kafka Streams application on a Kubernetes cluster. There are several use cases where rebalancing would occur:

Are they any alternative ways to rebalance to not suffer from the stop-the-world effect ?

Amongst others, these reasons, motivated the need for a more robust rebalancing protocol.
With Kafka 2.4 version, the incremental cooperative rebalancing protocol was introduced, and the main aim is to not stop-the-world when rebalancing.
It uses the StickyAssignor mechanism: it allows to conserve as much as possible the same partitions processed by each consumer instance when rebalancing.
This protocol allows to release just the topic's partitions that will be processed by another consumer instance and not the others using two rebalance phases (or two consecutive rebalances):

Below is an example of incremental cooperative rebalancing when a third consumer instance (customer 3) joins a consumer group.

Impact of rebalancing on performances

Now that we have described what is the Kafka consumer rebalancing, let's see how it impacts performances on a Kafka Streams based platform.

We have a first microservice with 3 applicative instances, that is deployed on a Kubernetes cluster. This service consumes events from a single topic #1 using Kafka Streams 3.1 version. This topic contains 48 partitions and there are 3600 events per second published on it.
On each of the 3 instances we use the Kafka Streams configuration property:

Hence, on a single app instance we process events from 16 partitions with 16 Kafka Streams threads.
This microservice is only enriching the records it processes with additional information. Hence the number of events stays the same in the second topic.
The processing of a single event takes around 1 milliseconds and the stream is stateless.

We plug a second microservice with 4 applicative instances. Each of them consuming from a single topic #2 of 64 partitions using Kafka Streams 3.1 version. We use the same Kafka Streams configuration property, and, as a result, each instance processes events from 16 partitions using 16 Kafka Streams threads. It receives as well 3600 events per second from the processing of the first microservice.
The processing of a single event takes around 3.5 milliseconds and the stream is stateless.

We are using Kafka Streams 3.1 version and by default the incremental cooperative rebalancing is used.

We will be performing a rolling update of the first microservice, simulating a software update, to see the impact on the platform while injecting 3600 events per second on topic #1 for 30 minutes.

The microservices are monitored via Prometheus solution and they are exposing Kafka Streams metrics amongst other metrics.
Here are the metrics used to monitor the impact of the Kafka consumer rebalancing mechanism:

To do so we simply need to add the following Kafka Streams configuration property to the deployment configuration of our first microservice:

This ensures that the Kafka cooperative rebalancing is not activated anymore since it didn't exist in this version of Kafka.

In the following graphs we compare the impact of Kafka incremental cooperative rebalancing to the Kafka eager rebalancing.

The rebalance average time is the same (~40sec) when we compare the eager rebalancing to the cooperative rebalancing.

Overall the lag is scattered over time when using the cooperative rebalancing, and the average end-to-end latency time of a record is high in both cases.

What we can retain from this test is that the cooperative rebalancing allows for some consumers to sill consume during a rebalancing but overall the average end-to-end latency time of a record is pretty high in both cases.

We have seen that some consumers get rebalanced several times with the cooperative rebalancing during the rolling update. It puts pressure on some partitions which are not anymore consumed for an important time and this induces high average end-to-end latency time of a record on those partitions, whereas on some other partitions which didn't get rebalanced that often, the average end-to-end latency time of a record is rather low.

When the consumers, which consume from partitions with high number of tanked messages restart after the rebalance, they have to dequeue a lot more items than for the other partitions, hence the message consumption on those consumers is increasing for a short period of time until the lag is consumed.

Let's see how we can decrease the impact of Kafka rebalancing through various tips and how they have impacted our platform.

With the first versions of Apache Kafka client (2.4) using the CooperativeStickyAssignor (incremental cooperative rebalancing), there was no huge difference observed in terms of performances, but this was for preparing to a multitude of changes that have been delivered in next versions (2.6) and that will be delivered in the future. That is why it's essential to upgrade frequently to the latest release.

There is a Kafka Streams configuration property named:

It corresponds to the timeout used to detect client failures when using Kafka's group management facility.

The client sends periodic heartbeats to indicate its liveness to the broker.

If no heartbeats are received by the broker before the expiration of this session timeout, then the broker will remove this client from the group and initiate a rebalance.

In Kafka Streams 3.1 version that we are using the default value is 45sec.

If an application instance gets unavailable, rebalance will happen only after the default 45sec, and eventually induce a lag in events consumption.

In conjunction with this property there is another Kafka Streams configuration property named that requires an update:

It corresponds to the expected time between heartbeats to the consumer coordinator when using Kafka's group management facilities.

Heartbeats are used to ensure that the consumer's session stays active and to facilitate rebalancing when new consumers join or leave the group.

The value must be set lower than session.timeout.ms, but typically should be set no higher than 1/3 of that value.

It can be adjusted even lower to control the expected time for normal rebalances.

The default value of the heartbeat is 3sec in Kafka Streams 3.1 version that we are using.

We need to be careful with these settings, as it increases the probability of rebalancing occurrence on a daily basis, and consumers might hang in long rebalances, depending on network quality and stability.

By default, Kafka Streams doesn't send consumer leave group request on application graceful shutdown, and, as a result, messages from some partitions (that were assigned to terminating applicative instance) will not be processed until session by this consumer will expire (with duration session.timeout.ms), and only after expiration, new rebalance will be triggered.

By default in Kafka Streams 3.1, we have session.timeout.ms=45000, so it means during a single applicative instance restart, messages by some partitions will be processed at least within 45 seconds, and it's painful for real-time requirements.

You can find more details about a discussion on this property in this Kafka Jira ticket.

The default value is false in Kafka Streams configuration.

Our application is deployed on a Kubernetes cluster and as such we can easily control the number of applicative instances which are created during a rolling update.

One can use the following Kubernetes deployment properties to achieve this:

The more instances we rollout at the same time, the more partitions will need to get reassigned through Kafka rebalancing, eventually leading to high end-to-end latency time of a record, and a higher max lag per topic.

Decreasing the number of instances which are started at the same time can mitigate the impact of Kafka rebalancing.

In that case, a single applicative instance will be started at a given time. The deployment process will be longer for sure, but overall we expect to have more stable performances on the platform, which is what we are looking for real-time use cases.

We have applied the above recommendations and we have ran the same test protocol than before except that we have launched 4 rolling updates of microservice #1 in 30mins to compute bunch of data. Here are the results:

We do not see anymore the impact of Kafka rebalancing on the number of events processed by the microservice #1.

We have far less lag than before the optimizations. We went down from ~40k elements with incremental cooperative rebalancing to ~150 elements.

The rebalance average time went down from 40sec to ~1sec with the optimizations.

Here is a table summing-up the results of the optimizations on the platform:

Kafka consumer rebalancing mechanism has a non-neglectable impact on the performances of real-time applications. It can be mitigated by setting some Kafka consumers properties but it is still present.

All you (probably) need to know about caching on the web 🗃

Once suspended, pierregmn will not be able to comment or publish posts until their suspension is removed.

Once unsuspended, pierregmn will be able to comment and publish posts again.

Once unpublished, all posts by pierregmn will become hidden and only accessible to themselves.

If pierregmn is not suspended, they can still re-publish their posts from their dashboard.

Once unpublished, this post will become invisible to the public and only accessible to Pierre Guimon.

Thanks for keeping DEV Community 👩‍💻👨‍💻 safe. Here is what you can do to flag pierregmn:

Unflagging pierregmn will restore default visibility to their posts.