You can check out our dashboard and Opensource repo here:

I was part of the leadership team of a fast-growing company and it was in May 2017 when we decided that we needed to become a better agile team. We realised that we wanted to become better at estimations and at reacting/taking action on feedback as we were growing at a very fast pace.

As a team, we spent considerable time reading practices adopted by other companies and then sitting in the room with a whiteboard and having passionate discussions on what would work best for us.

We knew that there was no ‘best method’ or right way to go about everything, therefore, we experimented with different approaches, but always found it difficult to quantify the effectiveness of those changes. It was always about the gut feel, and what the majority of the team felt.

I was particularly happy when we decided to explore the science around the impact of agile practices at Devtron. Now, people fortify their gut feeling with data. But that was only half the battle, we were yet to figure out how to present it in a way that meaningful insights could be derived out of it.

In this blog, we are going to share the journey of evolution of this product, the initial failure and the way forward, , how we evolved our product to what it is today. The journey is still ongoing, and would love to have your feedback and thoughts on how we can make it better.

The science behind the metrics

As the whole reason to adopt agile is to do more frequent and stable deployments, it was a no brainer to have the following metrics:

In order to have higher deployment frequency and less failure rate the surface area of the release should be as small as possible and therefore we introduced:

We launched a version of the Deployment Metrics a few months back. This is how it looked in the first version. Let’s see what we did and what went wrong. 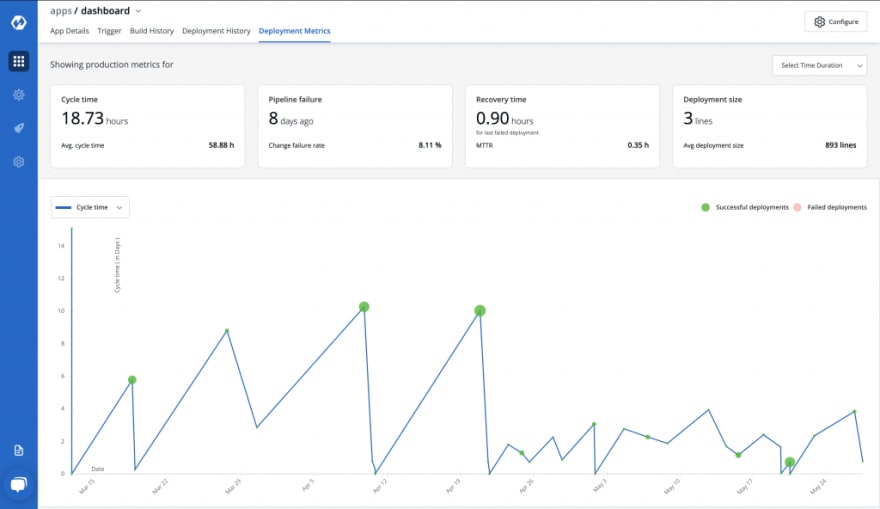 We had put cards on the top which mentioned cycle time and deployment size for the latest deployment, time since the failure and time it took to recover from failure.

Hover state showed this information in a tooltip. Users could view these metrics for a set of relative time ranges, i.e; last 15 days, 30 days upto 6 months.

We thought that we had done a good job of putting all data contextually so as to help developers make informed decisions, and that it would see good uptake from developers who want to adopt better DevOps practices.

Over a period of a few months, we waited for users’ feedback on this page. What happened next was any product designer’s worst nightmare. It appeared that almost none of our users were engaging with this page. Moreover, we didn’t find much adoption internally as well. This meant that the developers at Devtron themselves were not able to leverage it to improve their metrics.

In fact, I clearly remember in one of the meetings around May 2020 when one of the developers threw up his hand and said he was exasperated trying to find whether our process change has been able to mitigate the impact of remote working. That is when we decided to step back and take a closer look at the reasons why this might be happening and how we can make these metrics more usable.

We did an intensive half-day session with a focus of tearing down the existing feature and design. Every developer in the company communicated why they were not using it. We realised our biggest mistake was to design this page without looking at the sample data.

The biggest problem was posed by the huge variation in data points.

All in all, it made these charts totally unusable. Then we faced other minor problems: :

Armed with the knowledge of challenges in the usability of metrics and data visualisation we decided to rethink it to solve this problem.

Though we use the Jobs to be done framework to identify the desired outcome, this time we added another step which we have found particularly helpful in data intensive applications – Questions to be answered. (We didn't know if such frameworks already existed but we have been using this homegrown framework internally for sometime now).

Hence, we decided to look at the metrics from a user’s lens, the goal this time was to identify key questions the user wants to be answered through this data so that he/she can make an informed decision.

Questions to be Answered (QTBA)

We framed user goals in the form of questions and statements so that we could think in terms of answering these questions while redesigning.

We redesigned the page from scratch in the pursuit of answering the above questions and some more. Take a look at it yourself. 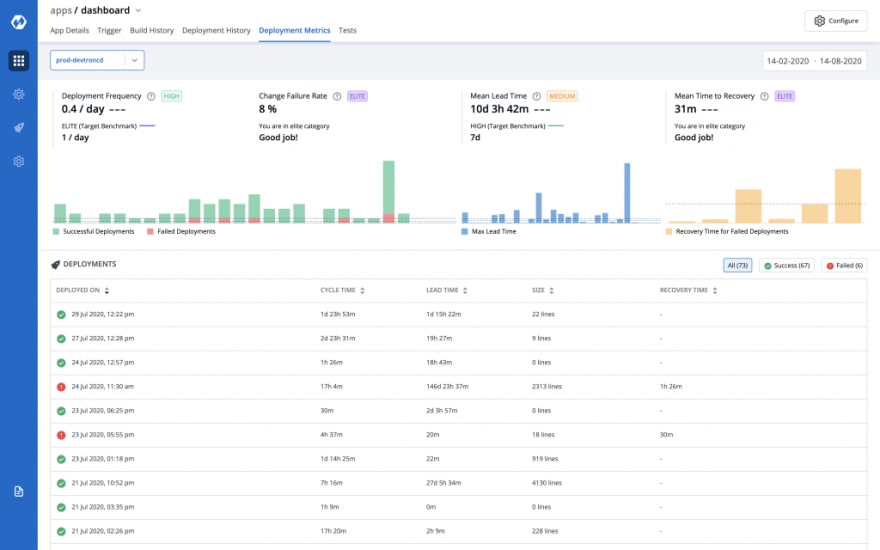 In this design as you would see, we made fundamental changes to the previous design.

Use easy to consume metrics

Cycle time and deployments per day are related metrics, they are inversely related to be precise. Multiple deployments can happen in a day and each one of them will have a different cycle time. With dates as x-axis cycle times of different releases on the same date overlap with each other making them indiscernible.

Therefore, instead of cycle time, we are now charting the number of deployments per day as it is easier to understand trends over time.

Chart is to see trends not for RCA

In the previous approach, all data points were juxtaposed in one chart so that users could find the root cause of the behaviour. But we realised that it was creating cognitive overload.

Therefore in the newer version we decided to use charts only for anomaly detection and delegated RCA responsibilities to tabular data format. Instead of all data points juxtaposed in one chart, we placed all three metrics next to each other to highlight any anomalies.

Each metric is now supported by additional information to make the metric easily understandable and usable. 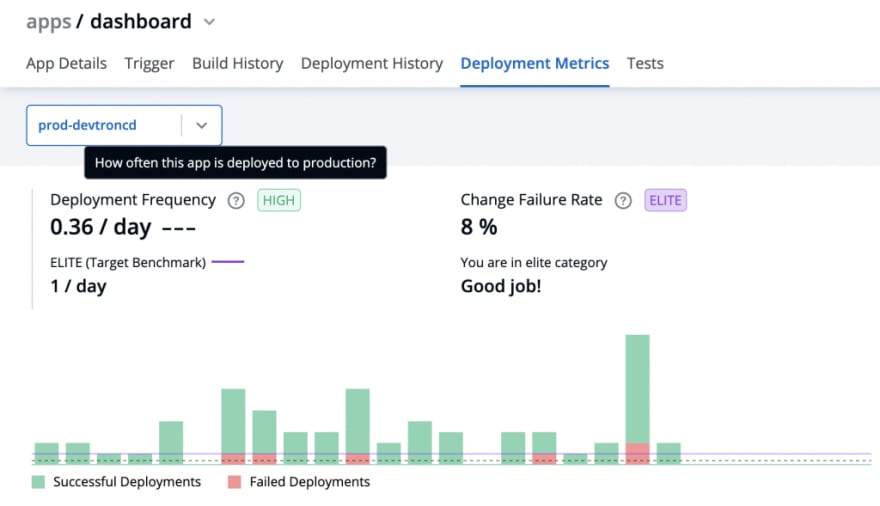 Example, for Deployment Frequency we have:

On clicking the benchmark, it opens a modal which further explains the metrics and the various benchmark categories for the metric.

We also realised that, though the number of deployments is the right metrics, deployment frequency is difficult to understand and hence we added cycle time information along with it for better understanding and correlation. 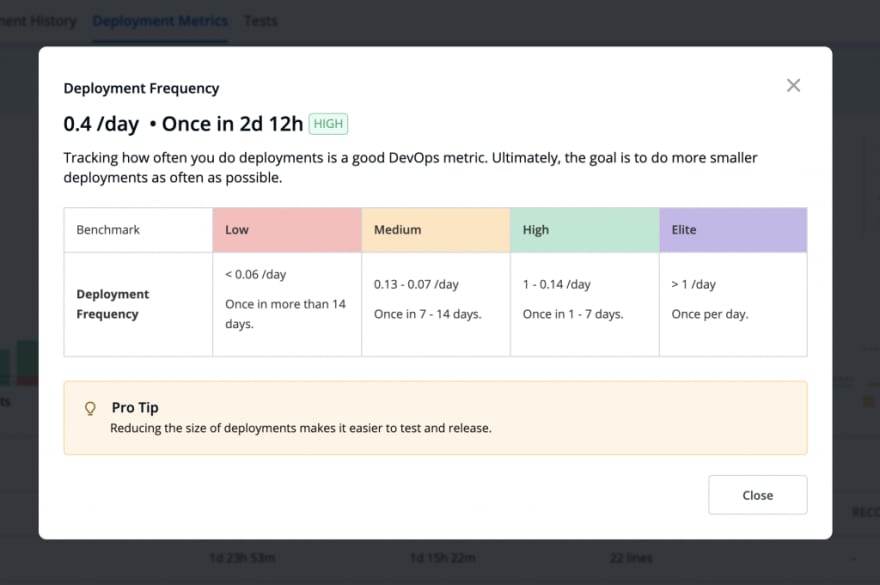 Hovering over the graph further shows details for each bar.

Clicking on each bar further opens a modal (to drill down) showing the deployments related to this particular bar. The modal additionally shows other data points (Cycle time, Lead time, Deployment size, and Recovery time if the deployment had failed) for easier correlation between various data points. 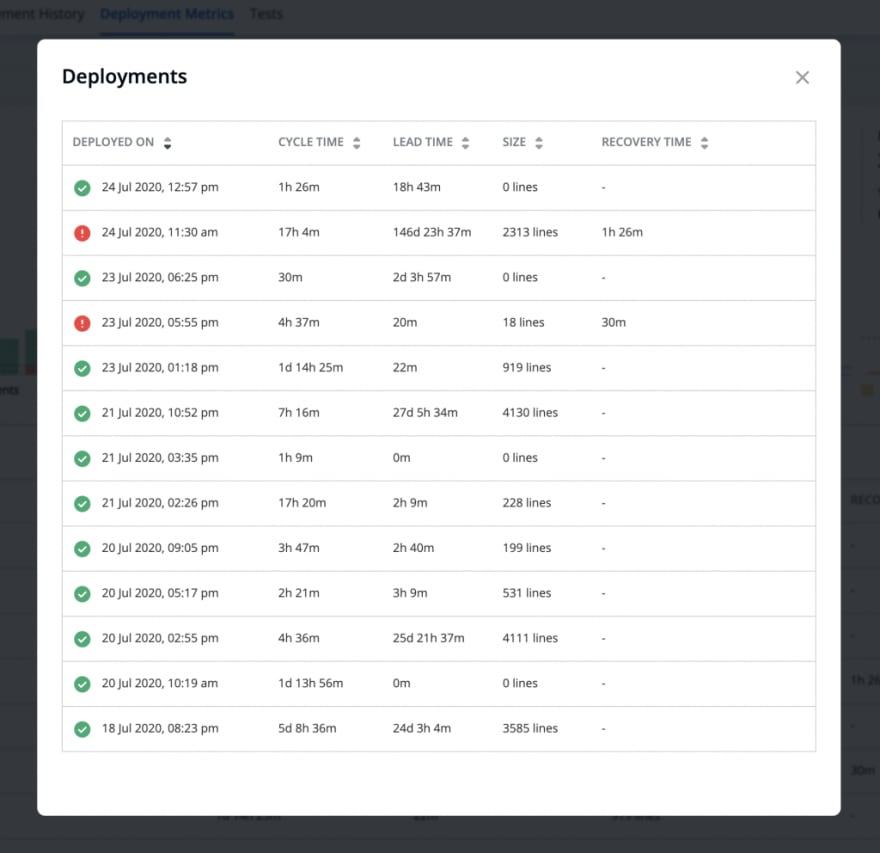 Below the graphs, we added a deployments table showing all deployments of the application for the selected environment in the specified time period. The deployments lists can be filtered by successful and failed deployments based on the focus area of the user. 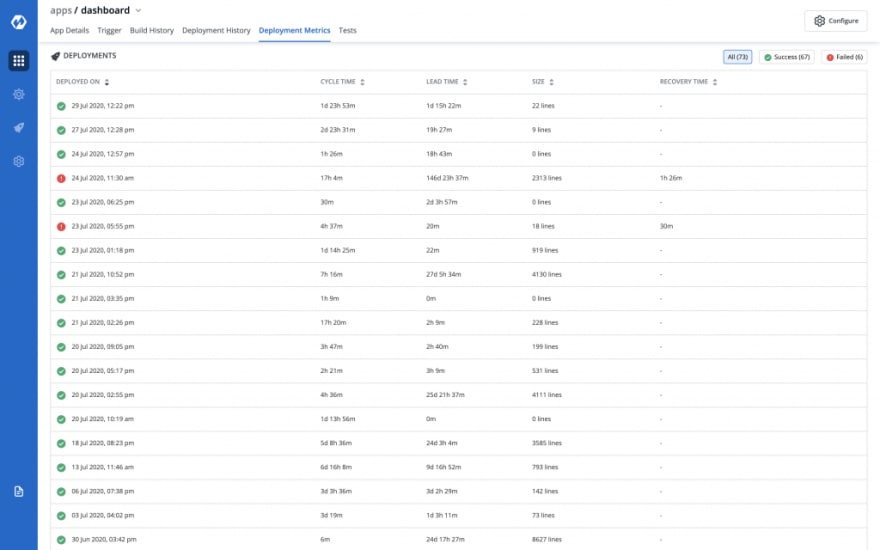 This solves the problem we had with hover, wherein you had to remember previous data points to compare. Now data is visible in tabular format and therefore it’s easier to compare changes across multiple releases.

Also, we went back to to using cycle time instead of number of deployments per day as this is a non aggregated view of data.

Sorting is provided on every column so that it becomes easier for you to find anomalies for e.g. largest deployments, highest recovery time, highest lead time or cycle time, etc.

You can also see the details of a deployment by clicking on the deployment date. 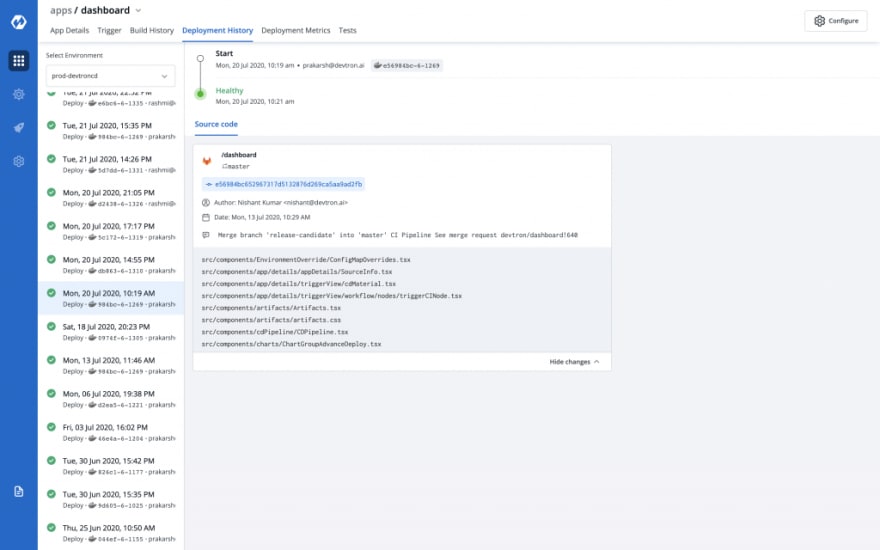 We believe that through this initial step that we have taken, teams who want to keep challenging themselves will be able to take data backed decisions and will be able to iterate quickly and confidently.

Let us know what you think about the design and our redesign process in the comments below. Also, if you have suggestions related to this feature do reach out to us and you can contribute as well.

If you would like to know more about UX design and Devtron, I made a walkthrough with Saiyam Pathak, Director at Civo. He is a well reputed YouTube influencer and has a great following in the commnity. You can check it out here: