In February, we sent out a developer survey to our audience to learn more about devs and their job search habits.

We wanted to gain a better understanding of what bugs developers about the recruitment process. Our big-picture goal is to revolutionize tech recruitment as a whole. This includes both sides: helping recruiters/companies AND developers have a better experience.

Developers told us about…

It was a small survey of nearly 500 respondents. Still, we feel that we can reach definitive conclusions thanks to the diversified answers and a few clear trends that emerged in the results.

Just take a look at the word cloud that we generated out of the free text answers for the question “What do you hate most about the recruitment process?”

Most developers are overwhelmed by the interview process, how long it takes, and they desperately need more information up front (such as salary info). 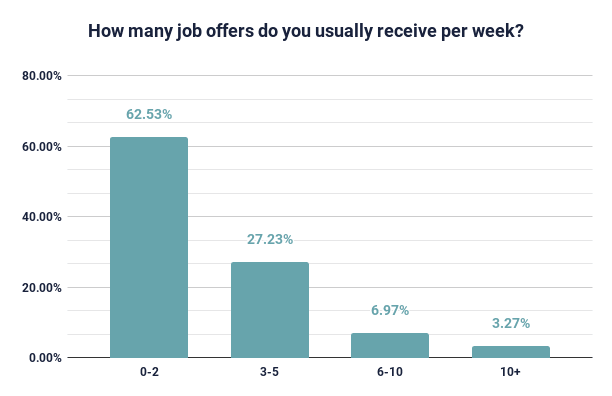 The majority of devs get no more than two job offers per week. That may not seem like much but for many, it could be overwhelming.

At the same time, we would love to chat with the 3% of devs who said they receive 10+ job offers per week. We suspect that these devs are the ones who usually appear in the top 10 of search results on LinkedIn.

Let’s give these programmers a break and make space for new talent.

2: Almost half of participating developers answer these messages 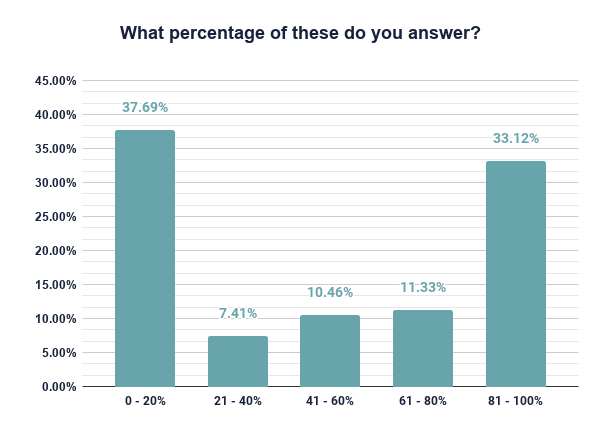 Developers either answer their messages or they don’t. Nothing surprising there. However, almost half of them do try to get back to recruiters.

You will see in Question #3 and Question #9 WHY devs don’t respond. The quality of recruiter messages can make or break new relationships. The more automated the message looks, the less likely developers will make time to explore the opportunity.

3: Over 64% of developers get offers for the wrong job 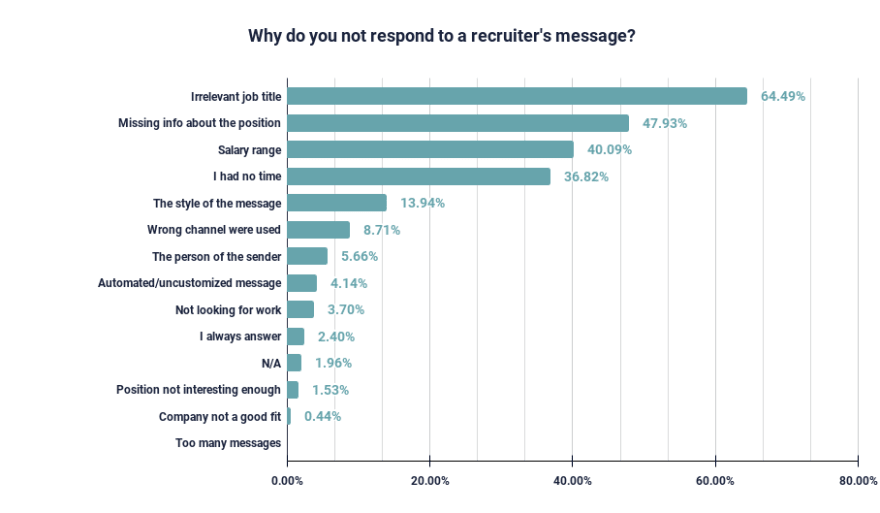 Type: multiple-choice question. Developers could select up to 3 reasons.

More than 64% of developers included the reason ‘Irrelevant job title’ in their responses. They are receiving a lot of messages about job opportunities that do not reflect their expertise.

Why do we think this is? A developer’s past is still the main defining element in their job offers in the present and in the future. This is problematic. Just because they did two small projects in Java 8 years ago, they shouldn’t be getting messages about it today. This is why CodersRank has the “Preferred Job Roles” and the “Technologies I don’t like” sections.

Other times, developers don’t respond because some crucial information is missing from the recruiter’s messages. The salary range given is either not up to their preferences or absent entirely.

36% of developers have no time to respond to recruiter inquiries.

4: Most developers are blasted with messages on LinkedIn 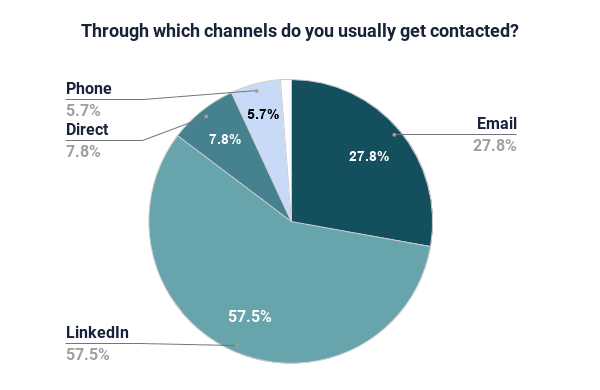 Type: multiple-choice question. Developers could select up to 3 channels.

57.5% of developers usually get messages from tech recruiters & companies via LinkedIn. About 28% of them receive emails and the rest get direct messages on social media or phone calls.

Within the ‘Other’ option, developers mentioned Stack Overflow, Xing (the German LinkedIn), and word-of-mouth.

5: 51% of developers are OK with messages via LinkedIn 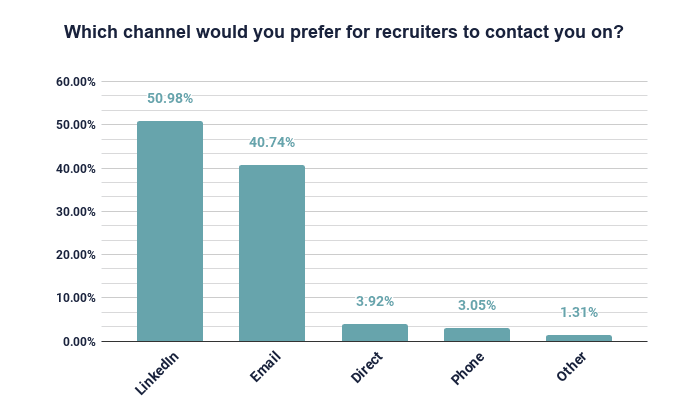 More than half of all devs don’t mind receiving messages on LinkedIn. They likely prefer to keep their recruitment-related communication within a professional platform.

‘Email’ landed as a close second in top communication choices. 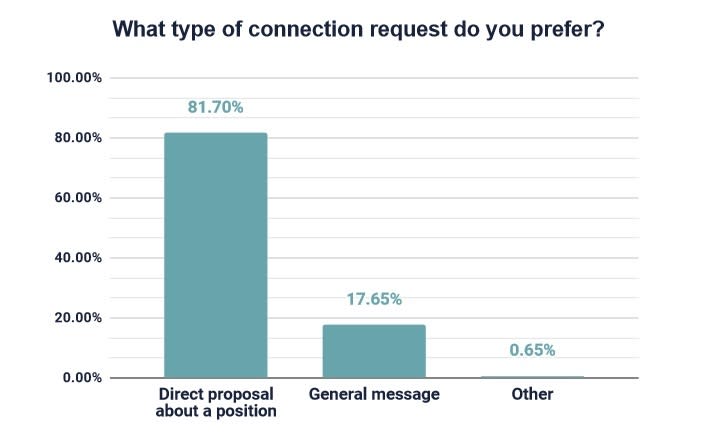 82% of developers want to see a direct proposal about a position in their inbox. No fluff. No general introductions. They are not interested if the company may have a fitting role in the future. Programmers don’t want to entertain recruiters with no current openings.

7: When receiving a job offer, 82% of developers want to see the full tech stack needed

The recruiter has made the initial contact. Now, the developer is ready to see what the job has to offer. To even consider this job, recruiters should include the above info as the bare minimum.

Tech stack, responsibilities, and company name are in most of the answers. Sometimes recruiters are secretive about the company they are hiring for and the devs are not crazy about that aspect. They want to know as much about the position as possible.

8: LinkedIn & GitHub play big roles when developers are looking for a new job 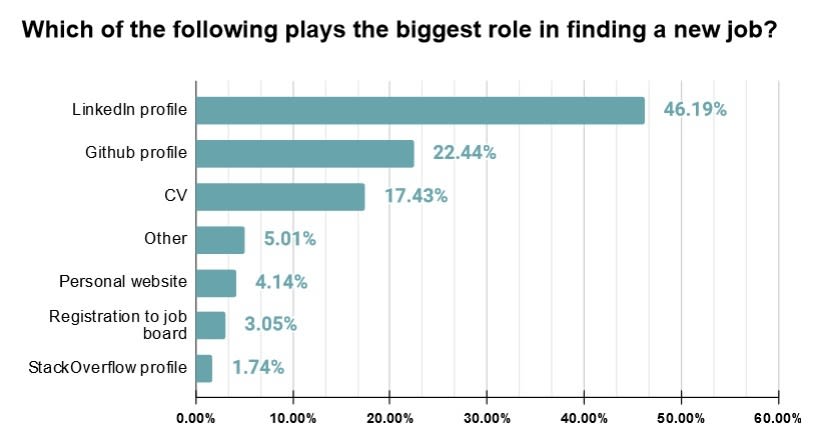 LinkedIn is the biggest contributor to finding a new job. Recruiters have become more and more savvy in the past few years which reflects in GitHub being the second important element in the job search.

Other platforms, such as a developer website and job boards are supporting components to the main three profiles.

9: The biggest problem in tech recruitment is the convoluted, long processes 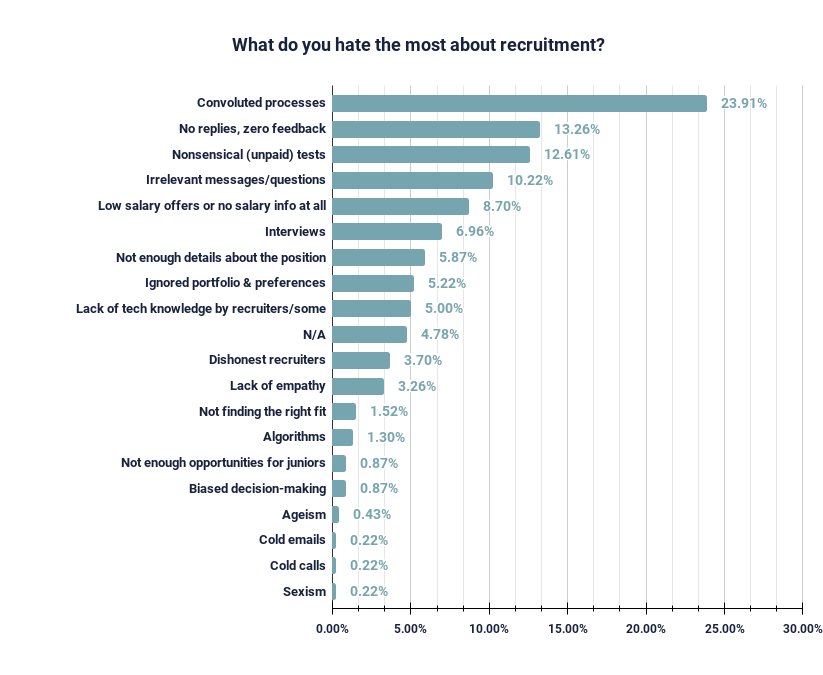 To give space for any issue that’s bothering developers, we gave them an open-ended question that they had to fill out manually. So, what do developers hate most about recruitment?

We see a clear trend emerge in the results. 24% of answers include complaints about the convoluted, time-consuming process of recruitment. They also dislike the fact that they often do not hear back about a position, nor is there general feedback. Developers are irked by the nonsensical and often unpaid tests. Many mentions that these tests have nothing to do with the role they’re applying for.

We collected all complaints under ‘Irrelevant questions/messages’ that contained mentions of spammy, untargeted, automated, or otherwise irrelevant messages from recruiters/companies.

Over 8% of developers have problems with the salary information provided. Recruiters either present no salary info until the very end or devs feel the offer is too low. Another 5% of them feel that recruiters do not provide all necessary details about a job.

More than 5% of developers say that their portfolios and preferences are often ignored. Even if they clearly state “no PHP roles, please” on their profile, for example, they still get messages about PHP roles.

The next few comment categories target recruiter behavior with little mercy. They say that recruiters and some companies are lacking enough technical knowledge, they are dishonest about positions, or that they downright lack empathy. Some developers mention that they feel they are treated only as “tech stacks”, instead of human beings.

We also received some comments from developers who have faced ageism, sexism, or biased decision-making in their careers. We speculate that we may have under surveyed developers who identify as women, and therefore, we suspect that these issues would have received a larger share in the survey. 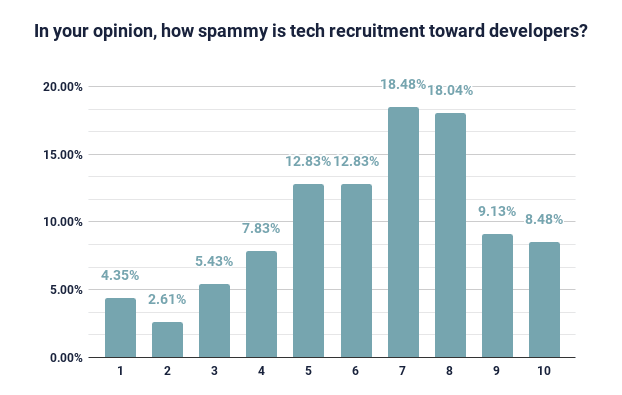 According to our statistics, 67% of developers would mark tech recruitment as spammy in general. In this figure, we included any answer above 6 on the scale.

To understand why so many developers voted 6+, please refer to the Quotes from developers section below.

Below, we highlighted a few comments straight from the question ‘What do you hate about recruitment?’ Note, that some of these are very blunt. We hope that recruiters and companies will appreciate the honest developer feedback and make an effort to update their processes.

"Recruiters always (take it) for granted that you should be interested in what they offer, but the reality is that if I already have a job you have to show me something that triggers my interest if you want me to reply. And nope, it is not the fact that the unknown company is a leader in their market or that they have table tennis in the coffee area."

"The position is now remote, but after COVID it’s on-site."

"Some recruitment processes have many steps, taking months to give a final answer. Also that in some cases, they issue code tests, and theoretical tests, that in my opinion are useless."

"Why are they asking for my CV via LinkedIn when they can check everything on my profile?"

"Employers/recruiters asking every tech stack they heard of regardless of whether they’re relevant."

"Bulk sent emails, with no personal touch. Having to send a CV while they could just check LinkedIn. Not hearing back from recruiters when you’re rejected. Not having it clear from the beginning what are the process steps."

"After getting selected for the practical test, spend days/weeks building the project and after that, get rejected without even a reason for so. This is truly unmotivating."

We can say that devs would prefer a simpler interview process with fewer steps and more feedback along the way.

In one word, IT hiring is broken. There is no doubt about it.

This is why CodersRank’s mission is to revolutionize tech hiring and fix recruitment from the ground up. “The ground” in this case is a standardized profile where developers can represent their true value based on their experience and other preferences. Less mismatched requests, less time wasted, more excellent developers placed.

Are you a developer?

CodersRank is a platform built by developers for developers. We get your frustration about spammy practices and time-wasting interviews. We are aiming to connect you with recruiters/companies who are ready to embrace experience-based evaluation. Even if you’re not open to new opportunities right now, you can use CodersRank to monitor your progress as a professional.

The more info you provide about your preferences on your profile, the less likely you’ll get irrelevant messages from recruiters going forward.

Are you a recruiter?

We hope this survey was helpful to you in understanding developers. To simplify your interview process, review developers’ experience instead of their test results. And for a better response rate, make sure to only contact candidates who qualify for your opportunity.

CodersRank provides you the platform for this. Here, developers create their profiles by providing their real experience (via repositories) and combining it with their digital footprint. This gives you a code-based evaluation you can trust.

Sign up for a free trial to see our talent pool ››

Who filled out this survey? 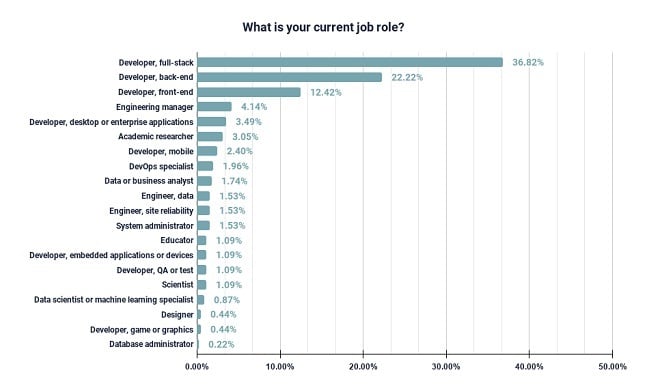 In this survey, more than 71% of respondents are either full-stack, back-end, or front-end developers. But you can find a variety of titles from across the spectrum: from engineering managers to mobile developers and sysadmins.

The results line up similar to the larger Stack Overflow survey. This tells us that our respondents are very close to the typical representation of the developer landscape.

Note: in the CodersRank survey, we did not ask developers about their gender. The numbers you see are unweighted and may have slight discrepancies with the larger developer community. 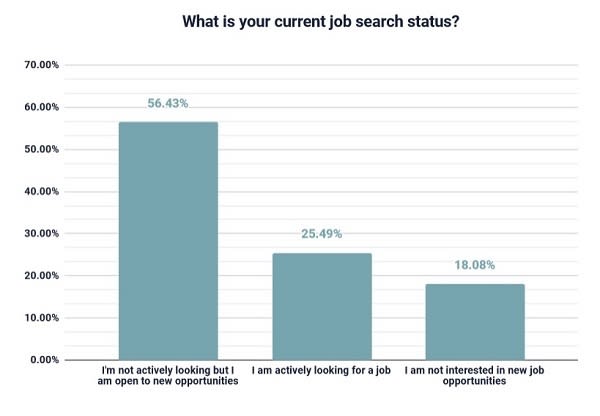 Recruiters know this type of job-seeker very well: the passive candidate. They are not actively looking but open to new opportunities. In this survey, more than 56% of developers say they are interested in something new, and an additional 25% say that they are actively looking for a job.

Some handy HTML tags can do to make things easier