One part of the Start Kubernetes course I am working on (in addition to the book and videos) is the interactive labs. The purpose of these labs is to help you learn Kubernetes by solving different tasks, such as creating pods, scaling deployments, and so on. What follows is a quick explanation of how the end-user experience looks like.

Each task has a set of instructions and requirements. For example, here's how the web page looks like for one of the tasks in the Pods section: 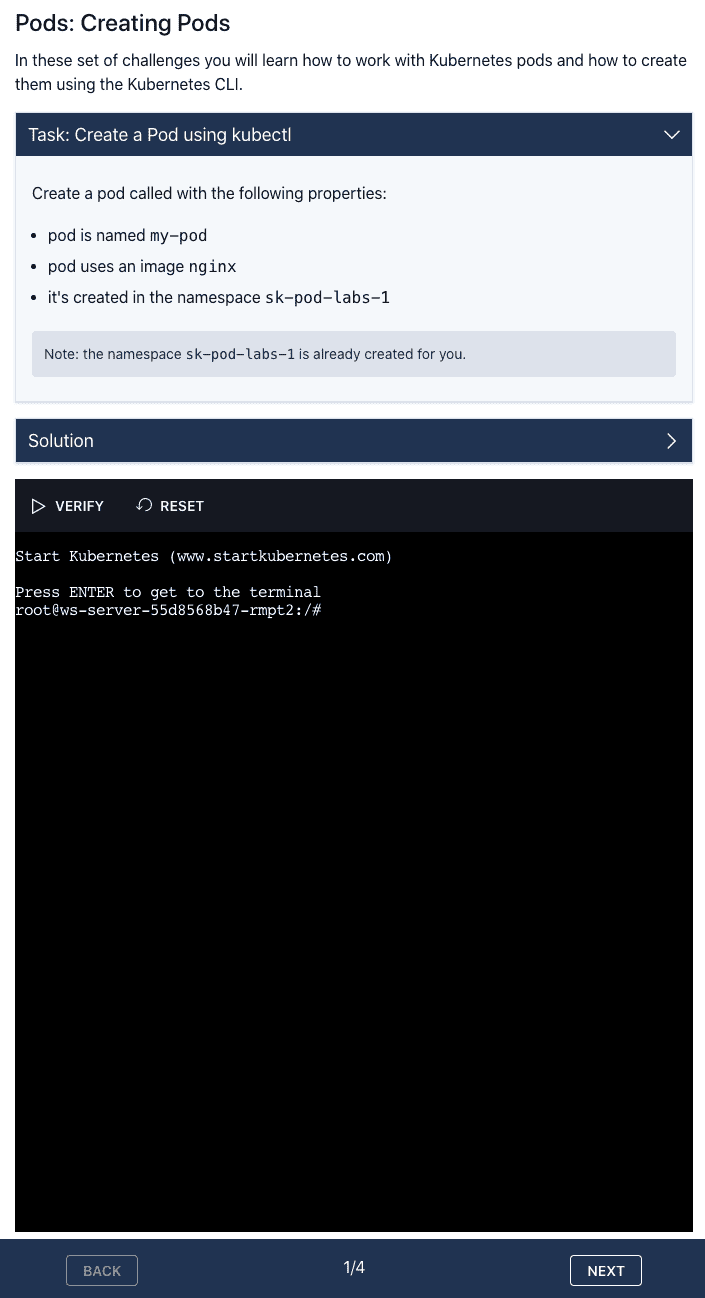 The top part of the page explains what the task is and what you need to accomplish (e.g. create a Kubernetes Pod with a specific name and image).

The bottom portion is the actual terminal window where you can interact with your Kubernetes cluster. From this terminal, you have access to the Kubernetes CLI and other tools and commands you might need to solve the tasks.

To solve the task from the screenshot above you need to create a new Pod with the specified name and image. Once you do that you can click the VERIFY button - this will run the verification and make sure you completed the task correctly. In this case, it checks that the pod with the specified name is created, it uses the correct image and it is deployed in the correct namespace.

At the moment there are two pieces that make up the solution: the web frontend and the backend that runs the terminal I connect to from the frontend.\

For the frontend, I picked TypeScript and React. I have been using Typescript for the past couple of months and I really like it. If you're coming from the Javascript world, it does take a bit to get used to it, but the switch is definitely worth it. Typescript is nothing but Javascript, but it has additional features on top - stuff like types, static typing, and generics.

Like with my other projects, I am using Tailwind CSS. I still think I am 'wasting' way too much time playing with the design, but with Tailwind, I am at least constrained in terms of which colors to use, uniform margins/padding etc. And before anyone says something, yes, I know, you can overwrite and customize Tailwind to include whatever you want, but I am fine with the defaults at the moment.

As for the dependencies - I am using the React Router, WebSocket hook, and xterm.js for the terminal magic.

This means that I am actually getting a terminal inside of the Docker image where the backend is running. It's far from perfect, but it is a start. A much better solution would be to run a separate container whenever a terminal is requested.

Since everything is running inside a Kubernetes cluster, the terminal that gets initialized in the backend container has access to the cluster. Note that this is not in any way secure and it is only meant to be running in your local cluster. There are ways to isolate the terminal user to be only able to execute certain commands or have access to a single cluster etc.

An even better solution would be to isolate the terminals from everything. That means that the frontend and backend don't have to run inside Kubernetes at all. Whenever a terminal is requested a new VM could be allocated by the backend. This would allow for complete separation of everything. Even if a malicious actor gets access to the VM, they don't have access to anything else and the VM gets terminated.

Here's a quick diagram on how this could work (it's probably way more complicated than it looks like): 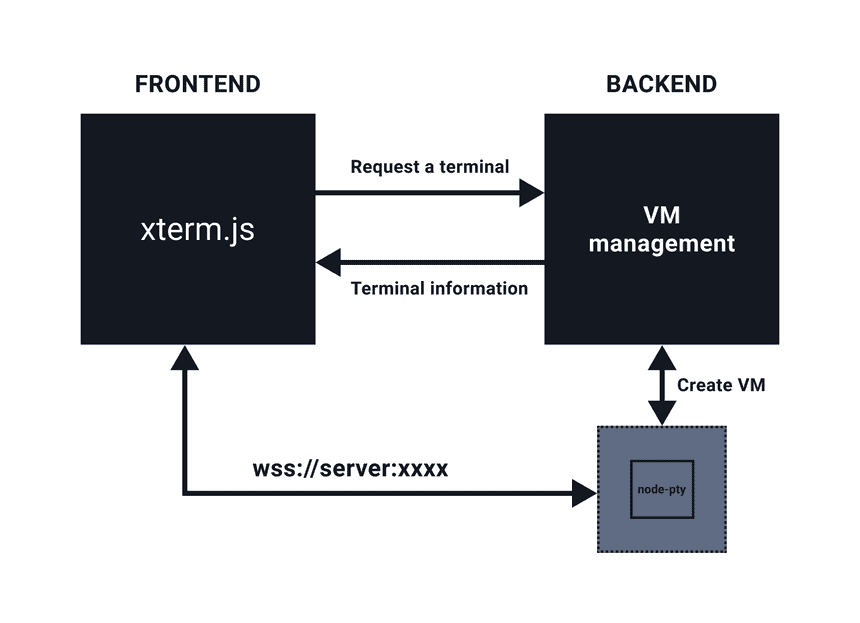 The logic for VM management would have to be smart. You could probably keep a pool for VMs that are ready to go, so you can just turn them on, send back the VM information, and users can connect to the terminal. The upside with this approach is that you could have different VM images prepared (with different stuff installed on them), you can bring up multiple VMs and simulate more complex scenarios etc. However, the downside is that it is way more complex to implement and it costs $$ to keep a pool of VMs running. It would definitely be an interesting solution to implement.

Back to the real world and my local environment setup. As mentioned previously I am running both components (frontend and backend) in the Kubernetes cluster. I could have run both of them just locally, outside of the cluster - the terminal that would get allocated would be on my local machine, thus it would have access to the local cluster. However, I wanted to develop this in the same way it would be running when installed - i.e. everything inside of the cluster.

I am using Skaffold to automatically detect the source code changes in both components, rebuild the images, and update the deployments/pods in the cluster. At first, I was a bit skeptical that it would take too long, but I must say it doesn't feel like it's too slow to refresh/rebuild.

To set it up, I started with the Docker images for both projects. In both cases, the Dockerfiles were 'development' Docker files. That means I am running nodemon for the server project and the default react-scripts start for the frontend.

Here's how the Dockerfile for the React frontend looks like:

The next step was to create the Kubernetes YAML files for both projects. There's nothing special in the YAML files - they are just Deployments that reference an image name (e.g. startkubernetes-web or ws-server) and define the ports both applications are available on.

In the section under the build key you notice the image names (from the YAML files) and the contexts (folders) to use to build these images. Similarly, the deploy section lists the manifests to deploy using Kubernetes CLI (kubectl).

Now you can run skaffold dev to enter the development mode. The dev command builds the images and deploy the manifests to Kubernetes. Running the kubectl get pods shows you the running pods:

Skaffold supports copying changed files to the container, without rebuilding it. Whenever you can avoid rebuilding an image is a good thing as you are saving a lot of time.

The files you want to sync can be specified under the build key in the Skaffold configuration file like this:

Notice the matching pattern monitors for all .ts, .tsx and .css files. Whenever any file that matches that pattern changes, Skaffold will sync the files over to the running container and nodemon/React scripts will detect the changes and reload accordingly.

The second thing to solve is exposing ports and getting access to the services. This can be defined in the port forward section of the Skaffold configuration file. You define the resource type (e.g. Deployment or Service), resource name, and the port number. Skaffold does the rest and ensures that those services get exposed.

Now if you run the skaffold dev --port-forward the Skaffold will rebuild what's needed and set up the port forward based on the configuration. Here's the sample output of the port forward:

If you are doing any development for Kubernetes, where you need to run your applications inside the cluster, make sure you take a look at Skaffold. It makes everything so much easier. You don't need to worry about rebuilding images, syncing files and re-deploying - it is done all for you.

If you liked this article you will definitely like my new course called Start Kubernetes. This course includes everything I know about Kubernetes in an ebook, set of videos and practial labs.

I am always eager to hear your questions and comments. You can reach me on Twitter or leave a comment or question under this article.

Understanding the .map(), .filter() and .reduce() array methods in Javascript.

dropDesk - How I made Jira FRIENDLY!

Once suspended, peterj will not be able to comment or publish posts until their suspension is removed.

Once unsuspended, peterj will be able to comment and publish posts again.

Once unpublished, all posts by peterj will become hidden and only accessible to themselves.

If peterj is not suspended, they can still re-publish their posts from their dashboard.

Once unpublished, this post will become invisible to the public and only accessible to Peter Jausovec.

Thanks for keeping DEV Community safe. Here is what you can do to flag peterj:

Unflagging peterj will restore default visibility to their posts.