Some developers I work with are pretty bad at email. I get it, they're busy, and they tend to have a longer leash than other folks because their skillset is so valued. There's also an accepted stereotype that allows them to de-prioritize staying on top of email. While Slack, et. al. are somewhat diminishing the importance of email, there's no question it's still a critical tool for business communication, so building good habits is crucial for career advancement.

I spend much of my day sending out and responding to messages, and I pride myself on having a good system that helps me stay organized and efficient. I hope these tips help you regain some email sanity.

Head to your Gmail Inbox Settings and change your "Inbox Type" from Default to Priority. Doing so will get rid of those stupid tabs that come default nowadays, and will instead structure your inbox with multiple "folders" that you can immediately view at a glance.

Think about it: isn't it helpful to use multiple monitors at work? Or to have your command line open right alongside your text editor? Under the same logic, splitting the view on your inboxes will allow you to stay on top of the different email "buckets" from the same screen.

Priority Inbox also learns which emails are important over time, which helps you immediately identify the emails that matter most to you. It honestly does a pretty solid job, but you should still help train its understanding by marking / un-marking emails, especially early on.

Important and Unread: This is your standard "incoming" inbox. It's where most emails will arrive; think of it as your old inbox before you made these improvements. I think that Gmail tends to over-weight emails as "important," which definitely makes sense as I'd rather see too many emails than potentially miss an important message.

Requires Follow-Up: This inbox stores messages that you need to respond to. Whenever you have an important email that requires a response, simply add this label to the message. Think of it as your email "to-do list." This folder should be filled with messages that authentically require a response, not just emails that you'd like to keep on your radar. Those should belong in...

Starred: Starred messages should be notes that you want to keep tabs on, but that don't really require an explicit response. These can be things like a ticket confirmation, a schedule of start times for a sports team, a recommendation you want handy, things you don't need right now but want to check out eventually, etc.

Everything Else: This is your fall-back for everything else; whether it's an email that's already been read, replied to, and dealt with, or something that wasn't important in the first place. You can also think of this area as your "archive," even though you won't explicitly be using that built-in function. While it is possible for legitimately-important emails to initially land here, it's pretty rare -- especially if you're diligent about manually marking things as important / un-important in the early days. With my system now, I honestly can't remember the last time I missed an email due to it errantly landing here.

You'll be left with an inbox that looks like this: 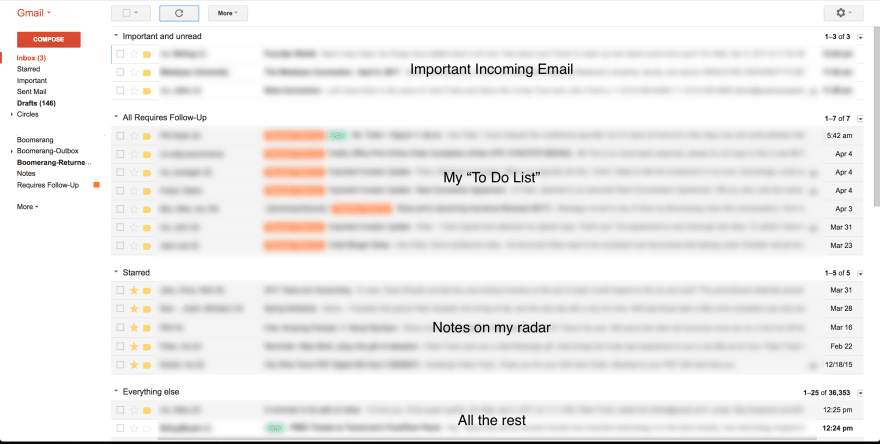 Now that you've got your "everything else" folder set up, let's clean it up even more. If you're like me, you probably get a ton of email that you just don't care about, but you've been lazy about unsubscribing or otherwise dealing with it. You also might want to continue getting these emails because occasionally there are coupons or deals, or you want to sporadically perform a search on a specific term. For emails like that, I have a system that helps me keep those out of the way, while still keeping them in my inbox.

Simply select every message that fits your criteria and create a filter to archive, mark as read, and never mark as important.

This filter will ensure you still have all of those emails at your disposal, but they stay out of your way.

I'll sometimes receive a note that doesn't fit in either "requires follow-up" or "starred." It's something that I don't want to forget about, but it's just not something I want to deal with right now. In those cases, I make use of an awesome Chrome extension called Boomerang. Boomerang has a few features, but I only use one: return this to my inbox later.

This simple feature is an incredibly powerful tool to helping you stay organized while avoiding the need to write things in a calendar/planner, or keep things in your mental cache.

Once you integrate Boomerang into your email workflow, you'll wonder how you ever lived without it.

The last tips I'll share relate to finding emails in your inbox. A lot of people don't realize that Gmail's search function is super powerful, especially if you use search operators and wildcards. I find myself making use of these sorts of queries:

Of course, this system isn't the only "right" approach for handling your Gmail inbox. But it's worked well for me, and I think it's a maintainable process that is conducive to additional improvements. Hopefully you're able to implement some of these suggestions to help your email game.

Please leave a comment if you have other Gmail tips!

How to write good software tests

Setup VS Code for Designer and Front-end Developers

Networking as a WebDev with Polywork