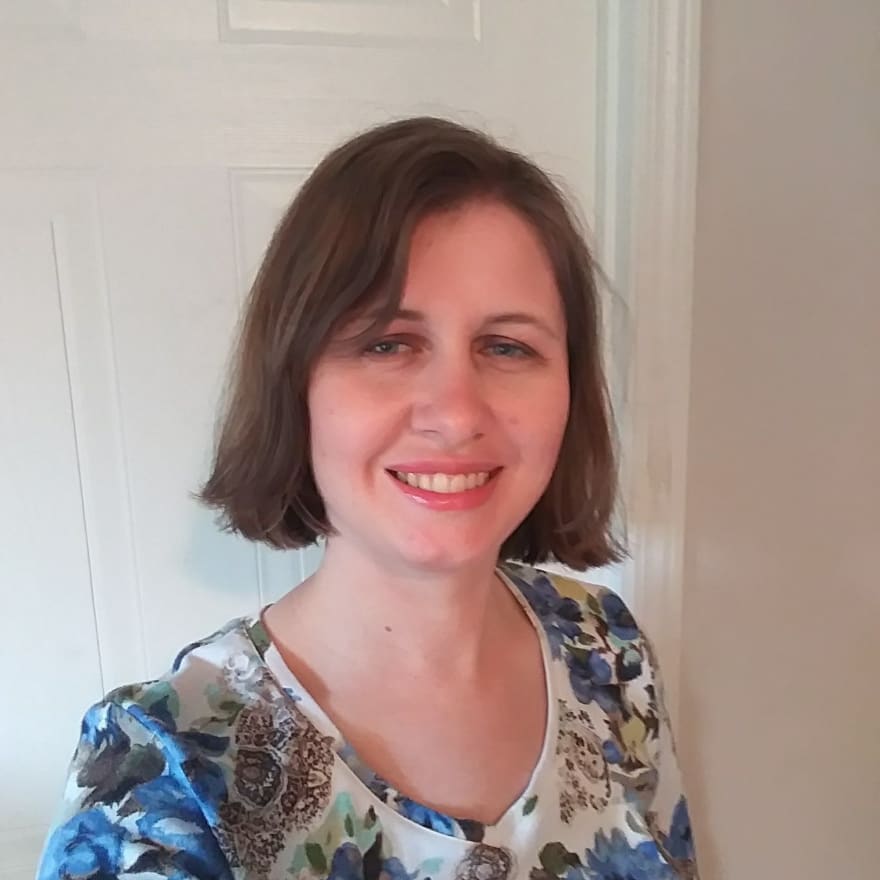 Today's interview is with Donna Amos, who learned to code remotely with Flatiron School from her home in Georgia. She was able to quit her job working as a server due to the coding skills she had acquired and now works as a Software Engineer. Donna has an inspiring story and nicely agreed to this exclusive interview where she shares her journey to becoming a developer.

Hey, sure, I live in Southwest Georgia and have for the past 6 years. I’m originally from Florida and met my husband when we were in college. I mostly have a background in food service and sales. I was working as a server at Olive Garden when my husband started trucking in 2017 and didn’t start coding until March 2018 after having my 4th child (he was born in November). I have a girl, Brooke (9) and three boys Seth(8), Gavin(5) and Logan(2).

Congratulations on getting your first Software Engineer role and quitting Olive Garden! Can you tell us how you got this job and what the process was like?

Thanks! It was really a long process to get to the job search but I didn’t have a long job search or even an “official” search at all. I’m going to write a blog post about it from start to finish. But in a nutshell, I started Free Code Camp March 2018 and finished January 2019. I spent a lot of time those last few months Googling how to get a tech job without previous experience.

I had no network and wasn’t anywhere close to a big city that had coding meetups. Everyone said if you don’t have a place to meet up with coders in person, to get on Twitter and build a network from there. They said it was more about knowing someone in the industry to get you in than about having a college degree and lots of certificates.

So, reluctantly I got on Twitter. I only had about 52 followers at the time and didn’t really know what to tweet about or who to follow. I Googled that too and mostly learned by watching others and sharing what I had learned and making funny stuff up when I was bored.

After about a month of applying to jobs and never hearing back from them, my husband suggested I do a paid coding boot camp. I found Flatiron School and jumped on it after only 2 days of research (which is huge, I usually research things to death but this one didn’t take long at all).

I got in and started February 2019. After a year and nearly finishing my last project, I put out a tweet asking hiring managers if they’d consider hiring a boot camp grad and got three responses asking if I’d be interested in talking with them about a position. The first didn’t work out but it was a good experience. The second turned out to be a Zoom interview for a remote full stack jr. developer position. Things went well and before I knew it we were scheduling a second interview, which turned out to be a run down of the position and a job offer. After the second interview I accepted later that same day and quit Olive Garden the next week.

I’m so grateful to God for this job. I hadn’t even been applying when this happened and had only one meeting with my boot camp career coach. It happened so quickly and seamlessly, I felt like I had cheated somehow. Of course, I know I hadn’t but it felt like it was too good to be true. And so far the job has been great. I’m at home with my kids working full time and my husband has time to recover from his trucking burnout and homeschool the kids. We couldn’t be happier.

I believe you started out with Free Code Camp after deciding you didn’t want to continue being a waitress. Can you tell us about that?

Sure. My husband had been a trucker for about 6 or 7 months and I had just had my 4th child in November 2017. It was around February 2018, when I kinda had a break down. I was already tired of being a trucker’s wife. It wasn’t that I wasn’t proud of him and what he was doing. I was. But I was tired of him being gone all the time and only getting to see him a few days a week. I had had enough! We talked it over and he suggested I start reading “48 Days To The Work You Love” by Dan Miller.

It was a good book but I only got through about 2 chapters when Stephen (my husband) suggested I look up Free Code Camp and see if I’d like coding. He had tried it and thought it was boring but thought maybe I would like it. I thought it wouldn’t go anywhere since I never thought I was much of a computer person. But after writing the first “Hello, World!” in HTML, I fell in love with it. It felt like magic putting one sentence on one screen and having it show up on another. And that’s how I started coding and was on my way to becoming a software engineer.

What was the process of applying for Flatiron School like?

The process generally consisted of filling out an application on their website and getting an interview with a recruiter. Once the interview was done, they got back with me within about four days to tell me they had accepted me into the program, though it can take up to seven days in some cases. Normally for on site students, they do a technical interview with live coding but since I was an online applicant, I didn’t have to do the technical interview.

What was the online course at Flatiron School like? How did they help you get a job?

Flatiron School has a great online program! They had everything divided up into modules where you’d first learn the language than the frameworks and libraries, each having a project at the end to ensure you understood the concepts before moving on. They had it set up with an IDE (Integrated Development Environment) with your text editor, terminal and GitHub account just as if you were working in a professional environment.

They had live chat if you needed help and you could schedule sessions with your instructor through Zoom (a video meeting program) if you were really stuck and share your screen. They also had instructional videos and blog posts by students (7 required blog posts to graduate) on various concepts and practical advice on getting through the program and finding the first developer job. After your fourth project (out of 5) was complete, they’d set you up with one of their career coaches and have you go through the career services program. I’d recommend them to anyone who was interested in becoming a developer.

What other resources did you use to learn programming?

Mostly through Google searches but some good resources I’d recommend are Udemy courses, Youtube videos, Twitter, Dev.to (a programmer blogging site) and of course Flatiron School. Some good things to learn as a developer would be GitHub, Git, and Visual Studio Code or another Text Editor.

I mostly Googled around to learn these and if there’s anything with set up you need to learn I recommend looking for a Youtube video first before asking for help from someone. Twitter would be my go to recommendation for networking. LinkedIn is good for a run down on what you’ve done but if you really want to talk to professional developers, I’d go with Twitter every time.

What was it like learning to code while working during the day at Olive Garden?

I only worked about 2 - 3 days a week there. Mostly what took up a lot of time was homeschooling my kids during the day. I would homeschool them during the day till about 3 p.m. and code up until about 5 p.m. and then code again from about 8 p.m to midnight and those were the days I wasn’t working. Work days I got even less coding done. It was hard but I stuck with it. And that’s really all you need to do to be successful, as cliche as that sounds.

What advice would you give someone considering taking the Flatiron School program?

I’d recommend they do some Free Code Camp first to see if they like coding before they invest that much time and money into an intensive program like Flatiron School. Once they’ve figured that out, there’s no better place to train for real world coding experience than Flatiron School. They’re one of the top coding boot camps and have a great career program to get you on track to get your first programming job.

What does your working day look like now you are a professional developer?

Right now I’m working on learning C# ( C Sharp) a backend language used by my company. I’ve been reading up on it mostly during the day but have fixed a few bugs that were simple enough for me to do. I’m working on becoming more self-sufficient every day but also working on communicating effectively with my team. Every day is different and that’s mostly what I like about coding in the first place.

I Need Your Critique to Become a Better Developer!

4 Powerful IDEs That Nobody Is Talking About

Pete
Hey, I'm a developer based in Edinburgh, Scotland. I make www.nocsdegree.com where I interview devs without degrees. I also make www.nocsok.com where I list jobs for devs without degrees.
A CTO gives advice on learning to code
#webdev #career #beginners
A self-taught web developer talks making $100k from his business
#webdev #beginners #career
From newbie to software engineer in 9 months
#beginners #career #webdev