If you are a developer, chances are you have used or read about CLIs already (maybe to execute git or npm commands or in some library's documentation).

I work with multiple CLIs every day (docker, dotnet, npm, git, etc.), but I had never stopped to learn much about their structure or syntax until recently. Reading documentation and examples is usually enough to get by.

However, I'm currently developing my own CLI for a personal project, so I decided to learn more about CLI design, structure, syntax, and conventions. I did my research, which I documented and decided to share here in this post.

A CLI or Command Line Interface is an application that handles user interaction through the Command Line.

They don't have graphics (except, maybe, for ASCII Art 😂).
All the information is presented to the user in the form of text and the user interacts with it by typing in commands.

CLIs can be faster than GUIs for certain tasks (especially for monotonous tasks and when you're already familiar with the commands). One of the main advantages they have over GUI is that they're easier to *automate* (running "npm install" in a CI pipeline could be a lot trickier without a CLI).

Most CLIs are designed with the following structures: 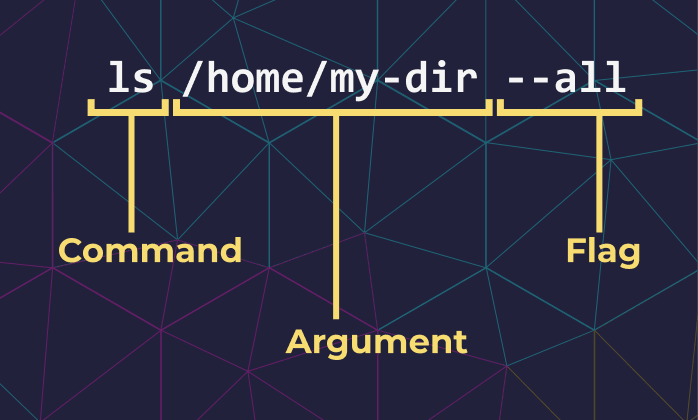 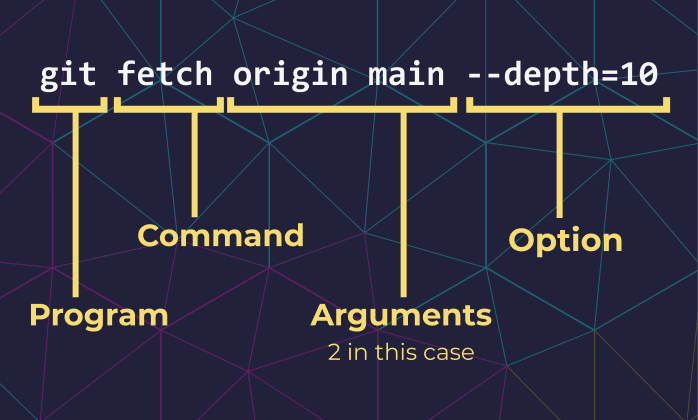 Commands are usually represented as verbs and programs as nouns (as they are usually a short version of the program's name). There are some cases where a second (or third, or more) noun is used to narrow the scope in which the command will operate, for example:

Here, we have the program (docker), the context (container), and the command (start).

Arguments in a CLI allow users to send data to the application, sometimes in a command context. They are often called positional arguments because they are identified by their position, which means users must write the value for each argument in the correct position.

They can be required or not. If they are not required, the command's behavior may vary in the absence of the parameter, often using a default value instead.

Options are named parameters that can be passed to a command and are represented by key-value pairs.

Unlike positional arguments, their position is not important.

You're probably familiar with the following example:

Options are usually (not always) used to represent optional parameters. In most cases, if a parameter is required, a positional argument is the best way to go.

Some options have aliases, which are short versions of the same option, easier to type and remember. They're usually identified by a single dash prefix:

Different delimiters are supported, depending on the CLI and Operating System. These are some of the most common:

Options that don't require a value are often called Flags. They are boolean, meaning their presence indicates "true" and their absence "false".

Some examples of commands using flags:

Informing our users about the available commands and their arguments and options can be tricky without a GUI.
That's when the --help flag comes in.

When we include the help flag after a command, we ask the CLI to give us more information about it.
Usually, this information will include a short description of the command, arguments, options, and aliases.

Similarly, git CLI prints a summary of the command briefly explaining how to use it when we use -h, but redirects to the offline HTML documentation when we use --help:

Learning about the different levels of verbosity was really helpful (I've been using it frequently), although it's a shame there's not a standard for it.

For example, both dotnet CLI and npm CLI will open a browser and redirect you to the command's full documentation when we use the help command:

When reading a CLI's documentation or a "man" page, you'll likely come across a particular syntax used to describe commands, their arguments, and options (located often under "Synopsis").
I used to not pay much attention to it (other than trying and figuring out the general anatomy of the command) and going straight to the examples. But after learning about it and how to interpret it, these descriptions have become much more useful to me.

Required parameters are often represented using just the name of the param, although in some cases, you may find them between angle brackets:

5.3. Arguments that can receive many values

Ellipses indicate the argument/option expects many values. It can be applied to optional or required parameters

Here's how it looks like applied to optional parameters:

The previous statement tells us our parameter expects 0 to N values.

Required parameters that receive many values are usually represented in one of two ways. Here is one of them:

This statement tells us the command receives at least a single value for <myParameter> but can also receive more values, represented by [myParameter...] resulting in 1 to N values.

Here's an example from the Docker CLI:

When executing the start command, we must specify at least one container, but we can also start more than one in the same command.

The second way of representing required parameters with many 1 to N values is as follows:

Since we are not using square brackets, it's clear myParameter is required, which indicates it needs at least one value (1 to N).

We need to specify at least one directory to create when using mkdir, but we can also create more than one.

Some arguments cannot be used together in the same command. Their exclusive relationship is represented using pipes:

The square brackets tell us we don't have to use any of those options, and the pipe tells us that, if we decide to use them, we can't use them both at the same time. So any of the following are valid:

But the following would be invalid:

An example from git commit:

Here's what happens when we try to use -a and --patch together:

This syntax is often used to represent aliases: git remote [ - v | --verbose ]. Both flags are valid individually, but it doesn't make sense to use them simultaneously.

Similarly, there are cases when at least one option must be included. In those cases, we use vertical bars, and we group the parameters using curly brackets or parentheses, like so:

The curly brackets or parentheses indicate that at least one option must be included.

Here's an example from git remote:

If we don't use any of the required options, we get this error:

Another example from dotnet new:

I know I could have developed my CLI without stopping to learn any of this. After all, there are libraries that would take care of the syntax and interpretation of commands. Nonetheless, I found it extremely interesting, and I have been using this new knowledge a lot after acquiring it. Finding and reading CLIs documentation has become a lot easier, and I learned many tips that will definitely help me develop a better, more intuitive CLI following the conventions and standards described in this article.