NLP is subfield of linguistic, computer science and artificial intelligence (wiki), and you could spend years studying it.

However, I wanted a quick dive to a get an intuition for how NLP works, and we'll do that via sentiment analysis, categorizing text by their polarity.

We can't help but feel motivated to see insights about our own social media post, so we'll turn to a well known platform.

To find out, I downloaded 14 years of posts to apply text and sentiment analysis. We'l use Python to read and parse json data from Facebook.

Finally, we'll transition our work flow to R and the tidyverse for data manipulation and visualization.

Below, I named my file your_posts_1.json, but you can change this.
We'll use Python's json module read in data. We can get a feel for the data with type and len.

Here are the Python libraries we use in this post:

Natural Language Tookkit is a popular Python platform for working with human language data. While it has over 50 lexical resources, we'll use the Vader Sentiment Lexicon, that is specifically attuned to sentiments expressed in social media.

Regex (regular expressions) will be used to remove punctuation.

Unicode Database will be used to remove non-ASCII characters.

JSON module helps us to read in json from Facebook.

Inflect helps us to convert numbers to words.

Pandas is a powerful data manipulation and data analysis tool for when we save our text data into a data frame and write to csv.

After we have our data, we'll dig through to get actual text data (our posts).

Note: the data key occasionally returns an empty array and we want to skip over those by checking if len(v) > 0. 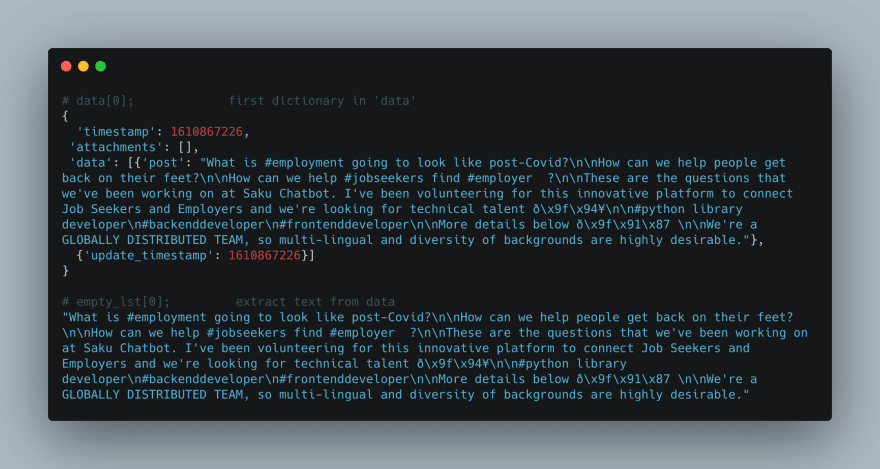 We'll loop through our list of strings (empty_lst) to tokenize each sentence with nltk.sent_tokenize(). We want to split the text into individual sentences.

For context on the functions used in this section, check out this article by Matthew Mayo on Text Data Preprocessing.

Example stopwords are: your, yours, yourself, yourselves, he, him, his, himself etc.

This allows us to have each sentence be on equal playing field.

The below screen cap gives us an idea of the difference between sentence normalization vs non-normalization.

NOTE: The process of stemming and lemmatization makes more sense for individuals words (over sentences), so we won't use them here.

You can use the FreqDist() function to get the most common sentences. Then, you could plot a line chart for a visual comparison of the most frequent sentences.

Although simple, counting frequencies can yield some insights.

We'll use the Vader module from NLTK. Vader stands for:

We are taking a Rule-based/Lexicon approach to sentiment analysis because we have a fairly large dataset, but lack labeled data to build a robust training set. Thus, Machine Learning would not be ideal for this task.

To get an intuition for how the Vader module works, we can visit the github repo to view vader_lexicon.txt (source). This is a dictionary that has been empirically validated. Sentiment ratings are provided by 10 independent human raters (pre-screened, trained and checked for inter-rater reliability).

sentiment captures each sentence and sent_scores, which initializes the nltk.sentiment.vader.SentimentIntensityAnalyzer to calculate polarity_score of each sentence (i.e., negative, neutral, positive).

sentiment2 captures each polarity and value in a list of tuples.

The below screen cap should give you a sense of what we have:

After we have appended each sentence (sentiment) and their polarity scores (sentiment2, negative, neutral, positive), we'll create data frames to store these values.

Then, we'll write the data frames to CSV to transition to R. Note that we set index to false when saving for CSV. Python starts counting at 0, while R starts at 1, so we're better off re-creating the index as a separate column in R.

NOTE: There are more efficient ways for what I'm doing here. My solution is to save two CSV files and move the work flow over to R for further data manipulation and visualization. This is primarily a personal preference for handling data frames and visualizations in R, but I should point out this can be done with pandas and matplotlib.

From this point forward, we'll be using R and the tidyverse for data manipulation and visualization. RStudio is the IDE of choice here. We'll create an R Script to store all our data transformation and visualization process. We should be in the same directory in which the above CSV files were created with pandas.

We'll load the two CSV files we saved and the tidyverse library:

We'll create another column that matches the index for the first data frame (sent_sentiment.csv). I save it as df1, but you could overwrite the original df if you wanted.

Then, for the second data frame (sent_sentiment_2.csv), we'll create another column matching the index, but also use pivot_wider from the tidyr package. NOTE: You'll want to group_by label first, then use mutate to create a unique identifier.

We'll then use pivot_wider to ensure that all polarity values (negative, neutral, positive) have their own columns.

By creating a unique identifier using mutate and row_number(), we'll be able to join (left_join) by row.

Finally, I save the operation to df3 which allows me to work off a fresh new data frame for visualization.

First, we'll visualize the positive and negative polarity scores separately, across all 3194 sentences (your numbers will vary). 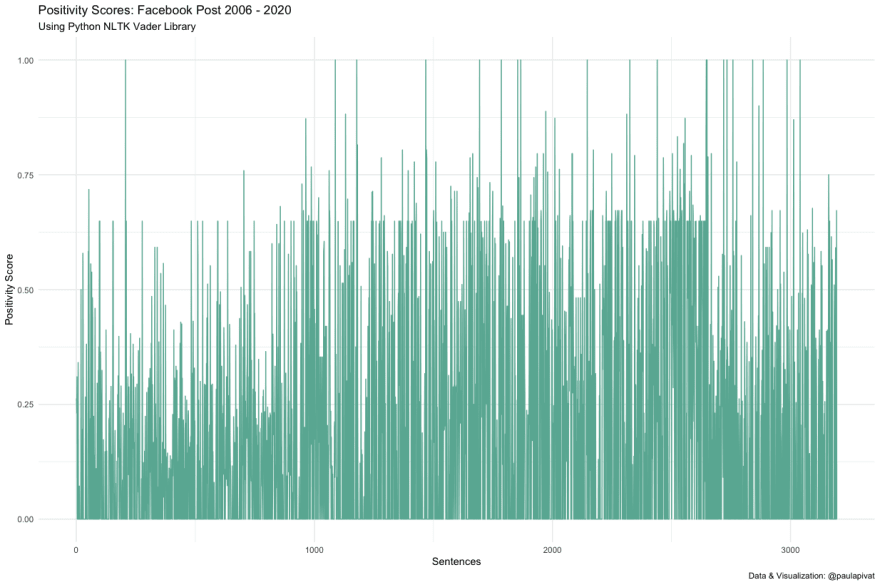 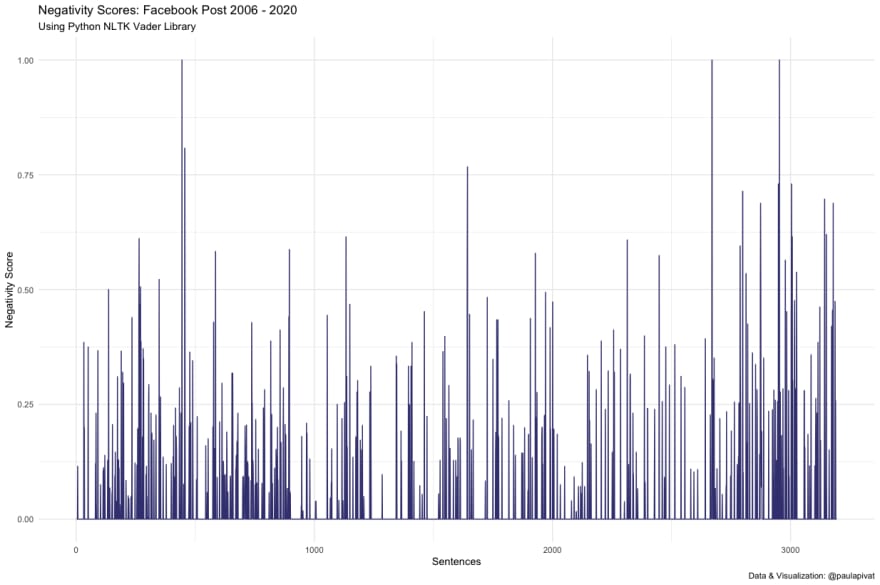 When I sum positivity and negativity scores to get a ratio, it's approximately 568:97 or 5.8x more positive than negative according to the Vader (Valance Aware Dictionary and Sentiment Reasoner).

The Vader module will take in every sentence and assign a valence score from -1 (most negative) to 1 (most positive). We can classify sentences as pos (positive), neu (neutral) and neg(negative) or as a composite (compound) score (i.e., normalized, weighted composite score). For more details, see vader-sentiment documentation.

Here is a chart to see both positive and negative scores together (positive = blue, negative = red, neutral = black). 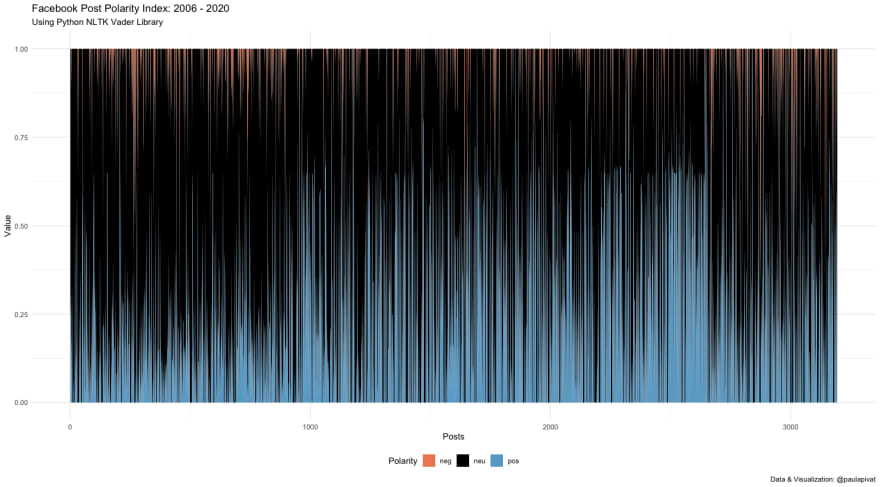 Finally, we can also use histograms to see the distribution of negative and positive sentiment among the sentences: 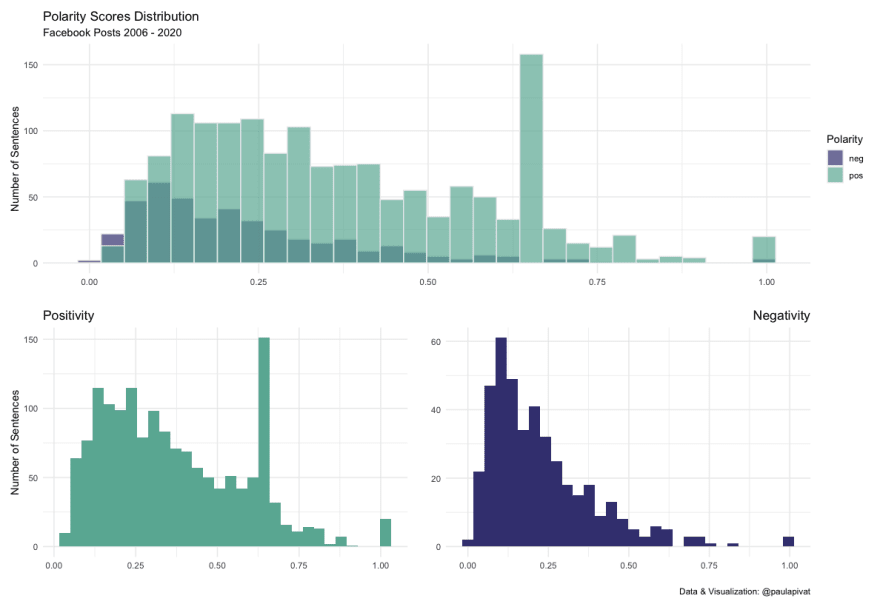 It turns out the Vader module is fully capable of analyzing sentences with punctuation, word-shape (capitalization for emphasis), slang and even utf-8 encoded emojis.

So to see if there would be any difference if we implemented sentiment analysis without normalization, I re-ran all the analyses above.

Here are the two version of data for comparison. Top for normalization and bottom for non-normalized. 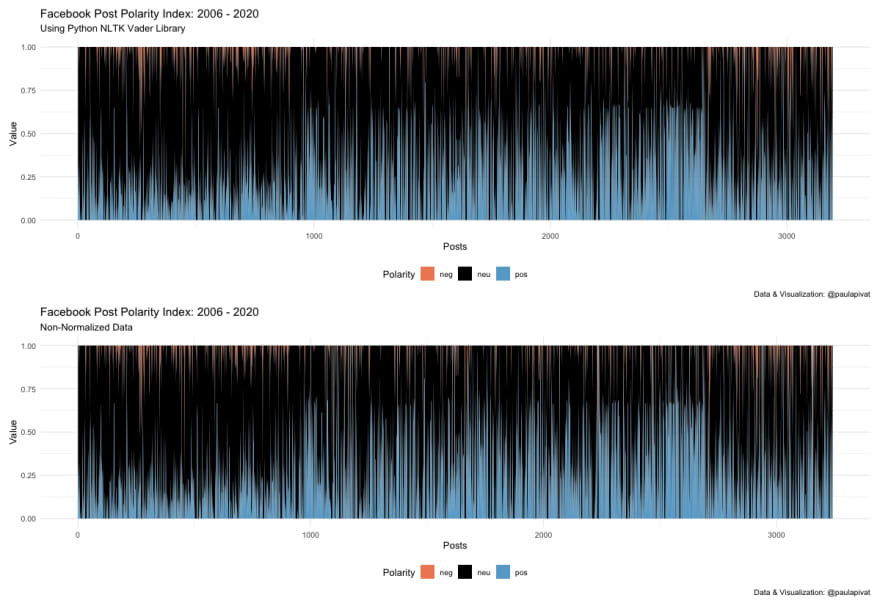 While there are expected slight differences, they are only slight.

I downloaded 14 years worth of Facebook posts to run a rule-based sentiment analysis and visualize the results, using a combination of Python and R.

I enjoyed using both for this project and sought to play to their strengths. I found parsing JSON straight-forward with Python, but once we transition to data frames, I was itching to get back to R.

Because we lacked labeled data, using a rule-based/lexicon-approach to sentiment analysis made sense. Now that we have a label for valence scores, it may be possible to take a machine learning approach to predict the valence of future posts.

How to build your own LinkedIn Profile Scraper in 2022

Learn Python as a Javascript developer

Once suspended, paulapivat will not be able to comment or publish posts until their suspension is removed.

Once unsuspended, paulapivat will be able to comment and publish posts again.

Once unpublished, all posts by paulapivat will become hidden and only accessible to themselves.

If paulapivat is not suspended, they can still re-publish their posts from their dashboard.

Once unpublished, this post will become invisible to the public and only accessible to Paul Apivat .

Thanks for keeping DEV Community safe. Here is what you can do to flag paulapivat:

Unflagging paulapivat will restore default visibility to their posts.