While learning about SOLID principles, specifically Dependency Inversion (D of SOLID), we come across references and confusions surrounding Inversion of control. Reading about the two did no give me straightforward answers. On top of it, looking at the sample code for the patterns referred to, for implementing Inversion of Control did not seem like inverting any control. Hence, I started checking stack overflow, blogs, et al. Writing this blog to share my understanding and collation of that information.

Before getting into details, the statements from Martin Fowler's article which gave me the right direction on differentiation on these three:

DI is about wiring,
IoC is about direction,
and DIP is about shape.

This gave a good perspective of how to look at definition and details for each of these.

Lets try to break down couple of these terms -

Being dependent means to require someone or something to support. Dependency in object oriented world is a relationship between objects, where, one object is dependent on other object(s) for its implementation. Think about hierarchy, inheritance, composition, etc.

Being in control means, to be able to determine the behavior or supervise the running of or maintain influence or authority over. So here we are talking about how functionality is executed or which portion of the application is taking control to execute a particular function.

Dictionary definition of inverted is - put upside down or in the opposite position, order, or arrangement. So in this case as well we are talking about inversion in terms of something being inverted or opposite direction. "What", we will come to in a minute.

Taking the above definition and dictionary references together and putting simply, we get - the direction of which object depends on which objects is inverted.

While thinking about Dependency Inversion - Think about shape of the object. 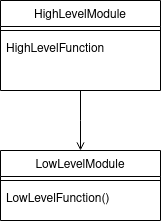 Inversion of control reflects the model of relationship between a caller and callee. In classic flow of control the client has full control on environment and sequence of calls to library methods. But in case of IoC, callee takes control over some calls between callee and caller e.g. call-backs. Think about direction in flow of control. This is a common experience while extending functionality of a framework.

The control is inverted - it calls me rather me calling the framework. This phenomenon is Inversion of Control (also known as the Hollywood Principle - "Don't call us, we'll call you").

According to Wikipedia,dependency injection is a technique in which an object receives other objects that it depends on, called dependencies. Instead of the client specifying which service it will use, the injector tells the client what service to use.

Thus, Dependency injection is a way to implement IoC. Where the control to create the object is not with the class itself. Think about wiring up of the objects to the classes which need to use them.

Some examples of IoC:

Below are some techniques of implementing IoC. However, there were some gotchas for me which I've described here. For details of what / how of these techniques, please check those individual topics else where.

Dependency Injection: Dependency is injected at run time by DI container.The class receiving the object has not control on which actual object is created or how.

Strategy Pattern: In this pattern, the strategy / functionality / behavior can be swapped out at runtime.

As against most examples we find for implementation of strategy pattern, if we are looking at this pattern from IoC point of view then the responsibility of selection of strategy / function / behavior should be done by a different class. The client does not need to know which strategy to select. If strategy selection is done by client then it is not IoC.

Service Locator: In service locator the class requests for the object (or service) by name. If object does not exist then it would create the object and return (like factory pattern). However, if it exists then it will just return that object from cache (like registry pattern).

Template Method: It defines skeletal operations in terms of high level steps. Actual implementation of those steps is done by sub class.

And a play method as -

Now, sub-classes like Cricket or Soccer will implement Start(), Score() and End() functions. When client creates object of sub-class and executes play method the Start(), Score() and End() functions get called in sequence. The sequence of these calls are in turn inverted control as Cricket or Soccer classes have no control on when they get called.

With all the people trying to simplify the understanding of Inversion of Control and Dependency Inversion Principle the only thing giving me clear direction was these words from Martin Fowler - DI is about wiring, IoC is about direction, and DIP is about shape. Additionally, patterns referred to which help in implementing IoC need to be implemented in specific way else they are true to the pattern but are not implementing IoC. Hope this article sheds some light on those items as well.

Once suspended, parasmm will not be able to comment or publish posts until their suspension is removed.

Once unsuspended, parasmm will be able to comment and publish posts again.

Once unpublished, all posts by parasmm will become hidden and only accessible to themselves.

If parasmm is not suspended, they can still re-publish their posts from their dashboard.

Once unpublished, this post will become invisible to the public and only accessible to parasmm.

Thanks for keeping DEV Community safe. Here is what you can do to flag parasmm:

Unflagging parasmm will restore default visibility to their posts.